Nepal Needs To Clear Its Agenda To Present In BRI

Dr. Sharma called attention to the ambiguities present in the project financing modality for the projects to be included in the BRI 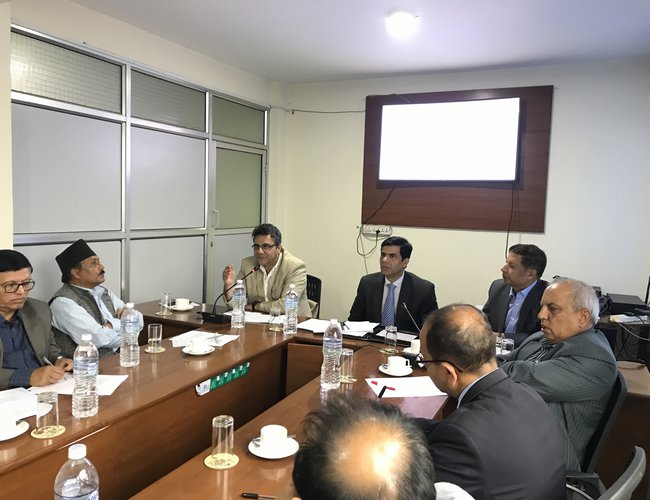 Former vice chairman of National Planning Commission and former ambassador to U.S. Dr Shankar Prasad Sharma said that since the BRI is an evolving process, onus is on Nepal to negotiate terms that are beneficial to us.

Organized by SAWTEE-Centre for Sustainable Development on China’s Belt and Road Initiative, experts pointed out various options during a roundtable discussion.

The event was organized to add to the discourse on how to align Nepal’s development plans with the China’s multi-regional connectivity initiative—the Belt and Road Initiative (BRI).

The BRI basically is an infrastructure investment program creating a web of transportation system including roads, railways, telecommunications, energy pipelines, and ports across regions.

Dr. Sharma called attention to the ambiguities present in the project financing modality for the projects to be included in the BRI.

Gyan Chandra Acharya, former Under-Secretary General, United Nations and head of SAWTEE-CSD, pointed out that it is evident that Nepal till date does not have clear vision on how best to proceed with the BRI, hence, discussions like these could be instrumental in shaping the future courses.

Dr. Posh Raj Pandey, Chairman, South Asia Watch on Trade, Economics and Environment (SAWTEE), pointed out that much of the BRI discourse is only dominated by infrastructure issues, but there should also be focus on towards being integrated to Chinese value chain through investment.

Dr Surya Raj Acharya, infrastructure expert, cautioned that Nepal is stuck in perpetual policy-trap that is preventing discourse on the BRI modality from gaining momentum.

Dr. Mahesh Kumar Maskey, Former Ambassador to China, said that instead of vying for viable projects, such as cross-border Special Economic Zones, Nepal is more focused on dubious projects such as railways, which has become counterproductive.

The participants present in the discussion program had a consensus view that Nepal should have a clear agenda for its national interest so as not to be swayed by peripheral issues. The round table brought together a cross-section of stakeholders, including policy makers, diplomats, scholars, and private-sector.

Nepal Is Working With India To Resolve Kalapani Issue By NEW SPOTLIGHT ONLINE 13 hours, 24 minutes ago