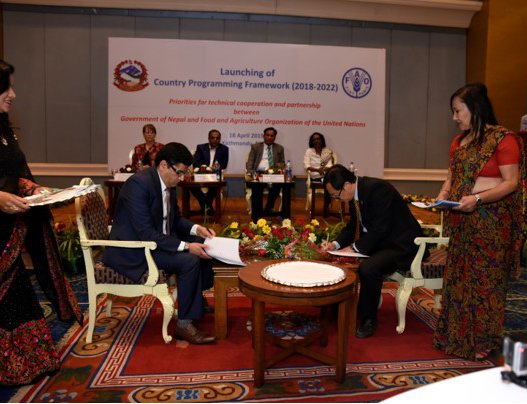 The Government of Nepal and the UN’s Food and Agriculture Organization (FAO) today signed a five-year framework agreement on technical cooperation and partnership to improve food and nutrition security in Nepal, while safeguarding and sustainably managing the use of natural resources. 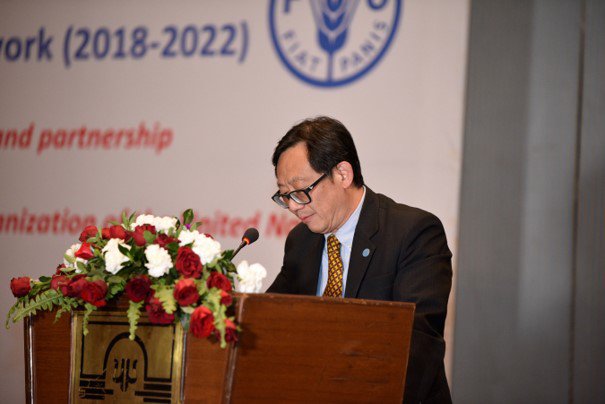 The CPF intends to help the government achieve three primary goals and enable the delivery of three priority outcomes. The first is to enhance sustainable agricultural production and productivity, marketing and consumption for the eradication of hunger and malnutrition. The second is to enhance natural resource management and agricultural production systems, making them resilient to climate change and disasters. The third relates to inclusive and gender responsive livelihoods enhancement and poverty reduction.

“The CPF is important on many levels but primarily because it helps us to reach our critical global goal of SDG-2 – the Zero Hunger Goal, which is a goal the countries of this world have pledged to reach by 2030,” said Kadiresan.

FAO’s Assistant Director-General emphasized the importance of developing greater resilience in the face of climatic events and disasters, such as the earthquakes – and more recently the floods in 2017 – that resulted in more than half-a-billion dollars in damages. More than US$ 170 million in agricultural losses were severe threats to food security and nutrition, Kadiresan added.

Appreciating the initiatives of the Government of Nepal to include the Food and Nutrition Security Plan of Action (FNSPA) developed by FAO as an integral component of Nepal’s Agriculture Development Strategy (ADS) 2015 to 2035, Kadiresan hoped that the FNSPA would not only complement the implementation of the ADS flagship programme on food and nutrition security but would also help accelerate the food-based approaches designed to reduce the rates of maternal and child under-nutrition.

The Democratic Republic of Nepal became a full member of the Food and Agriculture Organization in October 1951. The FAO Representation office was established here in 1977 and FAO has had a permanent presence in Nepal for more than 40 years. It has provided policy advice and technical support for capacity development.

During seven decades of partnership with government and others, FAO has implemented more than 300 projects in the fields of agriculture, livestock, forestry development and agricultural value chains. These projects have worked to help achieve greater food security, nutrition, rural income generation and economic empowerment of rural women. Emergency assistance programmes have helped build back agricultural systems in post-disaster areas, and to better adapt and mitigate the effects of climate change and respond to transboundary animal diseases.

“FAO values the partnerships developed with Nepal over these many decades. The launch of this CPF is a testament to that continuing commitment,” Kadiresan said.

Australia Is Proud Of Our partnership With Nepal: Ambassador Budd By NEW SPOTLIGHT ONLINE 20 hours ago

Nepal Has Made Many Progress: Prime Minister Oli By NEW SPOTLIGHT ONLINE 1 day, 11 hours ago