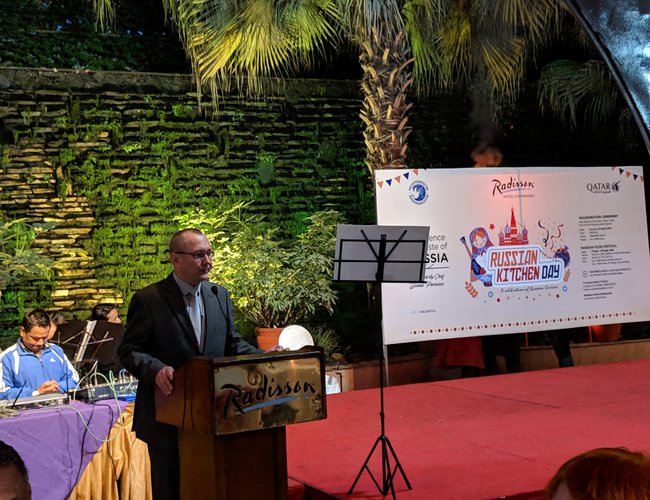 Along with its diversity in geography, culture and lifestyle, Russian Federation too has diversity in food. This is what Nepalese people have seen in the five-day long Russian Food Festival held in Radisson Hotel, Kathmandu.

Prepared by renowned Russian Chef Denis, Hotel Radisson offered over dozen different Russian foods to the visitors. Inaugurated on 6th of April with attendance of over 500 people, the first day was the day to know and see Russia. Along with food and Vodka, a group of Nepali artists and Nepal based Russians showed folk dance, Piano, Violin, Fire acts and musical performance. 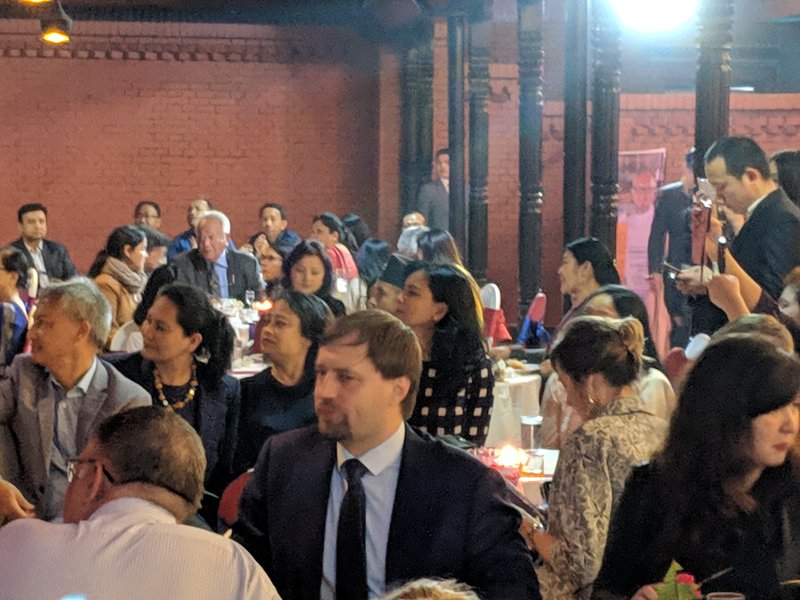 Yuliya Androsova, director of Russian Centre of Science and Culture, said that the food was also a part of identity of nation like literature, art and music. She said that each nation has its own food and Russia is not an exception.

“Being a big country, Russia had food varieties in numbers and tastes as well. Along with food festival, there is also the cultural and musical show,” said Director Andorsova, addressing a press conference at Hotel Radisson on Russian Kitchen Day 2019.

With the celebrity Russian chef Denis Perevoz and his assistant Chef Shmakov hailing from Moscow in charge of the event, Hotel Radisson Kathmandu was hosting the food festival, which is for the first of its kind in Nepal. “We are determined to showcase the best of Russian Gastronomy in terms of taste, flavor, presentation and overall delight. The buffet layout by our chefs will purposefully serve finest dishes like Borscht, Pozharskaya, Salted herring, Okroshka, Stroganof for the ultimate wholesale feat,” said Hotel Radisson Kathmandu in its press release.

“The motive of the festival is to enhance and promote the amalgamation of Russian Culture and Russian food, introduce the Russian Gastronomy to the people of Nepal,” said General Manager Subrata Banerjee.

Replying to the queries of journalists, celebrity Russian chef Denis Perevoz said that he will provide world class Russian food from different parts of Russia. “We have set menus with 10 different foods but they will represent the general food of Russia,” aid Chef Denis. Russia is a big country and it has a wide diversity of food.”

Denis is a well-known Russian chief combining his fundamental knowledge of classic cuisine, innovative approach to food technologies and modern ways of serving. During his 20 year career, he gained valuable experience working at several reputable restaurants in Russia.

Graduated from Russian State University of Trade and Economics and Russian Tourism Academy as food process engineer, his dedication led him to train with some of the world’s leading chefs in World’s renowned restaurants including Paul Bocuse in France, La Pergola Restaurant in Italy and Arzak restaurant in Spain.

Utpal Kumar Mondal, Executive Chef of Radisson Hotel Kathmandu, said that Russian Chef Perevoz is a world class Chef with wide experiences. He said that they will offer a world class Russian food during the festival.

“Radisson Hotel Kathmandu Takes an immense pleasure to host the Russian Food Festival 2019 at the The Fun Café of Radisson Hotel from 6th April 2019-12th April to promote Russian culture and cuisine to local and international guests,” said a press release. 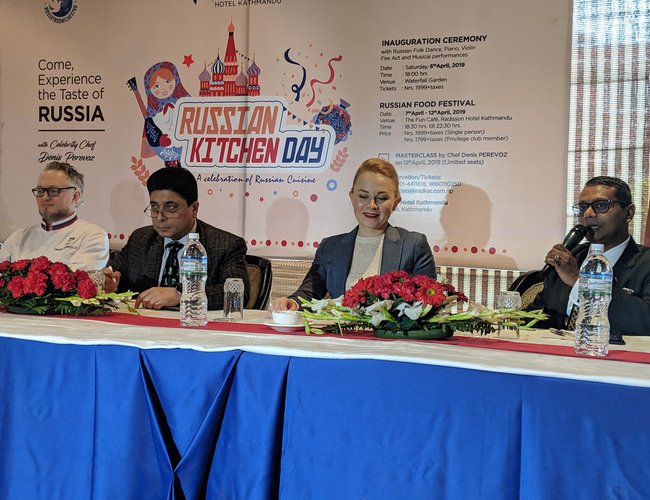 The eventful festival will provide a Russian cultural demonstration comprising of Russian décor in the restaurant, traditional dance, music, instrumental performances and a special Fire Act all the way from Russia on the opening day of the festival.

“Traditionally dressed ladies and gentlemen will welcome the guest while they take a shot at the Russian Vodka Station listening to the mesmerizing BALALAIKA being played through the channels. Forget me not calls the CAVIVAR Station, me too travelled from Moscow to tantalize your taste buds,” said press release.

The invitees for the opening day of the festival will be the dignitaries, important socialites of Kathmandu and diplomatic community. “The price of the Russian buffet is Nrs, 1999+24.3 percent taxes. Master class entry fee is NRs 2499. 00 net,” said the Hotel. “There will be special package for Russian Standard Vodka, Beer, buckets and many more.”