Our 70th anniversary provides us with the opportunity of further developing our shared bonds. 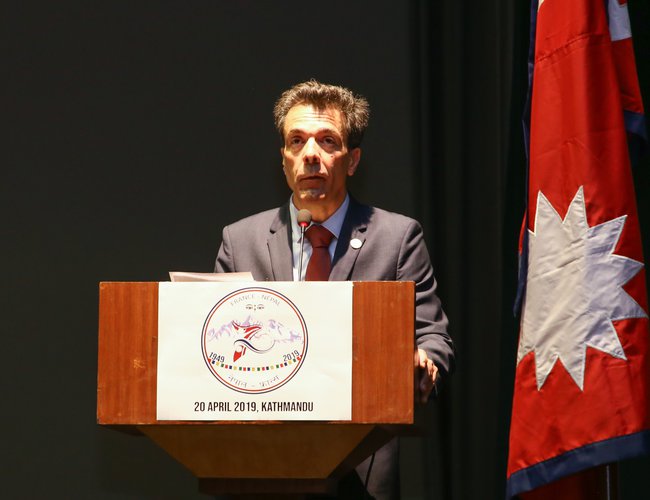 Four days later, on 24th, the French ambassador to India, Daniel Levi, came to Kathmandu to give his credentials. For today’s ceremony, I am very grateful that the Hon. Foreign minister Gyawali is with us representing the government of Nepal.

I am also very grateful that Miss Nepal World 2018, Shrinkhala Khatiwada, accepted to be our goodwill ambassador for this year of commemoration, to express the voice of the civil society, of the young generation, the one who will be in charge after most of us.

To characterize relation between France and Nepal, I would like to employ an African proverb : “only mountains cannot meet”. It means that human life is made of communication and is full of opportunities. But today I would like to say : “Nepal is the country where mountains can also meet”. And, to illustrate that, I can give you some examples.

Allow me to remind you of the first famous French travellers who wandered on foot across thesemountains : Sylvain Levi, Alexandra David-Néel, Isabelle Massieu.

Let’s also remember the many researchers who have come here since the 60s :

-Corneille Jest, who surveyed wide areas of the western part of this country, and left maps, movies, hundreds of booknotes, which he shared with generations of students. Unfortunately, he passed away in January this year, and I would like to pay a special tribute to him.

- Gérard Toffin, a renowned expert amongst the French scientific community, on rural and urban Newar communities and Newari culture and architecture,

These are just two examples which highlight dedicated and impressive research of the region.

In that regard, I would like to mention two Nepali cities that are symbols of our common history :

-Panauti : not far from Kathmandu, where France and Nepal have had a long lasting shared history in the preservation of culture and heritage, and where we have a lot of friends,

- Salme in Nuwakot district : which hosted more than 40 French researchers during between 1979 and 1985,

-Next year we will celebrate the momentous ascent of Annapurna in 1950, led by Maurice Herzog and his French and Nepali climbing partners; Pierre Mazeaud, the French alpinist and politician was the first French national to climb Everest in 1978.

-This opened the way to a long lasting cooperation in the field of mountain guides’ training between Nepal and ENSA in Chamonix. Dozens of people have benefited from this training.

-As we can see, Chamonix, Mont-Blanc, and Nepal have a long history in common and are much closer than we may imagine.

Nowadays we have more than 32.000 French tourists coming to Nepal every year.

Let’s mention our very significant cooperation in the field of seismology: Nepalese mountains are interconnected through a network of 22 stations, to monitor earthquakes.

As you can see, the bedrock of our relation is people to people exchange. 500 French associations are actively engaged in relation with Nepal. I have met many of these people. Most of them come to Nepal initially for tourism and mountaineering, and then get engaged in various development projects. They are impressed by Nepali people who, despite difficult lives, continue to exude kindness, a sense of hospitality and their smile. They want to reciprocate this Nepali welcome. They are truly convinced that Nepali people have a lot of energy and a great potential, and that they deserve their support. In fact, let’s say, they fall in love with Nepal.

In both countries, we have very active entities and organizations:

The “French team”, which comprises of the Embassy, the Alliance Française in Kathmandu and its board members, the French School, the Nepal France Chamber of Commerce, is fully dedicated in the mission in taking our bilateral relation to a high level.

The French community in Nepal is strong and supportive. Some have been living here for decades. All are true friends of Nepal. They were very helpful and compassionate after 2015 earthquake. I would like to convey my warm appreciation for that.

The Nepali friends of France are also very active. Those who live in France are very involved in bilateral relation and association activities. I have found their relationship with France personally very inspiring. I would like to commend their engagements, a to give a special mention to the Collectif France Nepal and the Nepal France Friendship Society who are our partners in advancing this People 2 People relation further.

My colleagues and I were deeply moved by the dozens of messages of sympathy we received after Notre Dame cathedral blaze on Monday. It reminded us of the aftermath of the 2015 earthquake, the resilience and the impressive willingness to rebuild collapsed monuments, that we could witness here : our love for cultural and spiritual heritage is one of the many elements Nepal and France have in common.

France and Nepal enjoy democracy and both countries guarantee freedom of opinion and freedom of speech; not to mention a vibrant media community. Both countries truly believe in independence, peaceful resolution of conflicts and multilateralism : our soldiers stand shoulder to shoulder in peace keeping operations.

On this solid bedrock, we can look forward with confidence to the next 70 years of shared community and friendship and to continue building together our relation.

Our 70th anniversary provides us with the opportunity of further developing our shared bonds.

-We can facilitate more business opportunities, as we already have in the field of communication satellite, security printing, or urban transportation. We also held a very productive B to B seminar with the FNCCI just a few weeks ago. There are many such possibilities in the future.

- We can continue to promote culture and are working on facilitating an exhibition of remarkable Nepali art in Paris, an event which would no doubt raise the profile of Nepal as a cultural destination

This embassy, in the continuity of our predecessors, and in cooperation with the Ministry of Foreign Affairs of Nepal and the Nepali Embassy in France, will do its best to enhance bilateral relation.

So, at the end, you see, everything gets linked: mountain and people, friendship and solidarity, and common values. That is why I say : “Nepal is the country where mountains can also meet”.

I would like to thank the Nepali Army for kindly hosting us here in your beautiful auditorium, also thanks to KhabarHub for providing us its support, and to Nepal Investment Bank for its continuing support.

François-Xavier LEGER is the ambassador of France to Nepal. This I an excerpt of the remarks by Ambassador delivered on April 20th, 2019 during the 70th anniversary of the establishment of Nepal France bilateral relation.

The author is the French Ambassador to Nepal

Triumphed Over Annapurna And The French Expedition Team
Dec 16, 2020
French National Day Celebration
Jul 14, 2020
Nepal Is On A Global Map For Celebrating The Excellence In French Cuisine
Mar 07, 2019
Facing our times
Jan 31, 2019