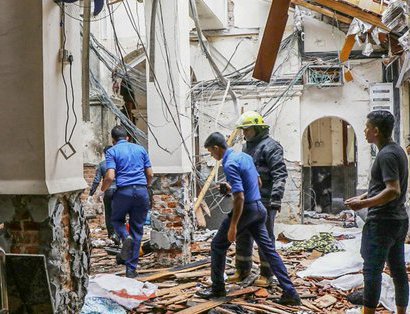 At least 500 wounded as South Asian nation reels from the attacks that targeted churches and hotels across the country.

A series of coordinated explosions has rocked churches and hotels in Sri Lanka killing almost 300 people on Easter Sunday in the South Asian island nation.

More than 500 people have been injured in the worst attack since the end of the civil war 10 years ago.

The blasts targeted four hotels, including the Shangri-La, Kingsbury and the Cinnamon Grand in the capital Colombo.

Nearly all victims were Sri Lankan. Dozens of foreigners were also killed. There were no claims of responsibility for the attacks.

A Sri Lankan government forensic analyst told AP news agency that six of the bombings on the churches and hotels on Sunday were carried out by seven suicide bombers.

The death toll from the Easter Sunday explosions in Sri Lanka has risen to 290 with almost 500 people wounded, a police spokesperson said on Monday.

The police added that the investigation into the bombings will examine reports that the intelligence community failed to detect or warn of possible suicide attacks before the violence.

Authorities also lifted a curfew that was in place overnight following the bombings. The streets in the capital, Colombo, were largely deserted on Monday morning, with most shops closed and a heavy deployment of soldiers and police.

More arrests made by the police

Police say they have now arrested at least 24 people in connection to Sunday's bombings. Police spokesperson Ruwan Gunasekara said that the individuals arrested, all locals, were being questioned by the Criminal Investigations Department.

An improvised pipe bomb discovered close to Colombo's main airport has been successfully defused, according to police.

The "homemade" pipe bomb was found late on Sunday on a road leading towards the main terminal, which remains open with heavy security after deadly attacks on churches and hotels.