Reiwa Era Will Be Successful In Developing Harmony Among Different Countries And Civilizations: Foreign Minister Gyawali

Reiwa Era Will Be Successful In Developing Harmony Among Different Countries And Civilizations: Foreign Minister Gyawali 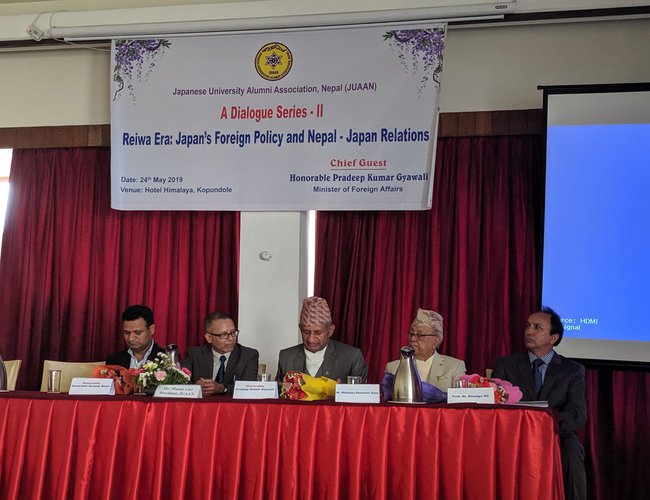 Minister for Foreign Affairs Pradeep Kumar Gyawali said that Nepal is happy to see that our friendly country Japan has entered a new era after the accession to the throne by His Majesty Emperor of Japan Naruhito in May 1, 2019.

Delivering a statement at a Symposium on Reiwa Era: Japan's Foreign Policy and Nepal-Japan Relations, Minister Gyawali said that there will be high-level representation from Nepal in the coronation ceremony of His Majesty the Emperor of Japan in October this year.

Organized by Japanese University Alumni Association, Nepal (JUAAN), minister Gyawali said that Nepal and Japan are traditional friends. Both countries have been enjoying cordial and friendly relations marked by mutual respect, trust, understanding and cooperation ever since the establishment of diplomatic relations in 1956. These relations have been further strengthened by the exchange of high-level visits at different times.

“My visit to Japan last year and the return visit of the Foreign Minister of Japan His Excellency Taro Kono within two months of my visit have helped further nurture our relationship,” said Minister Gyawali. “I am confident that the new Reiwa Era, that is interpreted as a beautiful harmony will be successful in developing harmony among different countries and civilizations. It will be successful in promoting commonalities that bind us together. “

“We are happy to note that Kulekhani Hydropower Project, Dhulikhel-Sindhuli-Bardibas Highway Project, TU Teaching Hospital, Nagdhunga Tunnel Construction Project, Improvement of Water Supply System in Pokhara, School Sector Reform Program, Human Resources Development (JDS) Scholarship are some of the major projects under cooperation of Japan. Government of Nepal highly appreciates Japan for its continued support and cooperation in the socio-economic development endeavours of Nepal. Japanese projects are highly appreciated for their quality and modern technology. We welcome the decision of the Government of Japan to enlist Nepal as a source country for inviting Nepali workers in the Japanese labour market. The signing of Memorandum of Cooperation on the specified skilled workers in March this year has added new dimension of bilateral cooperation in the labor field,” said Minister Gyawali.

“Tourism is another promising area where both countries have tremendous prospects for cooperation. Every year a significant number of Japanese tourists visit Nepal. In this connection, I am happy to share with you that Nepal Airlines Corporation is going to operate its direct flight between Kathmandu and Osaka sector from early July this year. We are also expecting direct flight of Nepal Airlines Corporation between the capital cities of the two countries,” said Miniter Gyawali.

“We appreciate Japan for its active role as an observer in the SAARC. The establishment of SAARC-Japan Special Fund (SJSF) has facilitated implementation of many activities since its inception in 1993. As the current Chair of the SAARC, we sincerely appreciate the Government of Japan for its assistance to SAARC members in various fields,” said Minister Gyawali.

“The world is in the state of flux. New developments are taking place with speed and pace not witnessed before. The change has both positive as well as negative prospects. Safe and secure future of the world depends on the proper management of change.” 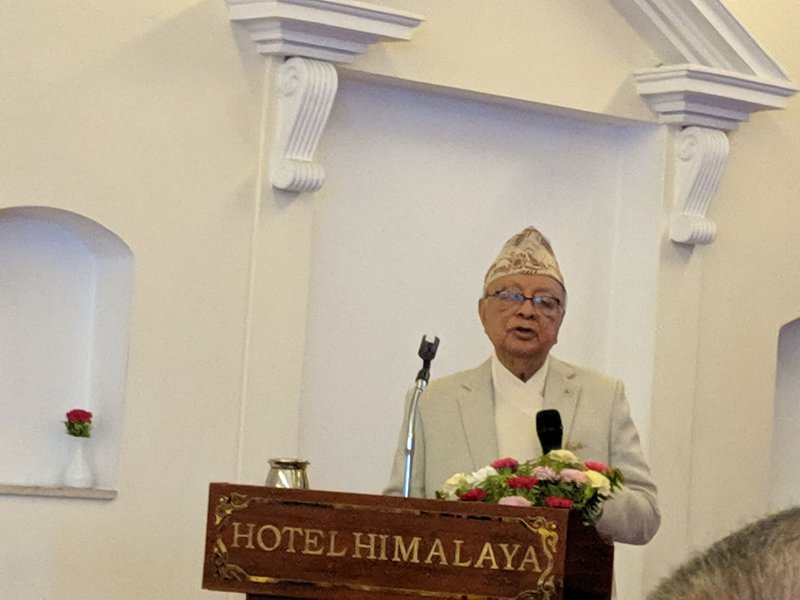 “It is known to all that geo-political weight of Asia is growing. Global balance of power is shifting to this part of the world. With the changes in global power structures, norms and values are also naturally redefined. Increasing competition for either maintaining or gaining supremacy is the fact of the day. “ 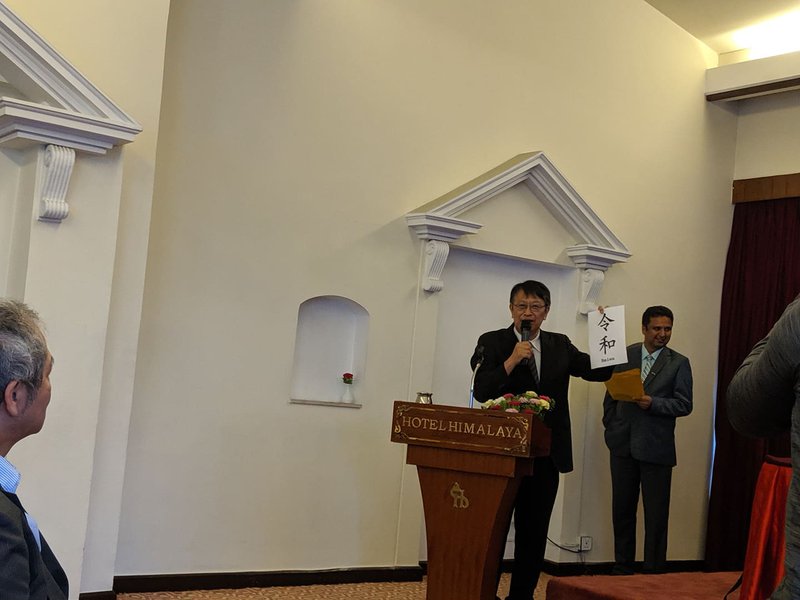 “We need a peaceful and harmonious world where all countries get opportunities to grow and prosper. We stand for a just, fair, inclusive and equitable world order founded on the principles of sovereign equality, mutual respect, non-interference and cooperation.”

“Japan’s rapid socio-economic development within a short span of time has been notable. It has the experience of growing out of the worst devastation caused by the rivalries among the powerful countries. It truly understands the value of peace and harmony.”

Ambassador to Japan to Nepal Masamichi Saigo said that Japan and Nepal are always maintain good relations and it will improve further in days to come. He said that Nepal is only country in South Asia which is enlisted recently to send people for employment. He said that there are currently 80,000 Nepalese in Japan.

Addressing the program former ambassador of Nepal to Japan Dr. Madan Kumar Bhattarai said that there are a lot of opportunities and possibilities for Nepalese students in Japan. He said that Japan’s beginning of new era following the accession to the throne by His Majesty Emperor of Japan Naruhito will bring peace and prosperity throughout the world.

“Since current Emperor of Japan Naruhito visited Nepal in 1987, he is well aware about Nepal and Nepalese people,” said Dr. Bhattarai. 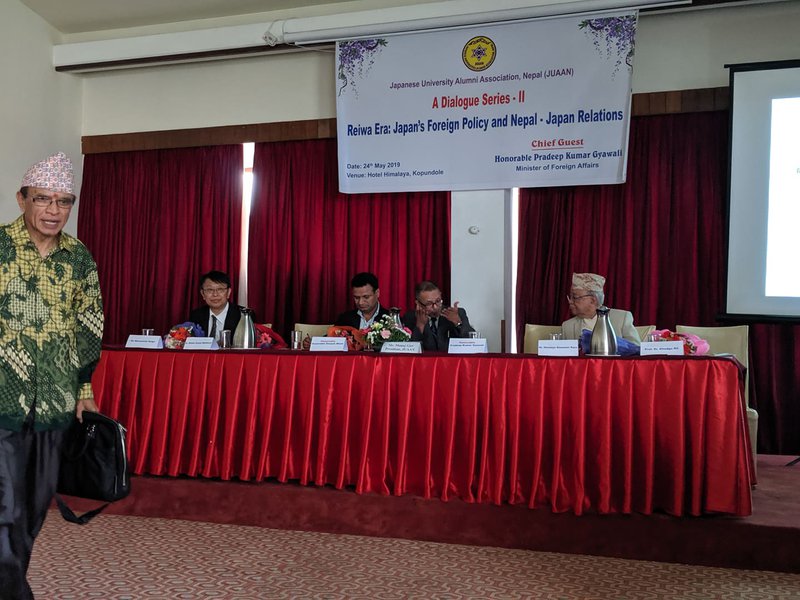 From ancient civilization to current, Professor Dr. K.C elaborated the different phases of Nepal –Japan relations. He also said that the present emperor has very much attachment with Nepal as he learnt the importance of water when he visited Nepal in 1987.

US , German And Chinese Ambassadors Wish On Dashain By NEW SPOTLIGHT ONLINE 6 hours, 38 minutes ago