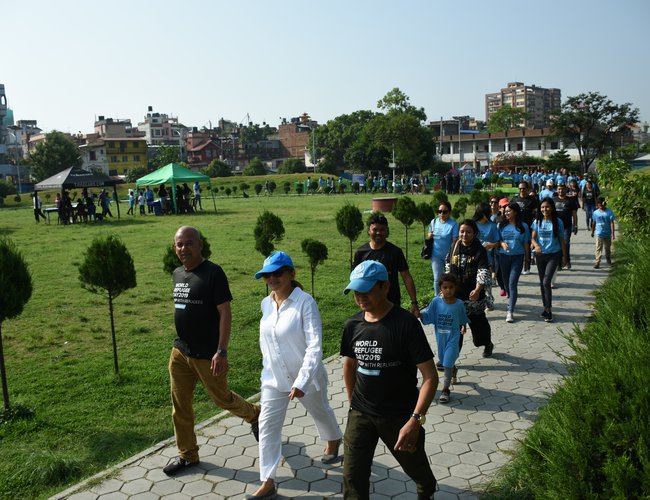 UNHCR Nepal, to celebrate and recognize, the strength and resilience of millions of families forced to flee their homes, and in recognition of the important role host communities play in Nepal in helping refugees to move toward self-reliance, organized a series of events from Friday 14th June to Thursday 20th June to mark World Refugee Day 2019.

A Solidarity Walk/ Run event was held in central Kathmandu on Saturday, June 15, to mark World Refugee Day 2019. Approximately 300 people, including Refugees, host communities, partner agencies and members of Nepali civil society organizations participated in solidarity walk to support and recognize UNHCR’s 2 Billion Kilometers to Safety campaign. Cultural performances by Refugees from Bhutan, whose travel to Kathmandu was organized by UNHCR, as well as students and musicians from the host community also took place, reflecting and celebrating the strong and important bonds between them.

On Friday 14th June and Saturday 15th June, Bhutanese Refugee women representing the Bhutanese Refugee Women Forum (BRWF) and the Bhutanese Refugee Association of the Disabled (BRAD), exhibited their handicrafts including Dhaka handloom products which they were able to successfully market in three locations in Kathmandu– the Australian Embassy, the UN House and the very popular weekend Farmer’s Market. The exhibitions focused on income-generation activities and promotion of self-reliance among Bhutanese Refugees, particularly women.

On Thursday 20th June Kathmandu’s iconic Durbar Square, a public promenade in the heart of the old city, was illuminated in ‘UNHCR blue’, to salute the courage and perseverance of millions of families forced to flee their homes and acknowledge the important role host communities in Nepal.

UN High Commissioner for Refugees Filippo Grandi said that World Refugee Day is an important occasion on which one joins forces with partners around the world, to draw attention to the plight of forcibly displaced and stateless people, and mobilize support and solidarity for the refugee cause.

“But as we mark World Refugee Day, it is important that we are able to go beyond the numbers, and help convey the brutal consequences of conflict, persecution and displacement, and the remarkable resilience of the people that find their way through these experiences, and rebuild their lives against the odds. Amidst the damaging and divisive narratives that often surround the refugee issue, it’s important that we make space for the human story to emerge, as well as offering practical, constructive ways for people, governments and institutions to help. Communications and advocacy, and creating space for the voices of refugees to be heard, are key aspects of UNHCR’s work, in which we all have a role to play,” said High Commissioner for Refugees Grandi. 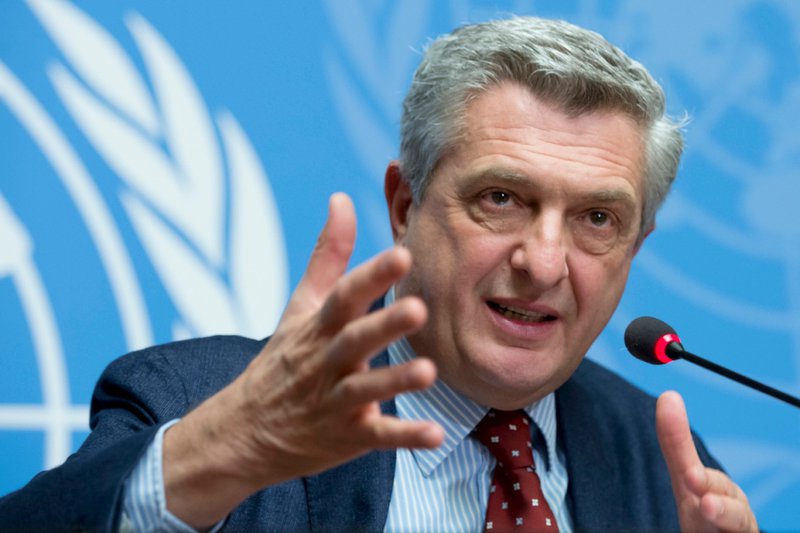 He further said that it’s also an important opportunity to welcome and celebrate the generosity and solidarity of host countries and communities around the world. “This year, I am marking World Refugee Day in Jordan, a country that has hosted hundreds of thousands of Syrians, Iraqis and other refugees under our responsibility over several decades, as well as a large Palestinian refugee population. Jordan hosts the second highest number of refugees per capita in the world, and has been at the forefront in developing innovative refugee responses and policies in support of social and economic inclusion – measures that have helped inspire and inform the Global Compact on Refugees,” he said.

“Earlier this week, I was in Germany – now hosting the fifth largest number of refugees in the world, and an international leader on refugee matters. Germany continues to provide a global example of principled and humane refugee policies and innovative approaches to social and economic inclusion, and provides sustained and substantial financial and political support for refugee operations around the world, as well as targeted development engagement,” said High Commissioner for Refugees Grandi

Nepal Airlines To Transport All Vaccines Within This Week From China By Agencies 6 days, 6 hours ago

India Hands Over 150 ICU Beds To Nepal As Part Of COVID-19 Cooperation By NEW SPOTLIGHT ONLINE 1 week, 2 days ago

Relaxation For The Entry Of Long Route Buses In Kathmandu Valley By Agencies 1 week, 6 days ago

PM Deuba Received A Telephone Call from US Secretary Of State By NEW SPOTLIGHT ONLINE Jul 27, 2021