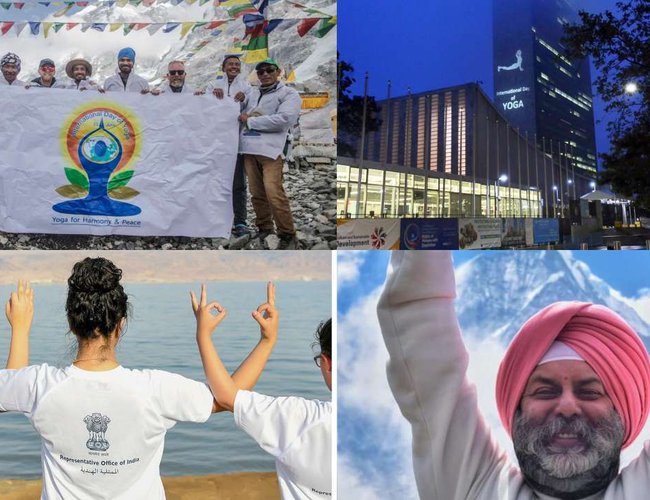 "I thank people across the world for joining the International Day of Yoga celebrations. World over, the first rays of the Sun are being welcomed by dedicated Yoga practitioners, it's a beautiful sight. I urge you all to embrace Yoga and make it an integral part of your daily routine," he added.

The Indian mission in Nepal organized a Yoga day Event at Nepal’s Namche Bazaar-gateway of Mount Everest, the highest peak in the world. Ambassador of India to Nepal Manjeev Singh Puri attended the yoga at the top of the world.

The fifth International Yoga Day is being celebrated across the world from the base camp of Mount Everest to Washington monument, from Effiel tower in Paris to Wuhan China with full force and enthusiasm. For the first time, Yoga was celebrated at the Base Camp of Mount Everest, 17600 feet above the sea level. India's Bharat Sharma and other mountaineers performed Yoga in the backdrop of mighty Mount Everest. The Indian mission in Nepal organized a Yoga day Event at Nepal’s Namche Bazaar-gateway of Mount Everest, the highest peak in the world.

The event is also being celebrated in Pakistan, particularly in Lahore. One could see guided yoga sessions in gyms and parks. Indian High commissioner to Islamabad, Ajay Bisaria had said, "The High Commission of India in Islamabad will celebrate the event this time on June 22, on its premises, where diplomats, HC staff and Pakistani yoga enthusiasts are expected to join in. We will have a guided yoga and meditation session at 7 am, followed by breakfast. Our theme: yoga for health, wellbeing and peace!"

At the United Nations, Indian envoy Syed Akbaruddin and Deputy Nagaraj Naidu lead the charge. At the United Nations, Yoga was celebrated with the theme Yoga for climate change and celebrated with gusto at the UNGA. Syed Akbaruddin said, "The UN has a special place in the remarkable growth of Yoga in our lifetimes. It was here that an ancient practice was transformed into an annual global observance. Hence we always observe the occasion with zest and fervour at the UN."

In Nordic countries like Finland and Denmark too, yoga is being adopted fast and the day saw many people turning up. Indian envoy to Denmark, Ajit Gupte said, "International Yoga Day was celebrated with enthusiasm in three cities--Copenhagen, Aarhus and Vejle. The events organised by the Embassy of India in Copenhagen with six local Yoga institutes attracted growing participation."

The Indian envoy to Finland, Vani Rao, said, "In Finland and Estonia, where yoga is very popular, local yoga practitioners and yoga schools participated with enthusiasm, in spite of an important local holiday week for 'mid-summer' celebration."

The United Nations proclaimed June 21 as the International Yoga Day on December 11, 2014, and the resolution proposed by India was co-sponsored by a record 175 countries.

The 5th international yoga day is being celebrated with across the world from the base camp of Mount Everest to Washington monument, from Effiel tower in Paris to Wuhan China with full force and enthusiasm.

On the occasion of International Yoga Day, Prime Minister Narendra Modi on Friday urged the world to embrace Yoga and to make it an integral part of one's daily routine, asserting that the focus must be on wellness as well as protection from illness. 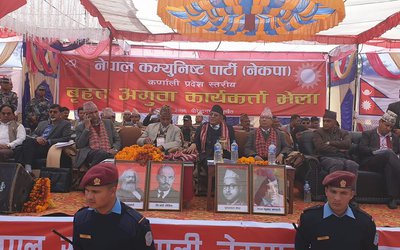 MCC Will Be Passed In National's Interests: Co-chair Prachanda By NEW SPOTLIGHT ONLINE 20 hours, 21 minutes ago