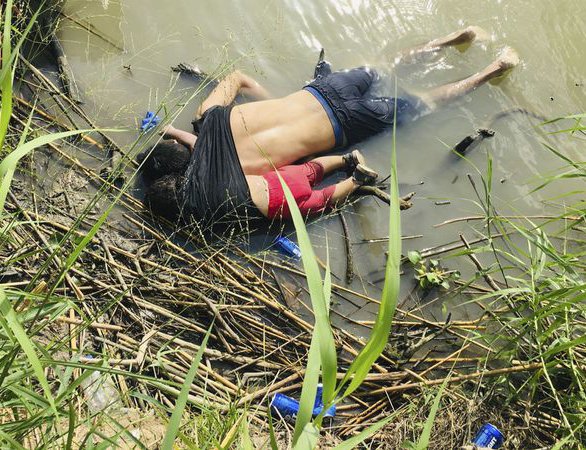 Sometimes an image is so powerful, it cuts through almost any noise.

That has happened with a graphic photograph of a dead man and child taken this week along the U.S.-Mexico border by journalist Julia Le Duc.

The photo, which was originally published Monday by the Mexican newspaper La Jornada and went viral on social media, shows a migrant and his less than 2-year-old daughter lying face down in the murky waters on the Mexican side of the Rio Grande. The girl’s right arm rests across the back of her father’s neck.

The image encapsulated the grim reality of the border amid the growing desperation of migrants fleeing poverty and crime in Central America and elsewhere who are willing to face great dangers — at times with children — for a shot at a better life in the United States.

The man in the photo, 25-year-old Oscar Alberto Martinez Ramirez, left El Salvador on April 3 with his 21-year-old wife, Tania Vanessa Avalos, and their toddler, Valeria, according to accounts from relatives reported by several media outlets. The family fled to seek economic opportunity and safety, the relatives said.

The couple first requested asylum in southern Mexico, but later decided to try to reach the U.S. When they arrived at the U.S. border over the weekend, relatives said, they were told that they could not cross — because of the Trump administration’s policy of “metering,” which allows only a few dozen migrants to seek asylum at official crossings each day.

According to Le Duc's reporting for La Jornada, the family, frustrated, decided to swim across the river separating the U.S. and Mexico on Sunday and turn themselves in to border authorities.

Martinez swam across with Valeria first and set her down safely on the U.S. side. As he began to cross back for his wife, the girl panicked and threw herself into the river. Martinez tried to rescue his daughter and managed to grab her, but they drowned.

Their bodies were discovered Monday morning near Matamoros, Mexico, across from Brownsville, Texas, less than a mile from an international border bridge.

Hundreds of migrants die while seeking to reach the U.S. each year. They drown in the swift-running Rio Grande, perish in the sweltering Sonoran Desert or suffocate in the back of tractor-trailers driven by migrant smugglers. Most of those deaths go largely unnoticed in the United States.

But Le Duc’s photo went viral and was published on the front page of the New York Times on Wednesday, with some saying it points to increasingly inhumane U.S. immigration policies.

Since taking office in 2017, Trump has sought to make it more difficult for all immigrants, including those seeking political asylum, to reach the U.S. Along with metering and a short-lived policy that resulted in thousands of migrant children being separated from their families last year, his administration has in the first six months of this year sent more than 17,000 asylum seekers to Mexico to wait for their cases to be heard.

Several Democratic presidential candidates expressed outrage at the image, with California Sen. Kamala Harris tweeting that it was “a stain on our moral conscience” and former Rep. Beto O’Rourke of Texas tweeting, “Trump is responsible for these deaths.”

In Mexico, where polls show that attitudes toward migrants have toughened in recent months, President Andres Manuel Lopez Obrador said at his morning news conference Tuesday that the deaths were “very regrettable.”

As the photograph generated more attention, some observers debated the appropriateness of publishing such a graphic image.

In a statement, the National Assn. of Hispanic Journalists said it was “disturbed and concerned” by a decision by the Associated Press to publish the photo via a tweet.

“Men, women, and children cross the border daily often escaping terror with hopes of a better life, knowing the peril that awaits them as they attempt to make the long. journey to America,” the statement said. Using the picture “seeks to take advantage of a sensational situation,” it said.

Mario Carrillo, Texas director of the immigrant activist group America’s Voice, said via Twitter that the use of the photo was too much for him.

“I’ve been so torn about the benefit of using the image,” Carrillo said. “Do we need to see the photo to understand how awful it is? I don't think so.”

The practice of publishing graphic photos of dead people — particularly those not from the U.S. — has provoked backlash in the past. After the New York Times ran photographs of victims of a terrorist attack in Nairobi, Kenya, in January, for example, some critics said the newspaper and other U.S. news outlets wouldn’t publish such graphic photos after an attack in the United States or elsewhere in the West.

For many people, the picture of the deceased father and daughter called to mind a photograph taken in 2015 of the lifeless body of a 3-year-old Syrian refugee lying face down on the beach. The boy, Aylan Kurdi, died in the Mediterranean Sea after the boat carrying him and his family to Greece capsized.

The photo helped draw considerable attention to the humanitarian crisis in Syria and the struggle of refugees seeking to reach Europe. It also sparked record donations to aid groups working on those issues, according to a study that examined the long-term impact of the photo. But those donations quickly fell off.

“The iconic image of a young Syrian child, lying face down on a beach, woke the world for a brief time, bringing much-needed attention to the war and the plight of its many victims,” the study said. “But this empathic response was short-lived.”

China And The U.S. Are Edging Toward A New Cold War: Kissinger By Agencies 6 days, 18 hours ago

The Pre-Trump World Won't Come Back By Agencies 2 weeks, 1 day ago

US Formally Withdraws From Paris Agreement By Agencies 2 weeks, 5 days ago

We Were Beating China At A Level They Haven't Been Beaten Before: Trump By Agencies 3 weeks, 2 days ago

China Registered 4.9 Percent Growth In The Third Quatar By Agencies 1 month ago