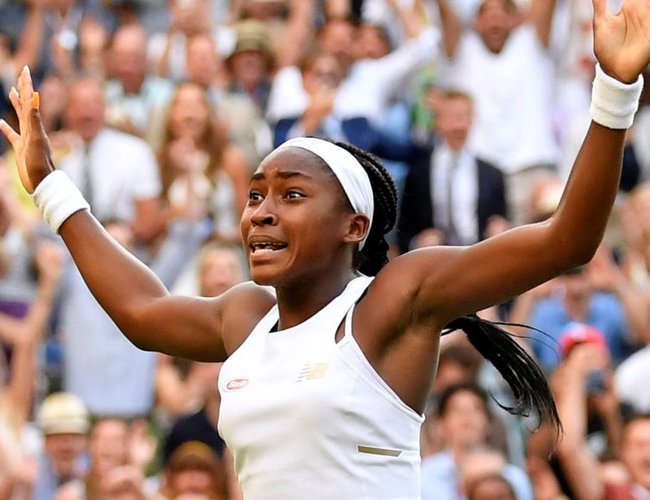 After double-faulting to hand Hercog the first set, Gauff was staring at defeat at 5-2 in the second.

But she pulled back to force a tie-break and snatched another famous win.

"I always knew I could come back whatever the score was," Gauff, who will face Romanian former world number one Simona Halep next, told BBC television.

"The crowd was amazing. Even when I was down match point they were still cheering me on."

From the moment she arrived in London, Gauff has been doing things her way - and in style.

After stunning one of her idols Williams 6-4 6-4 in the first round, and then proving it was no fluke with another straight-set win over former Wimbledon semi-finalist Magdalena Rybarikova, Gauff became the story of the championships.

Such was the interest in her that this third-round match - which on paper was a qualifier against an unseeded player - ended up on Centre Court, one of the sport's biggest stages.

Trailing by a double break in the second set, Gauff was heading for the exit door. Facing two match points, she had one foot out of it.

But if there was any doubt over the mental strength of this youngster, she answered it - saving one match point with a bold, line-kissing winner, before Hercog double-faulted on the other.

She must have sensed it was going to be her day when a lucky net cord in the tie-break edged her ahead - and she held her nerve in a who-will-blink-first rally on set point, then unleashed the forehand winner that drew her level.

Gauff beat her chest in celebration, her mum dared to look up, and the Centre Court crowd rose to their feet with a roar.

Only eligible to play 10 tournaments at professional level between her 15th and 16th birthdays, Gauff seems to have chosen wisely. Even if she loses to 2018 French Open champion Halep in the next round on Monday, the teenager will take home prize money of £176,000.

"I can't buy a car because I can't drive," she said. "Maybe I'm going to buy some hoodies."

Her Wimbledon run so far will lift Gauff into the world's top 200, up from 313 at the start of the tournament.

If she can negotiate her way past potential opponents, such as third seed Karolina Pliskova, 23-time Grand Slam champion Serena Williams or world number one Ashleigh Barty, she would rise even higher.

And, whisper it quietly at this stage, no 15-year-old has ever won a Grand Slam singles title. On this showing, it is not something that would faze this one.