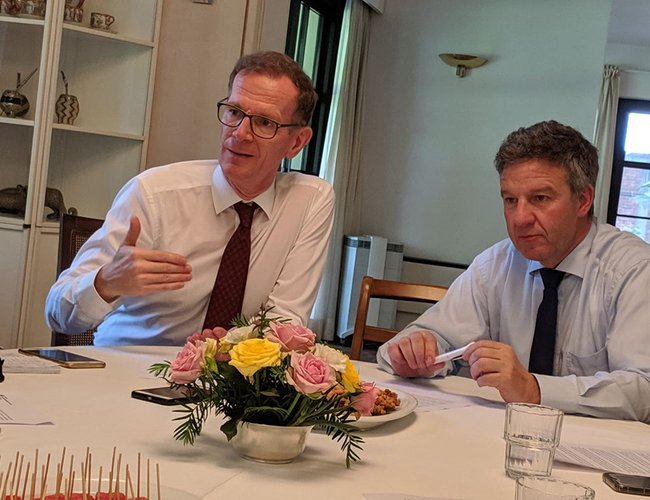 Markus Potzel, Commissioner for South Asia in the German Federal Foreign Office, said that Germany has been partner for Nepal's development in the last sixty years and continue its partnership with Nepal in coming days.

He said that his meeting with ministers and other high level Nepali government officials, business communities and civil society organizations was very fruitful. He said the possibility of German private sector investments in various areas of Nepal.

Ambassador Germany to Nepal Roland Schäfer said that the visit is first of its kind and highly important to strengthen the bilateral relations between the two countries.

Markus Potzel, Commissioner for South Asia, was on a two-day visit to Nepal from 16 to 17 July 2019. According to a press release issued by Embassy of Federal Republic of Germany, This visit aims at upgrading political relations between Germany and Nepal, based on the long-standing bilateral friendship and cooperation that has lasted for more than 60 years.

On 16 July, Shankar Das Bairagi, Foreign Secretary, Ministry of Foreign Affairs welcomed Markus Potzel to the first joint political consultations between the two Foreign Ministries. Shankar Das Bairagi also recalled his visit to Berlin in summer 2018, where he was received by Vice Minister Niels Annen in the German Foreign Office.

The two sides signed the Joint Declaration of Intent on the Establishment of Bilateral Consultation Mechanism, which stipulates that these consultations would be held annually, at mutually convenient times in the future. They will be complementary to the bi-annual consultations on development cooperation, led by the Nepali Ministry of Finance and the German Ministry for Economic Cooperation and Development.

The excellent state of bilateral relations was underlined by a number of recent decisions on joint projects.

The two sides welcomed the signing of a 24.3 Million Euro financial agreement on Friday 5th July, which will serve to upgrade maternal care facilities in the Kathmandu Valley, the provision of solar energy to remote areas, as well as the establishment of specific credit lines to kick-start start-up businesses in semi-urban and rural areas.

Germany also pledged additional 4 million Euro for technical cooperation to further upgrade the use of solar energy in order to tackle the challenges of Climate change and energy security in Nepal.

The two sides welcomed the imminent conclusion of an agreement which will allow diplomats’ spouses to take on gainful employment in the host country while the family is posted there.

The two sides also welcomed the good prospects for an upcoming cooperation between the University of Hamburg (Germany), and two institutions in Nepal on the preservation of the oldest surviving Sanskrit Manuscripts worldwide.

The two sides stressed the need for intensifying trade and foreign direct investment linkages, and they welcomed efforts to promote the German private sector’s interest in investments in Nepal. The German side welcomed efforts to foster an open investment climate in Nepal and pledged support in ongoing reform measures. Both sides underlined the need to speed up Government decisions on concrete economic engagements and contracts.

Germany pledged support to promote tourism, in the context of the Visit Nepal 2020 tourism campaign, but also in the longer term.

With regard to both countries’ membership in the UN Human Rights Council, the German side showed appreciation for the Nepali side’s progress made in guaranteeing basic rights, based on the 2015 constitution. The German side also appreciated Nepal’s unique and home-grown peace process and expressed hope that its remaining aspects would be resolved soon. 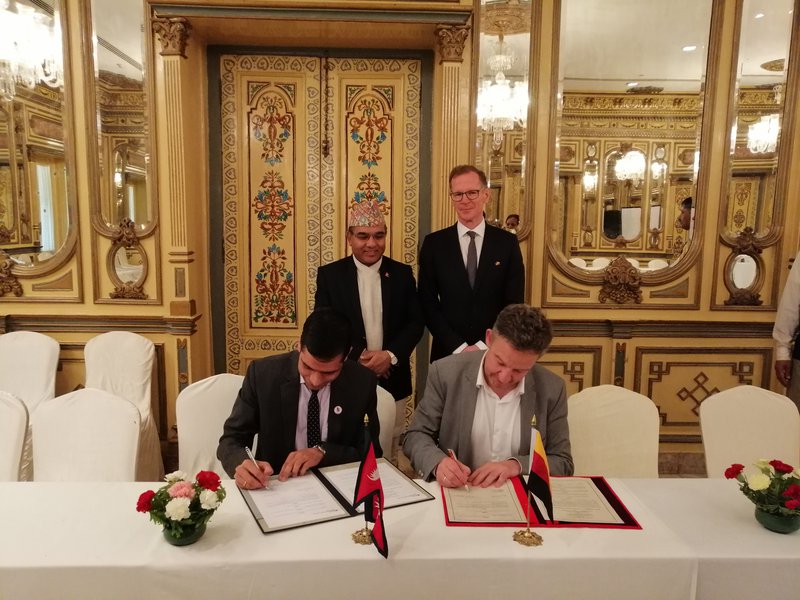 "The two sides underlined the significance of exchanging high-level visits in further cementing friendly ties and promoting collaborative partnerships in mutually beneficial areas. The two sides were also looking forward to the visit of Vice Minister Norbert Barthle, German Ministry of Economic Cooperation and Development, to Kathmandu in October, and an upcoming bilateral business forum," said a press release.

GBIA Will Be A Game Changer: Dhakal
May 20, 2022
Balen Shah And Sunita Danglo Continue To Lead In Mayor And Deputy Mayor Of Kathmandu Metropolitan City
May 20, 2022
Weather Forecast: Moderate Rain Is Likely To Occur At Bagmati Province and Gandaki Province
May 20, 2022
Sri Lanka’s Role In Getting Recognition For Vesak Day Highlighted
May 19, 2022
U.S. Delivers Disaster Relief system To Nepal
May 19, 2022

Balen Shah Leading The Race with Over 4500 Votes By NEW SPOTLIGHT ONLINE 3 days, 8 hours ago