India Is Not A Big Brother Of Nepal: Former Prime Minister Nepal

India Is Not A Big Brother Of Nepal: Former Prime Minister Nepal 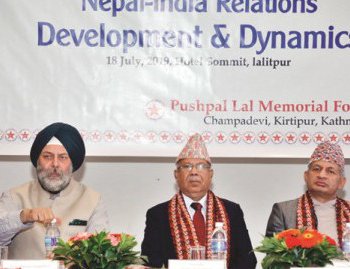 Minister for Foreign Affairs Praeep Kumar Gyawali said that the bilateral relationship continued to grow in the subsequent times, reaching the present stage. This active relationship in continuity speaks volumes of engagements, friendship and cooperation between our two countries.

Addressing a talk program Nepal-India relations Development and dynamics organized by Pushpalal Memorial Foundation, Minister Gyawali said that our two countries is time immemorial. History tells us that even before the modern nations of Nepal and India came into existence, small kingdoms and princely states existing in the present territories of Nepal and India had developed flourishing relationship, both at the level of the government and the people. The bilateral relationship continued to grow in the subsequent times, reaching the present stage. This active relationship in continuity speaks volumes of engagements, friendship and cooperation between our two countries.

He said that the closeness of the relationship between Nepal and India is based on the robust foundation of geographical proximity, civilization and cultural bonds, friendship between the two peoples, and similar perceptions on many global and regional issues including shared values.

"Nepal and India are two independent and sovereign countries; they are immediate neighbors, sharing a long stretch of boundary; and they exist side by side and interact much more densely in every sphere of life. When we realize this fact, we become further closer. And, it also automatically demands from us more efforts to take the relationship to a new height," said minister Gyawali.

"It is with this spirit that the two countries have maintained friendly and cooperative relationship at the highest political level. High level visits at increased frequency have helped not only strengthen friendship but also fructify the relationship in areas of mutual interest. In this context, I would like to fondly recall the visits of both prime ministers and four round of talks last year, which have contributed significantly to further cementing the bilateral ties and to explore the new vistas of cooperation. The growth of the relationship has produced tangible outcomes in many sectors, such as trade, transit, investment, tourism, culture, education, development cooperation and so on. Besides, continuous dialogues, exchange of ideas, and agreements, including through dozens of bilateral mechanisms, have substantially contributed to add dynamism to the relationship."

Ambassador of India to Nepal Manjeev Singh Puri said that India-Nepal relations have already passed long time saying the relations started from construciton of Tribhuwan Rajpath. He said that India has been providing support Nepal to make her devleoped and prosperous.

Excerpts of the Statement of Minister Gyawali

It is a matter of satisfaction that Nepal-India relations have been growing in multi-dimensional ways, creating myriads of opportunities. However, this does not mean that the relations are bereft of problems and issues. They are there; and it is not unnatural for any friendly neighboring countries with wide gamut of relations and dense interaction. What we need to do is to continue removing obstacles, resolving issues and moving forward towards extracting the benefits from enhanced bilateral cooperation.

And what gives us enormous satisfaction is that we have clear vision, sufficient commitment and required capability in both sides to address those issues.

Another important aspect in our relationship is that we have to understand the sensitivities of each other. If there is a trust that sensitivities are well taken care of, it will help grow the relationship smoothly. We need to continue strengthening cooperation for controlling the cross-border criminal and unwanted activities, which harm both countries. Similarly, we must prevent unscrupulous elements from using the soil of one country against another. Furthermore, a practical solution is also to be worked out for reducing Nepal's huge trade deficit with India, as the huge imbalance in trade shows a negative picture. 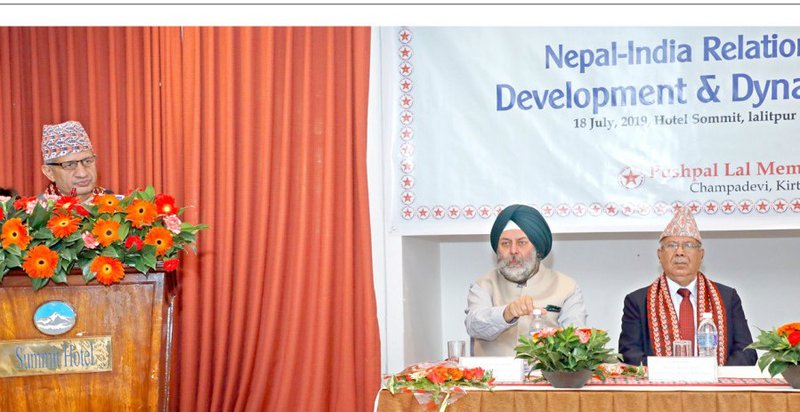 Given India's huge population, big size of economy, industrial capacity and technological progress, it has remained a major source of investment, import items, tourist inflows, technological support, and development cooperation to Nepal. India is on of the biggest source of foreign investment in Nepal in terms of amount. Among the source countries of tourists coming to Nepal, India is on top of all. Likewise, in Nepal's total imports and exports, India occupies a prominent position. On the part of Nepal too, investment, export of goods and tourists outflow into India are there, though in a smaller scale. These facts and figures vindicate the depth and dynamism of our relationship. Here, what we need to do is to create a win-win situation for both countries. We have to work out plans for ensuring it in a sustainable way.

The areas of cooperation in our two countries are so wide and all-encompassing that potentials exist in almost every sector. We are blessed with enormous natural resources; we have young and active population; our history, culture and civilization are rich. Additionally, people-to-people bonds are strong and dynamic. Interdependence and interconnectedness are intense. India's economy has already taken momentum, securing a respectable position in the global economy. It is an opportunity for Nepal to take the benefit from this economic growth. In Nepal too, economic growth rates have started going up, which can benefit India as well.

On of the critical issue to collaborate with, is the issue of climate change. Since the challenges of climate change has scaled up in unprecedented points, probably we should have to use the term climate crisis or urgency rather. As both countries are linked with similar climate system, ecology and Himalayan ranges, problem we face are almost identical. We can even talk the daily weather forecasts nowadays, the potential floods in Terai and adjoining parts of Northern India alarms millions of people everyday. It is a issue, which warrants us to work collaboratively, with sensitivity and urgency.

It is rare to have a highly favorable situation in both countries, which is available at present, as reflected in the stable governments enjoying the two-thirds majority in the parliaments, enormous faith of the peoples in the leaders, accelerating economic growth rates, clear visions for development and prosperity, and strong commitments for delivery of outcomes to the peoples. I see it as a golden opportunity for both Nepal and India. We must do everything possible to tap this opportunity.

On the one hand, we need to work on a new agenda for development and shared prosperity in the changed scenario; and, on the other hand, we have to complete the unfinished tasks, clearing ways for novel ventures. These twin tasks are to be performed simultaneously. Old treaties and agreements await review for making them appropriate in the present context. Completion of long-standing bilateral cooperation projects of great significance, such as Pancheswor and Hulaki Roads, require due priority. Similarly, resolution of the boundary issues and the permanent solution to the problems of inundation are other important works to be accomplished.

I am happy to share the facts that a number of flagship projects between Nepal and India have been carried out. Some of them have already been completed and some are in the phase of implementation. The petroleum pipeline project from Motihari to Amlekhgunj is almost ready for operation. The Integrated Check Post in Birgunj has already started functioning and the next one in Biratnagar is awaiting its operationalization. Likewise, some segments of Hulaki Roads have been completed. The process for Raxaul to Kathmandu Railway line has begun with preliminary survey. The works relating to Inland Waterways have also started. We are developing strong connectivity with India through railways and waterways. Cooperation in the field of agriculture is taking momentum. New air entry points have been finalized to pave the way to boost the Nepali aviation industry. I am sure it will phenomenally help enhance movement of goods and people with less cost and less time.

When we talk about our relations, we should also take into account global developments, as they do have implications on bilateral relations. The world today has seen unprecedented developments in geo-politics, geo-economics, technology, and inter-state relations. Nationalistic fervor, protectionist policies, apathy to multilateralism, and dissociation from global and regional compacts and commitments have unexpectedly changed the dynamics of cooperation among countries. In such a volatile situation, countries like ours have to forge strong cooperation in order to secure common interests from the international and regional engagements.

The Government of Nepal has dedicated its entire efforts towards realizing the national aspiration of "Prosperous Nepal, Happy Nepali". To help contribute to this drive, we count high the collaboration with India. We welcome increased amount of investment from India into Nepal in areas of our national priority, such as hydropower, transport infrastructure, tourism, agriculture, ICT, mines and minerals, education, health, manufacturing, etc.

These investments will benefit not only Nepal but also India. In the areas of trade, enhanced market access for Nepali products in India as well as trade facilitation are required for reducing the trade deficit of Nepal, making the trade beneficial for both countries. Similarly, as we are going to celebrate the year 2020 as the "Visit Nepal Year", we expect more tourists from India to Nepal in 2020 and beyond. From Nepal’s side too, a lot of Nepali people visit India every year as tourists. This is one of the important areas of cooperation between our two countries. As before, I am confident that Nepal will continue receiving increased amount of development cooperation from India. While saying so, I would like to thank the Government of India for continuously extending development cooperation to Nepal in the past as well as increasing the amount of such cooperation to Nepal in the budget announced recently.

After the historical political change, Nepal now is perfectly poised for development and prosperity. It is based on the facts on the ground. First, the country has political stability with a government enjoying two-thirds majority in the parliament. Second, with a new constitution as well as new and revised laws, legal base has taken strong roots. Third, good governance and reform in public service have received adequate priority. Fourth, revenue mobilization and financial discipline has created conducive environment in the economic and financial sector. Fifth, the Government of Nepal has given a tempo to development works. Sixth, a lot of incentives and facilities for foreign investors, industrialists and businesspersons are available in the country. Seventh, necessary infrastructure and facilities are being expanded for foreign tourists for their comfortable and enjoyable stay. Finally, the Government of Nepal is committed to strengthen ties with its immediate neighbors and other friendly countries around the world. I am confident that such a propitious environment will serve as a bedrock for the growth of our relations, accruing great advantages to both countries.

To end, I would like to say that there is every room for the expansion and deepening of Nepal-India relations in the days ahead. Both countries are replete with potentials. There is also the will and determination to realize these potentials for their development. With mutual understanding and trust at all levels, we can continue reaping the benefits of our friendship and cooperation.

Both the photo courtesy to Gorkhapatra Daily

International Community Call All Actors In Nepal To Respect Right Of The People By NEW SPOTLIGHT ONLINE 2 hours, 23 minutes ago

Secretary General Of SAARC Calls On President Of Nepal By NEW SPOTLIGHT ONLINE 6 hours, 34 minutes ago