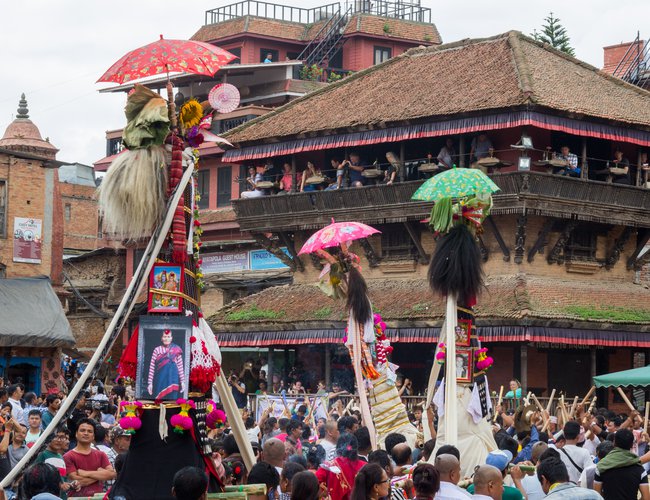 In Nepal it is said, “There are as many festivals as there are days in a year.” This is due to the high ethnic diversity of this country, which counts more than 120 different ethnic groups out of its 30 million inhabitants.

Famous French Historian Silvy Levy, the first visitor from France in the century, eighteenth described Nepal as a country of temples and festivals.

When I read a tweet of US Ambassador to Nepal Randy Berry, I found Nepal is still full of charm and festival. Ambassador Berry posts, "Although you don't need an occasion to celebrate amazing pictures in a naturally beautiful & culturally rich country like #Nepal, here are my two absolute favorite ones: Aerial view of Bouddha & Kartik Nach in Patan! Thank you, Punya! (Embassy colleague) #WorldPhotographyDay." 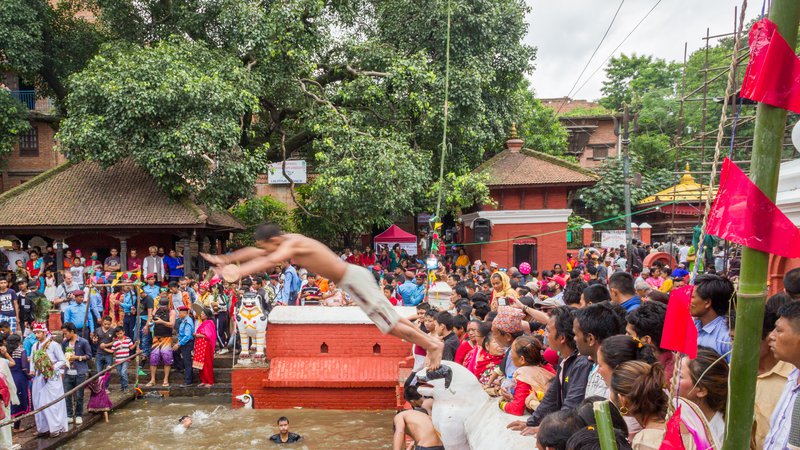 Like our French scholar Levy in eighteenth century and U.S. Ambassador now, my impression about Kathmandu Valley is no different. I cannot explain the diversity and beauty of the festival and mood of people in August of Kathmandu.

Nepalese festival dates follow the Nepalese calendar, which is a lunar calendar. As a result, festivals do not end up on the same day each year with respect to the Gregorian calendar (the internationally used calendar). This year, quite some festivals, principally Hindu ones, occurred during the month of August in Kathmandu and all around its valley. I was there to attend some of them and will share my impressions in this article. 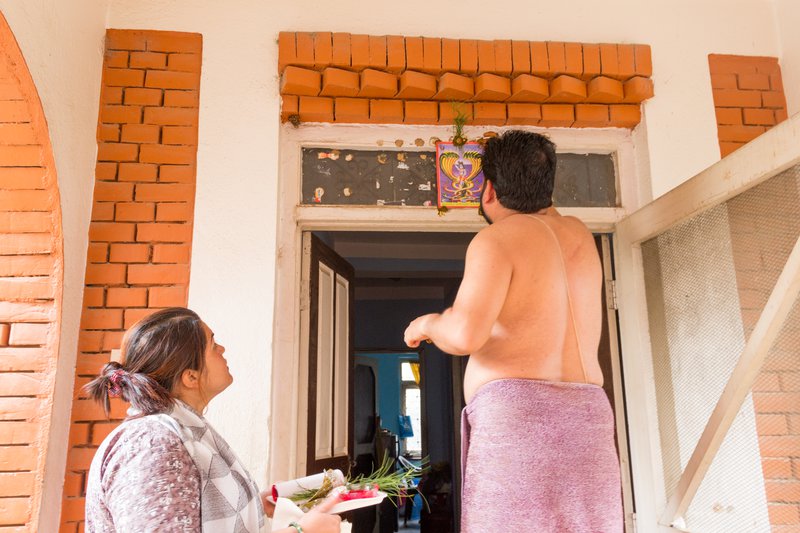 Naga Panchami, literally the Festival of Snakes, is the day where Hindu people worship snakes. In fact, a myth says that Kathmandu Valley used to be a lake, but when humans started to settle here, they drained it to build villages. Snakes, which were living around the lake, became angry. In order to calm them, humans gave the snakes some areas as pilgrimage destinations. After this, harmony was restored with nature. 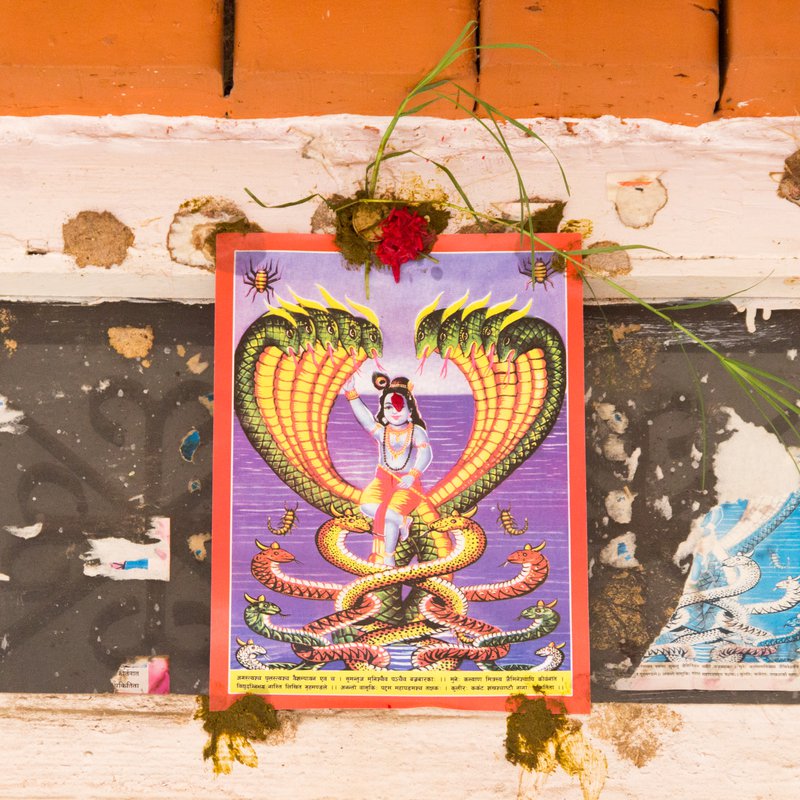 Nowadays, on the day of Naga Panchami, and usually in the morning, Nepalese fix a snake poster above the door of their home. It is believed to bring welfare to the family.

Moreover, people also gather around Naag Pokhari (i.e. snake pond) in Kathmandu to pray and celebrate this day together. To fix the poster, a glue made of cow dung is used. It is also common to add extra decoration on the poster as flowers, sacred grass, red pigment, or a coin. On the poster, colorful Hindu deities and several snakes are printed. 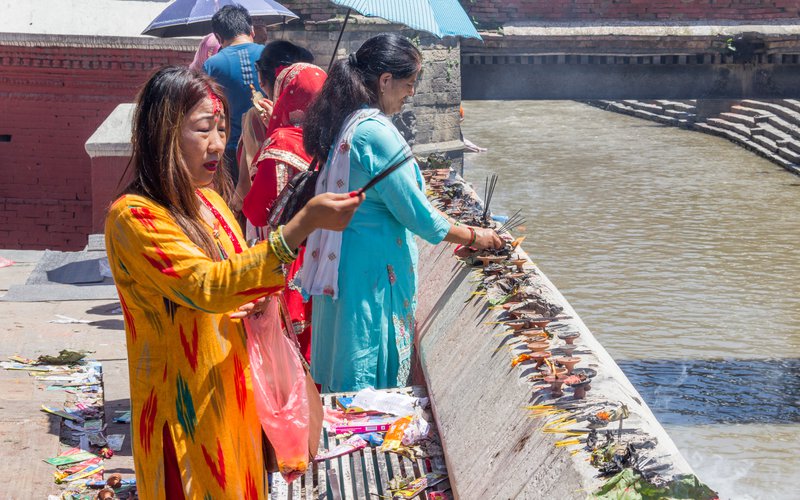 Shrawan is the name of a month in the Nepalese calendar, which roughly corresponds to July/August. This month is considered as particularly auspicious. That is why, during Shrawan month, people worship Shiva, one of the main deities of Hinduism, every Monday in Kathmandu’s Pashupatinath temple. 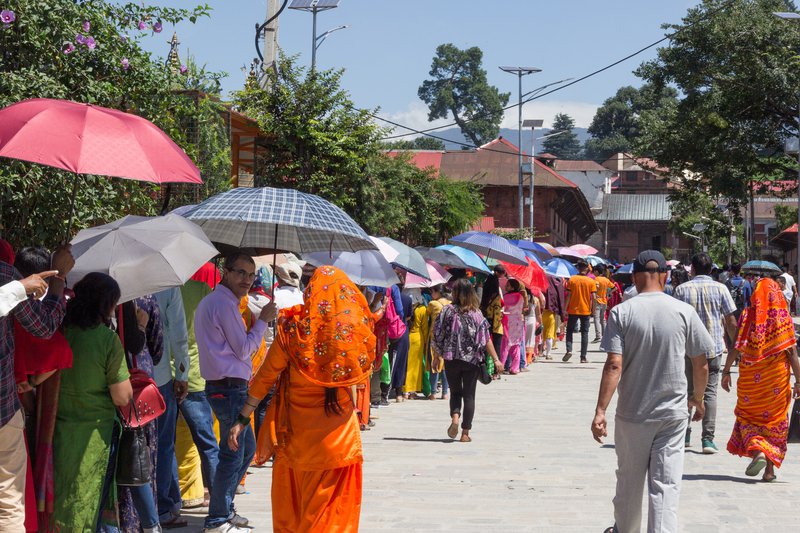 Men and women often come dressed in orange/yellow. They sometimes queue for hours to be able to enter the temple. As a tourist you are not allowed to enter the temple, but you can walk in the area around it. There, priests give sacred bracelets and Tikas (a mixture a red powder, yoghurt, and grains of rice, applied on the forehead) to the faithful in exchange for offerings.

This festival is very religious but the atmosphere is not stern at all. It actually gives a lively atmosphere to the temple. So do not hesitate to visit Pashupatinath temple on a Monday if you come to Kathmandu during this month. 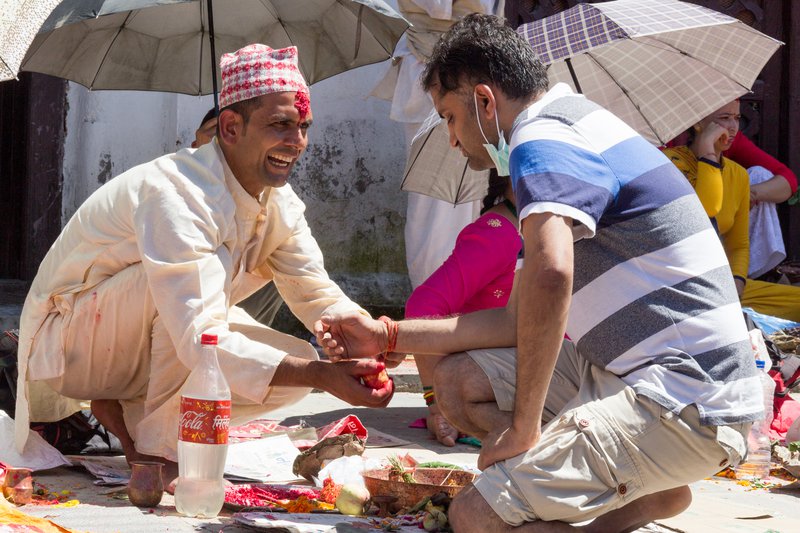 Janai Purnima is a big festival celebrated all over the country, and is also a public holiday. On this day families gather in temples and men perform ablution by dipping their body in water before renewing their sacred threads, called Janai that they wear around their chest.

In practice, boys and men go joyfully in ponds next to temples. Some young men do not hesitate to even jump in the ponds. Next to this, some men play the drum, which gives to this religious festival a party-like atmosphere.

Afterwards, a soup made of sprouted beans called Kwati is prepared and shared with everyone. 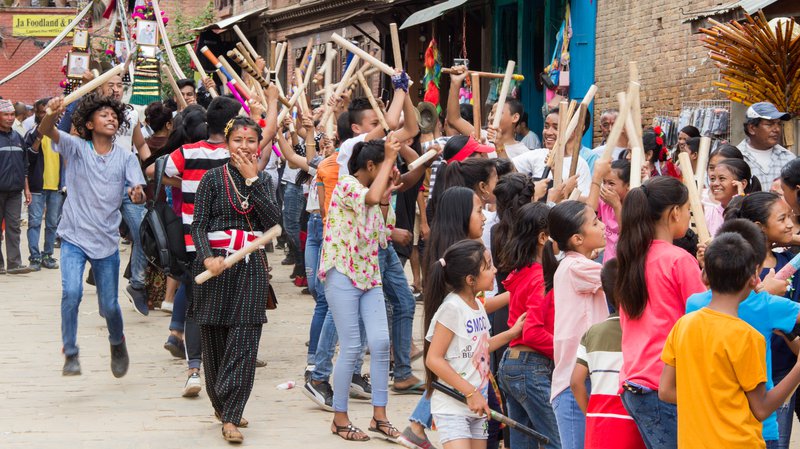 Gai Jatra, the festival of cows, is a happy festival where you can see people dancing, singing and laughing. It is celebrated all over Kathmandu Valley and is a public holiday in this region of Nepal.

The origin of this celebration lies in the legend of King Pratap Malla. When the king lost his son, the queen became very sad and no one and nothing could ease her grief. In a last attempt to console her, the king asked all families of his kingdom that lost a loved one to come and make a procession. Many people came, and this showed the queen that she was not alone in her sorrow.

Nowadays, families commemorate the death of relatives who passed away during the year by doing a big parade. Bhaktapur, a town located 15 kilometers away from Kathmandu, is known to be one of the best places to attend this festival. Therefore, this is where I went. 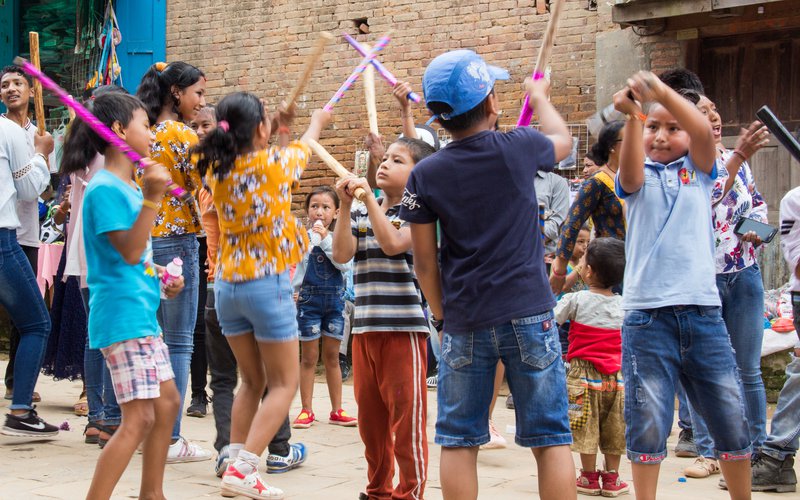 Around 11 am, families start to parade with their kind of floats that they built and decorated. On each of them, a picture of the deceased person is fixed. Families are carrying them through the streets in the company of brass bands and other musicians, as well as people, sometimes costumed, that are hitting each other’s wooden stick in rhythm. Overall, this festival is celebrated to ease the pain of families by sharing sorrow and enjoying a joyful time together.

Besides, young boys dressed up as cows can be seen during this day. In Hinduism, cow is a holy animal, and it is believed that it will help the deceased family members during their journey to heaven.

To conclude, I had a great time attending all these festivals. If coming to Nepal, do not forget to verify if one or two festivals fall during your stay here. It is a great chance to discover the Nepalese culture, in a different way than standard sightseeing. 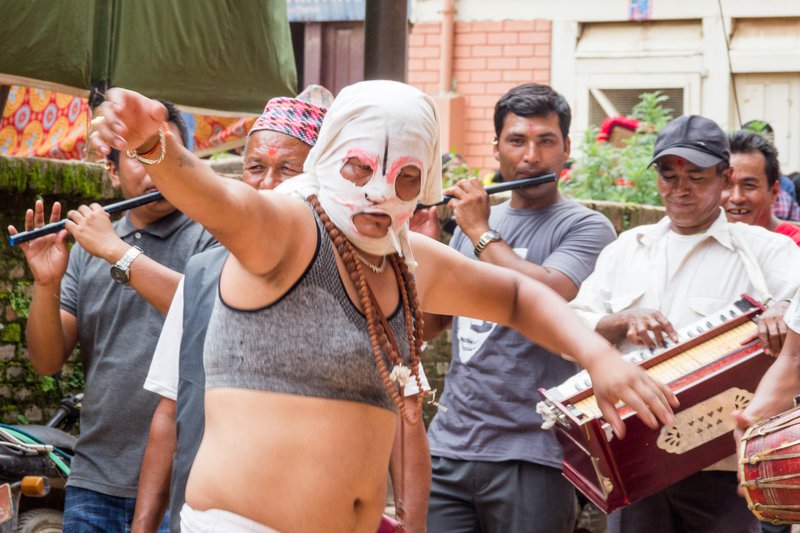 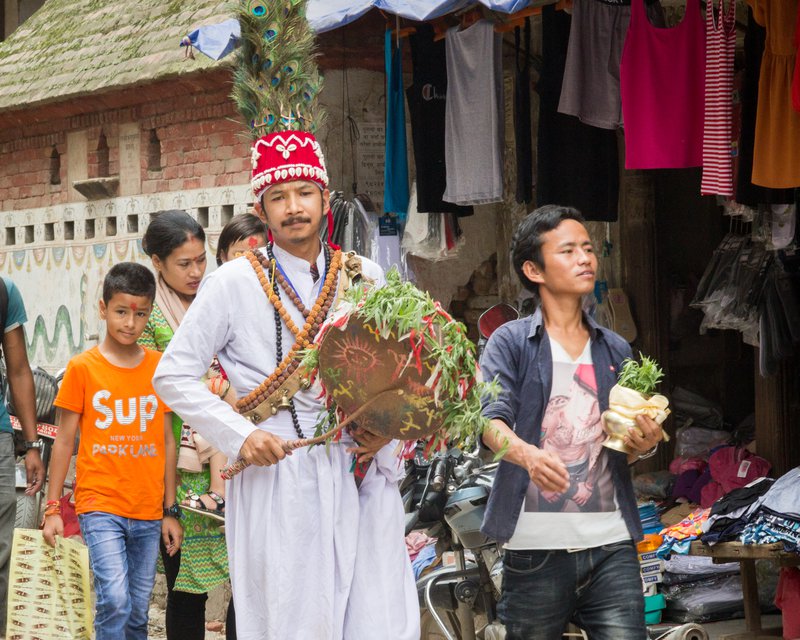 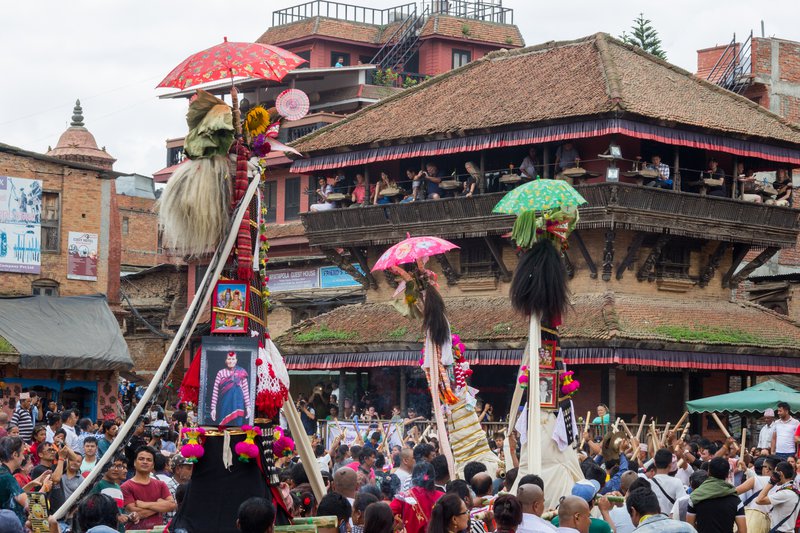 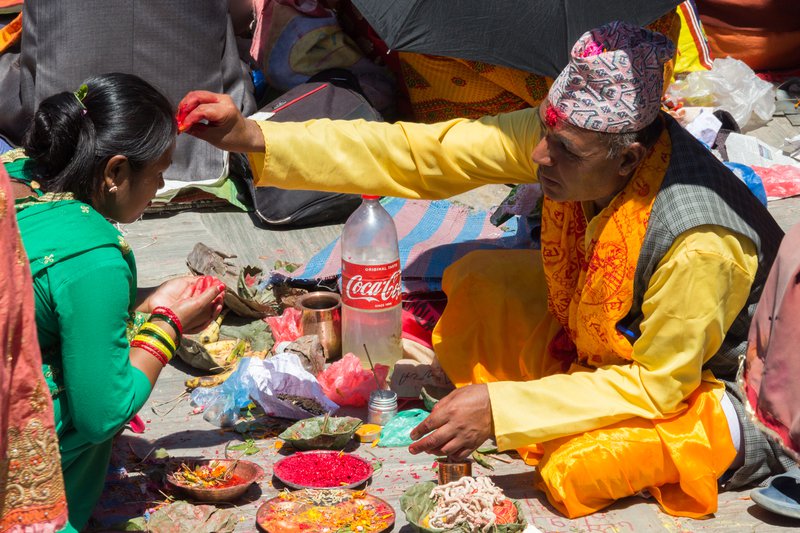 Aguiar is a visitor from France

She is from France

My First Impressions Of Kathmandu (With Photo Features)
Aug 09, 2019

Lunar Eclipse Of July 5 2020: What Time Is the 'Blood Moon Eclipse' In Nepal? By NEW SPOTLIGHT ONLINE 1 week ago

Heavy Rainfall Likely At One Or Two Places Of Province 1,2, Gandaki and 5 By NEW SPOTLIGHT ONLINE Jul 05, 2020