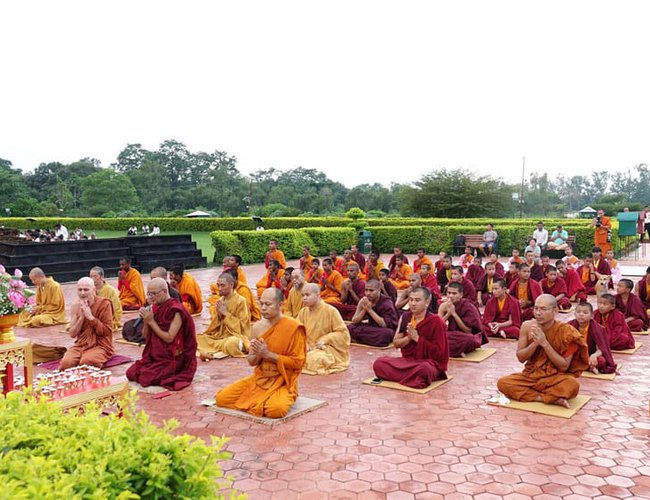 The Paritran is held to pray for an end to the sufferings of others. During the Paritran, which is held for an hour every day, sutras are recited. Pari means from outside and Tran means fear and sufferings emanating from various factors in life as from nature and man-made factors.

Prime Minister Oli is currently undergoing treatment of his kidney in Singapore. Acting member secretary of trust Saroj Bhattarai said that it was jointly organized by Lumbini Development Trust and Monastry’s of various countries based in Lumbini.

According to Wikipedia, Paritta (Pali), generally translated as "protection" or "safeguard," refers to the Buddhist practice of reciting certain verses and scriptures in order to ward off misfortune or danger, as well as to the specific verses and discourses recited as paritta texts. The practice of reciting or listening to the paritta suttas began very early in the history of Buddhism.

In the Pali literature, these short verses are recommended by the Buddha as providing protection from certain afflictions. The belief in the effective power to heal, or protect, of the sacca-kiriya, or asseveration of something quite true is an aspect of the work ascribed to the paritta.

It is also widely believed that all night recitations of paritta by monks bring safety, peace and well-being to a community. Such recitations will also occur on auspicious occasions, such as the inauguration of a new temple or home or to provide blessings upon those who hear. Conversely, paritta discourses are recited on inauspicious occasions as well, such as at a funeral or on the death anniversary of a loved one. They may also be recited to placate antagonistic spirits

Chanda Led Maoist And The Government To Hold Talks By NEW SPOTLIGHT ONLINE 5 hours, 59 minutes ago

Nepal Is Committed To End All Kinds Of Discrimination: Foreign Minister Gyawali By Agencies 6 days, 5 hours ago