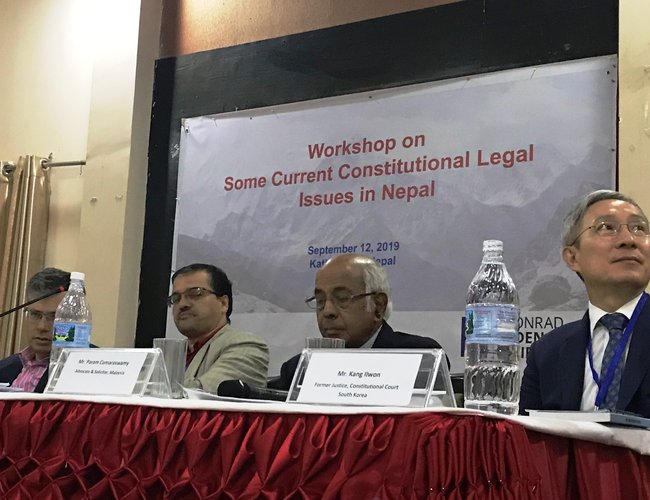 Senior legal experts of Nepal from both the judicial hierarchy and legal academia, young professionals and international experts discussed ways of reforming the existing system of Constitutional Bench at the Supreme Court of Nepal on September 12.

The discussion forum, entitled "Some Constitutional Legal Issues in Nepal," was organized together by the Office of the Attorney General (OAG), the Kathmandu University School of Law (KUSL), and the Konrad Adenauer Stiftung (KAS). Experts also explored the existing prosecutorial system in Nepal and its potential for further development. The two sessions of the workshop focused on two broad categories of constitutional legal challenges.

Senior constitutional expert Dr. Bipin Adhikari presented a paper on the background of the present system of the Constitutional Bench at the Supreme Court, the debate surrounding the constitutional court during the constitution making process, and the ongoing developments regarding the general provisions in the Constitution of Nepal for dispute resolution. He drew particular attention of the decision makers to how the Bench could be effectively developed further within the Supreme Court; drawing on from the features shared by most European countries' constitutional courts and emphasized the enhancement of Nepal's existing capacity to support ongoing federalization.

Building on Adhikari's paper, Sanjeeb Raj Regmi, Joint Attorney at the OAG, highlighted some of the challenges facing the Constitutional Bench, including an overload of cases, lack of expertise and knowledge, and delay in the disposition of the cases, and suggested that perhaps relaying jurisdiction to other entities, like the high court in appropriate cases, could offset some of these challenges. Former Justice of the Constitutional Court of South Korea, Ilwon Kang highlighted the history of the Constitutional Bench of South Korea and how gaining the trust of the public has been instrumental in its success, stance, and legitimacy in the country. He also emphasized the importance of persuasion, cooperation, and public confidence in the operations of the South Korean Constitutional Court.

The discussion on the evolving prosecution system in Nepal was also as lively. Judge Kiran Poudel of the High Court of Patan spoke about the arrangement for criminal prosecution in Nepal’s federal system. He noted the need for clarity regarding the jurisdiction and shared power over criminal prosecution between the federal and provincial governments. He also spoke about the concurrent powers of these two levels, as criminal law and public prosecutors (i.e. government attorneys) fall under federal jurisdiction, while the chief attorney and provincial police fall under provincial.

Rewati Raj Tripathi, Joint Attorney General at the OAG, highlighted the challenges of the prosecution system in Nepal from a federal perspective. His presentation focused on the various challenges faced by the prosecution system, including the issue of coordination, accountability and ownership of cases in the police-prosecutor relationship and compliance with the procedures of the investigation process, including ensuring legality of data collection, testimonies, and scientific examination.

Param Cumaraswamy, Advocate and Solicitor in Malaysia and a former United Nations Special Rapporteur on the Independence of Judges and Lawyers, raised two important issues regarding conflicts of interest. First, he spoke about the recent removal of the Attorney General (AG) by the Prime Minister (PM) of Malaysia, who appoints him/her, shortly after the AG charged the PM with corruption. Second, he also spoke about the current debates about the dual role of the AG in prosecuting cases as well as serving as the legal advisor to the government. He also offered Malaysian experience to the Nepalese scholars.

The workshop featured lively discussions toward the end of each session, where the audience raised various questions regarding, for example, inclusion of the high court in dispute resolution, the role of the National Human Rights Commission in bringing cases to the OAG for prosecution, and the procedure of filling charge sheets.

The introductory session was opened by Elsner and included remarks from Dr. Rishikesh Wagle, Dean of the Kathmandu University School of Law, Narayan Prasad Poudel, Deputy Attorney General of the OAG, and Justice Top Bahadur Magar, the Executive Director of Nepal's National Judicial Academy. The session ended with remarks from Gisela Elsner, Director of the Rule of Law Programme (Asia) of KAS, who spoke about the value of the discussions in realizing the goals of a federal Nepal, as well as Regmi and Judge Tek Prasad Dhungana.

According to Dean Dr Wagle and Joint Attorney Shyam Kumar Bhattarai, the workshop was immensely helpful and had offered important food for thought for policy makers.