With Xi’s Visit, The Spring Of China-Nepal Ties Has Arrived

Certain countries may be accustomed to their old habit of infiltrating other states, acting subversively against governments, and being behind color revolutions, 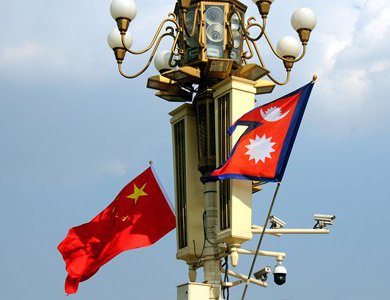 At the invitation of Nepalese President Bidya Devi Bhandari, Chinese President Xi Jinping is to pay a state visit to Nepal on October 12 and 13. As the first visit by a Chinese state leader to Nepal in 23 years, it will mark a major breakthrough in bilateral relations.

Since China and Nepal in May 2017 signed a memorandum of understanding on bilateral cooperation under the framework of the China-proposed Belt and Road Initiative, the two neighbors have joined hands to develop a Trans-Himalayan Multi-Dimensional Connectivity Network as well as a cross-border Special Economic Zone, and enhance cooperation on trade, investment, production capacity, railways, highways, ports, aviation, energy and people-to-people exchange, which has promoted Nepal to transform from a land-locked to a land-connected country.

Xi's visit, though a short one, will further propel the Trans-Himalayan Multi-Dimensional Connectivity Network between China and Nepal, cement mutually beneficial bonds, and upgrade the existing China-Nepal comprehensive cooperative partnership with ever-lasting friendship. In a nutshell, it will breathe new life into bilateral relations.

With China-Nepal cooperation that could "level" the Himalayas, the region may develop as a new growth engine of the world and become a fertile ground for other countries to invest in.

Nepal is an inland country with only two neighbors: China and India, two rising powers with vast potential for future economic development. Situated between the two, Nepal can naturally play a role as a bridge and bond.

It will be of great strategic significance and interest for the three neighbors - China, India and Nepal - to establish an economic corridor and build a community with a shared future. If all three work together to strengthen connectivity, the Himalayas will no longer be a barrier, but will be able to link neighbors geographically and culturally.

Nepal is an independent sovereign state. It has a right to choose its own development model and pursue an open strategy that is in line with its own interests. Instead of being made a pawn in geopolitical games, Nepal should be seen as a stage for practicing the China-India Plus formula.

China, India and Nepal should give up the zero-sum mentality, replace geopolitical games with geo-economic cooperation and make full use of the geographic advantages to bring real benefits to their people.

Meanwhile, some Western media outlets still stick to their pattern of negative reporting about China. Certain Westerners have always seen China-Nepal cooperation with prejudice. Neither China nor Nepal should be bothered about this.

China and Nepal have long respected, understood, trusted and supported each other, treated each other as equal and shared a symbiotic relationship, which is good enough to serve as a model.

Nepal has always adhered to the one-China principle. It never allows Tibet's secessionist forces or any other forces to engage in anti-China activities on its territory. China highly appreciates this.

No country wants its own territory to be used as a base for hostile acts against a third country. Nepal's practices are highly compatible with the purposes and principles of the UN Charter, are conducive to maintaining Nepal's domestic security, stability and socio-economic development, and demonstrate the country's role as a responsible regional player.

Certain countries may be accustomed to their old habit of infiltrating other states, acting subversively against governments, and being behind color revolutions, so they can hardly understand the synergy between China and Nepal over core interests.

The spring of China-Nepal cooperation has arrived. People on both sides of the Himalayas are expected to hold hands and move toward a common future.

The author is the deputy director of the Department for Asia-Pacific Studies at China Institute of International Studies.

Elections Is Just A Month Away: Alliance Is Making Is Making By Agencies 4 days, 1 hour ago