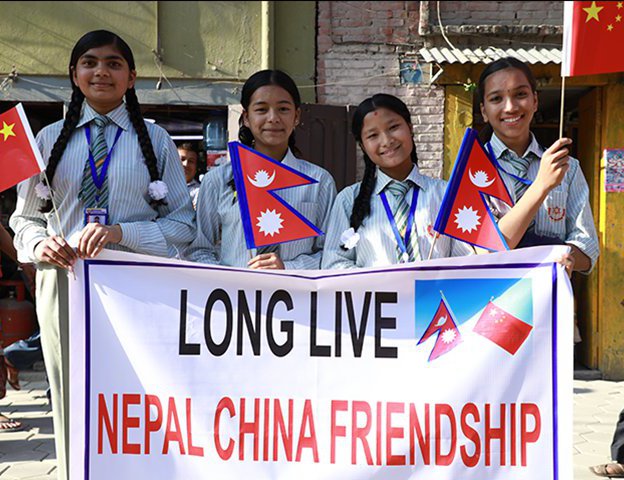 By Shen Weiduo in Kathmandu

Chinese President Xi Jinping arrived in Kathmandu, capital of Nepal, for a state visit on Saturday afternoon. It is the first visit for a Chinese president since 1996 to the Himalayan nation, observers believe the visit is set to lift the two countries' diplomatic relationship to a new heigh, injecting an impetus of respect and mutual trust, further boosting exchanges in various sectors.

Experts predict that more cooperation under the China-proposed Belt and Road Initiative (BRI), and the broad trans-Himalayan multi-dimensional connectivity network, will stem out from this historic trip.

Concluding his second informal summit in India with Prime Minister Narendra Modi, President Xi, at the invitation of President Bidya Devi Bhandari, will be in Nepal over this weekend.

Preparations to welcome the Chinese President started days or even weeks ahead. Chinese national flags flutter around the city and portraits of the two countries' leaders hang on the road leading to the Tribhuvan International Airport.

Banners reading "Long Live Nepal-China Friendship" and "Congratulations on the 70th Anniversary of the Founding of the People's Republic of China," adorn the main streets of Kathmandu.

Besides, lots of local people were seen waving flags to accord a warm welcome to the visiting Chinese leader.

Armed police are busy patrolling blocks and streets of Kathmandu.

Local media reported that all three security agencies, the Nepal Police, Armed Police Force and Nepali Army, have beefed up coordination to ensure high-level security for the "VVIP guest." Frequent meetings have been held to leave no stone unturned as far as the VVIP security is concerned.

"We've deployed more than 1,000 traffic police on the road and we want to clear all roads, and we are managing people who are moving here so that they can use alternate routes….and I think we have managed everything for the VVIP," Col Nawaraj Gurung, chief security officer in charge of President Xi's visit, told Global Times on Saturday.

"All the security officers, and all citizens; we're going to warmly welcome the Chinese VVIP."

Xi will also meet with co-chairman of the Nepal Communist Party Pushpa Kamal Dahal, also known as Prachanda, and leaders of the country's Federal Parliament and other political party leaders.

Experts noted that this historic visit, which has been long-awaited by the Nepalese people, is set to lift bilateral ties, and will bring tangible results, especially in regards to the BRI and the trans-Himalayan multi-dimensional connectivity network under it.

The trans-Himalayan multi-dimensional connectivity network is currently a key strategic link between the two countries and is gradually taking shape. The two countries are working towards expanding border ports, railway, road, aviation and telecommunications networks, according to the Chinese Embassy in Nepal.

The China-Nepal cross-border land cable has successfully been put into commercial operation, the two sides have also reached initial agreement on issues such as increasing air routes between the two countries, according to the Embassy.

Trade and investment, post-disaster reconstruction, energy and tourism will be the main sectors where the two might cooperate further in the future, and observers predict significant deals might be inked this time.

Wu Lingcheng, a deputy director of Nepal office of Yunnan Provincial Energy Investment Group Co, who's now responsible for the Tamakoshi 3 Hydropower Station project in Kathmandu, told the Global Times that the energy sector could be a future focus of cooperation, and Xi's visit could accelerate the operation of a series of China-invested energy projects in Nepal, which has greatly benefited local people.

The 200-MW hydropower project under the BRI, with a total investment of around $500 million, is expected to be started in early 2020 and will be completed in three-and-a-half years.

During his Nepal visit in September, Chinese State Councilor and Foreign Minister Wang Yi stressed the importance of the trans-Himalayan multi-dimensional connectivity network, noting that the two should jointly promote the BRI and boost railway, road, air links as well as cooperation in border crossing, energy and cultural exchanges.

China and Nepal signed a memorandum of understanding on bilateral cooperation within the framework of the BRI in May 2017.

"Nepal regards BRI as a new driving force for world economic growth and an open, inclusive, and viable platform for sustainable world economic cooperation through widest possible connectivity among nations and it is a boon for economic emancipation for economically deprived countries," Sundar Nath Bhattarai, founding president of the Association of Former Career Ambassadors of Nepal and founder member of China Study Center and Its Officiating Chairman, told the Global Times.

Bhattarai said that Nepalese people have also been anticipating for a cross-border railway network between Nepal and China, a vision, if materialized, will bring about hitherto unparalleled transformation of the region between China, South-West Asia, Nepal, South Asia and also Central Asia.

A pre-feasibility study of the railway has already been conducted.