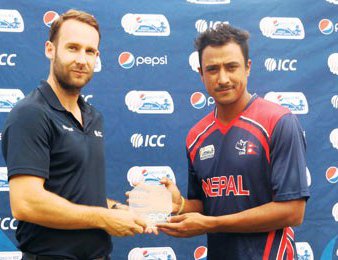 "Great to know that the suspension of Nepal cricket has been lifted and would like to wish the new committee to work for the betterment of Nepal cricket, players and its stake holders. I have hereby decided to resign from my post as the captain of Nepal cricket team. Jai Nepal !!," tweets Khadka.

He has been leading Nepali National Cricket team for a decade. His resignation came after an announcement of International Cricket Council to lift suspension against Nepal with condition.

He replaced Biond Dash in 2009 as a captain of National team. One of his colleague on condition of anonymity said that Khadka was mentally prepared to resign after removal of suspension of Nepali team by ICC.