One Million Children In Nepal Are Stunted: UNICEF

One Million Children In Nepal Are Stunted: UNICEF 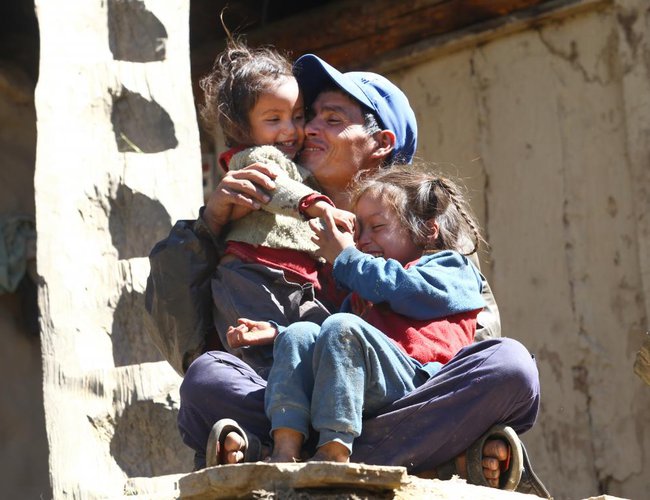 UNICEF warned in a new report on children, food, and nutrition that an alarmingly high number of children are suffering the consequences of poor diets and a food system that is failing them.

Poverty, urbanization, climate change and poor eating choices driving unhealthy diets and 43 percent of children under five are malnourished in Nepal. Similarly, one in every two children under two is eating a poor diet.

According to the State of the World’s Children 2019: Children, food and nutrition finds that at least 1 in 3 children under five – or over 200 million – is either undernourished or overweight.

Almost 2 in 3 children between six months and two years of age are not fed food that supports their rapidly growing bodies and brains. This puts them at risk of poor brain development, weak learning, low immunity, increased infections and, in many cases, death.

In Nepal, 43 percent of children under five are either stunted or wasted or overweight. Similarly, only an estimated 45 percent of children aged between six months and two years are fed at least five out of the eight food groups, which is specified as the minimum diet diversity. Most of the children within this age group eat grains and legumes and only one in three children is being fed egg or fish or meat.

“Despite all the technological, cultural and social advances of the last few decades, we have lost sight of this most basic fact: If children eat poorly, they live poorly,” said Henrietta Fore, UNICEF Executive Director. “Millions of children subsist on an unhealthy diet because they simply do not have a better choice. The way we understand and respond to malnutrition needs to change: It is not just about getting children enough to eat; it is above all about getting them the right food to eat. That is our common challenge today.”

The report provides the most comprehensive assessment yet of 21st-century child malnutrition in all its forms. It describes a triple burden of malnutrition: Undernutrition, hidden hunger caused by a lack of essential nutrients, and overweight among children under the age of five.

The report warns that poor eating and feeding practices start from the earliest days of a child’s life. Though breastfeeding can save lives, for example, only 66 percent of children under six months of age are exclusively breastfed in Nepal and an increasing number of children are fed infant formula. Sales of milk-based formula grew by 72 percent between 2008 and 2013 in upper-middle-income countries such as Brazil, China, and Turkey, largely due to inappropriate marketing and weak policies and programs to protect, promote and support breastfeeding.

As children begin transitioning to soft or solid foods around the six-month mark, too many are introduced to the wrong kind of diet, according to the report. In Nepal, close to 38 percent of children between six months and two years of age are not fed any fruits or vegetables. Two-thirds of children do not eat any eggs, dairy, fish or meat.

As children grow older, their exposure to unhealthy food becomes alarming, driven largely by inappropriate marketing and advertising, the abundance of ultra-processed foods in cities but also in remote areas, and increasing access to fast food and highly sweetened beverages.

As a result, overweight and obesity levels in childhood and adolescence are increasing worldwide. From 2000 to 2016, the proportion of overweight children between 5 and 19 years of age doubled from 1 in 10 to almost 1 in 5. Ten times more girls and 12 times more boys in this age group suffer from obesity today than in 1975. 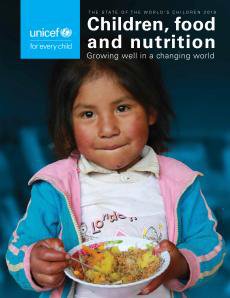 The greatest burden of malnutrition in all its forms is shouldered by children and adolescents from the poorest and most marginalized communities, the report notes. Only 1 in 5 children aged six months to two years from the poorest households eat a sufficiently diverse diet for healthy growth. Even in high-income countries such as the UK, the prevalence of overweight is more than twice as high in the poorest areas as in the richest areas.

The report also notes that climate-related disasters cause severe food crises. Drought, for example, is responsible for 80 percent of damage and losses in agriculture, dramatically altering what food is available to children and families, as well as the quality and price of that food.

To address this growing malnutrition crisis in all its forms, UNICEF is issuing an urgent appeal to governments, the private sector, donors, parents, families, and businesses to help children grow healthy by:

“We are losing ground in the fight for healthy diets,” said Fore. “This is not a battle we can win on our own. We need governments, the private sector, and civil society to prioritize child nutrition and work together to address the causes of unhealthy eating in all its forms.”

Chanda Led Maoist And The Government To Hold Talks By NEW SPOTLIGHT ONLINE 2 days, 13 hours ago