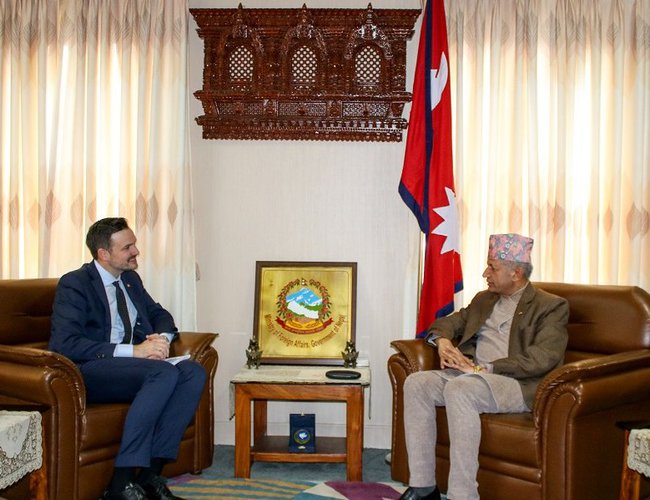 Minister for Foreign Affairs Pradeep Kumar Gyawali and Minister of International Development of Norway Dag-Inge Ulstein held a meeting at the Ministry this afternoon.

During the meeting the two sides exchanged views on various aspects of bilateral relations with special focus to enhancing cooperation in the areas of energy, trade and investment. Issues of mutual interest in the regional and multilateral forums, including impacts of climate change, were also discussed during the meeting.

Minister Ulstein is on a three-day visit to Nepal to participate in the Scaling Up Nutrition (SUN) Conference being organized in Kathmandu.

The talks were followed by the signing of a Memorandum of Understanding (MoU) on the establishment of a bilateral consultation mechanism between the Foreign Ministries of Nepal and Norway.

Joint Secretary at the Europe and America Division of the Ministry Nirmal Raj Kafle, and Ambassador of Norway to Nepal Lasse Bjørn Johannessen, signed the MoU on behalf of their respective governments. The two Ministers witnessed the signing ceremony. This mechanism provides a permanent platform to exchange views between the two Foreign Ministries in the overall aspects of bilateral relations on a regular basis.