India being alienated by some neighbors is not only due to China's rise, but also because of New Delhi's handling of ties 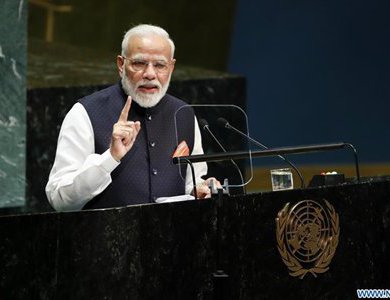 The emergence of China is challenging some of the existing norms of the international system. These norms found place in the system during and immediately after the Cold War. US political scientist Francis Fukuyama has been forced to modify his theory of "end of history." South Asia is adapting to the new reality. But India is looking backward.

The countries on the Indian subcontinent are looking at China not only as a facilitator of infrastructure development and economic partnership but more as a security provider and source of political stability in the region. Much of Indian strategic thinking revolves around winning back estranged neighbors without seriously pondering over the causes of the estrangement.

India being alienated by some neighbors is not only due to China's rise, but also because of New Delhi's handling of ties. Instead of engaging in counterbalancing Beijing, New Delhi must rethink its neighborhood policy, not lose the geostrategic advantage in the region and trusted partners, so as to fulfill the common aspiration of an economically prosperous and peaceful region.

In the political sphere, New Delhi must learn from Beijing the art of engaging in dialogue and partnership with the government of a country, rather than a party. A simple study of India's neighborhood policy reveals that New Delhi is more comfortable with a particular party and when the opposition forms the government in a neighboring country, India finds itself in an embarrassing situation. For example, the victory of Gotabaya Rajapaksa in Sri Lanka's presidential election on November 16 has made the Indian establishment cautious as his party is believed to tilt toward China. In Bangladesh, India is at ease with Sheikh Hasina's Awami League while being hostile to the opposition Bangladesh Nationalist Party.

Entrusting all its support and confidence in one party or person is not a guarantee of their favorable treatment or policies toward New Delhi. India's military intervention to protect Maumoon Abdul Gayoom of Maldives did not oblige him from favoring China. Thereby, India must respect the mandate of the people and build a sustainable partnership with the government of a neighbor.

The smaller neighbors are interested in forging a security partnership with China based on their security assessments. New Delhi needs to deeply contemplate over changed strategic thinking of neighbors to reset its policy directions and priorities. No amount of economic assistance or aid, which is mostly considered by Indian neighbors as alms, can persuade them to trust the Indian establishment.

Infrastructure development and economic connectivity are new tools in diplomacy. South Asian countries are deprived of good infrastructure and economic growth. Under the China-proposed Belt and Road Initiative, Beijing is helping them build new highways, railways and other infrastructure necessary for economic growth. New Delhi, too, is bargaining with Beijing to attract investments. But at the same time, New Delhi's push for the Bay of Bengal Initiative for Multi-Sectoral Technical and Economic Cooperation (BIMSTEC) and the Indo-Pacific Strategy are putting these small countries in dilemma to choose from multiple options. Therefore, these countries are now taking a leaf out of India's foreign policy during the Cold War, which advocated nonalignment but hedging to maximize national interests. New Delhi must not push these countries to choose sides but let them decide what is right for their people and country.

New Delhi's dwindling commitment to South Asian Association for Regional Cooperation (SAARC) in the backdrop of a tense relationship with Pakistan further eroded the credibility of India as a genuine and responsible actor in the region. Thereby, rejuvenating SAARC will go a long way in restoring faith and confidence in the regional leadership of India.

People-to-people exchanges as well as cultural and geographical proximity have their own disadvantages. Speaking the same language quickly disseminates hate messages across the border, instilling and deepening existing hatred. Therefore, political leaders and media must desist from provocative statements. In case of China-India tensions, some messages are lost because of the language barrier. Translations have a minimal impact unless they are not issued in a common language, English.

In a nutshell, India's neighborhood policy should be independent of any power game in the region to win over its neighbors but to formulate a common strategy under SAARC to bring shared prosperity in the region.

EU And Nepal To Close The NEARR Facility By NEW SPOTLIGHT ONLINE 2 hours, 13 minutes ago