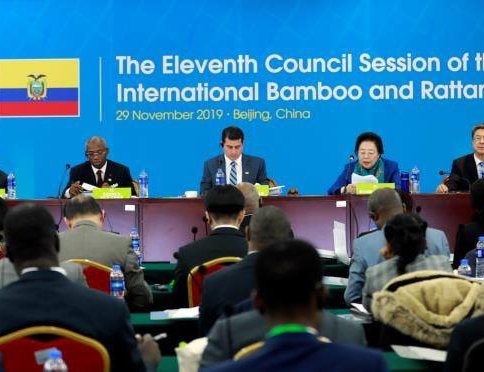 Delivering the country statement at the 11th Council Session, Ambassador Leela Mani Paudyal said that Nepal is firmly committed to INBAR’s mission, goals and priorities as contained in the INBAR Establishment Agreement as well as INBAR’s Strategy 2015-2030, and that it looked forward to working closely with all Member States in fulfilling INBAR’s mandate.

Highlighting the contributions of bamboo and rattan as important non-timber forest products in Nepal’s economy, culture and rural livelihood, Ambassador Paudyal said that the Government of Nepal attaches high priority to bamboo and rattan resources as a way to promoting environmental conservation, livelihood improvement and sustainable development.

He informed that in this regard, the Government of Nepal has been implementing several important initiatives such as National Plantation Campaign, the National Bamboo and Rattan Strategies, Forestry, Environment and Agriculture Sector Projects, and National Bamboo Resource Assessment and Monitoring System, and expressed Nepal’s willingness to collaborate more closely with the INBAR Secretariat and its member states for common benefit.

He expressed sincere thanks to all INBAR Member States for extending their valuable support to Nepal’s application for the position of Vice-Chair of the 12th Council Session.

The 11thCouncil Session was attended by Jules Doret Ndongo, Minister of Forestry and Wildlife of Cameroon, Ms. Jiang Zehui, Co-Chair of INBAR Board of Trustees, Peng Youdong, Deputy Administrator of National Forestry and Grasslands Administration of China, and Ali Mchumo, Director General of INBAR Secretariat, and delegations from member states.

International Bamboo and Rattan Organization (INBAR)is an internattional intergovernmental body established in 1997 with the Secretariat located in Beijing. Nepal is one of its nine founding member states. Currently, the organization has 46 members.

Nepal Is Committed To End All Kinds Of Discrimination: Foreign Minister Gyawali By Agencies 5 days ago