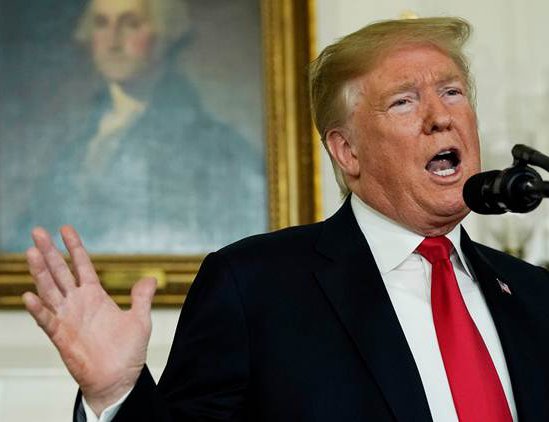 So, instead, he disrupted everything else.

During his first few NATO meetings, Trump deepened a widening rift between him and the French president and defended NATO in perhaps his strongest terms as president before questioning the alliance's collective defense pledge. He commented repeatedly and at length on the impeachment proceedings back home. He proclaimed “confidence” in North Korean dictator Kim Jong Un but then called him "Rocket Man" again. He toyed with waiting until after the 2020 elections to strike a trade deal with China, rattling the markets.

It was a startling cascade of news, even by Trumpian standards, that started with a 52-minute Q&A with reporters, and continued across two other bilateral meetings with world leaders. It ensured the American president would yet again take center stage among world leaders, who had gathered for two days to celebrate NATO’s 70th anniversary. And it also put Trump, ever the contrarian, in the unusual position of defending NATO.

Trump started the day with a sharp broadside against French President Emmanuel Macron, made as he was sitting next to the NATO leader, Jens Stoltenberg. Specifically, Trump admonished the French president for his recent description of NATO as experiencing "brain death."

“It’s a tough statement when you make a statement like that. It’s a very, very nasty statement to essentially 28 countries,” Trump said before launching into a broader attack on Macron and France, while standing up for NATO.

“France is not doing well economically at all. They’re starting to tax other people’s products,” Trump added. "They’ve had a very rough year and you just can’t go around making statements like that about NATO. It’s very disrespectful.”

It was an odd look for the president. During his 2016 campaign, Trump harped on the idea that the U.S. was being treated unfairly by other NATO alliance countries that didn’t nearly spend as much, proportionally, on their own militaries as the U.S. But as other allies up their spending, Trump has become a greater fan of the longtime alliance — especially as his sometimes rival Macron has voiced criticism of it.

Hours after his remarks, Trump came face-to-face with Macron, where the tension between the two spilled over during a testy exchange about the Islamic State. Trump has complained that European countries are not taking back captured ISIS fighters, and he decided to directly confront Macron about it on Tuesday.

“I have not spoken to the president about that," Trump said before turning to Macron. "Would you like some nice ISIS fighters? I can give them to you."

Macron retorted that he would take a "case-by-case approach" before seeming to chide Trump over his boasts that ISIS is defeated and his move to withdraw some U.S. troops from the Middle East who had been helping in the ISIS campaign.

“Don't make any mistake — your No. 1 problem are not the foreign fighters," Macron said. "This is the ISIS fighters in the region, and you have more and more of these fighters due to the situation today.”

But overall, Trump was much more conciliatory in person to the French president, not mentioning the "brain death" comment and downplaying a trade dispute between the two countries. 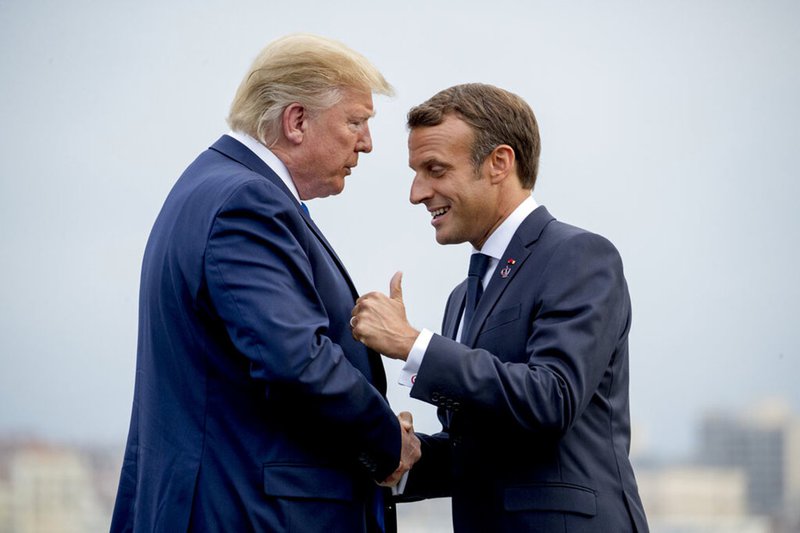 “We have a minor dispute I think we will probably be able to work it out," Trump said. Throughout the day, Trump's commentary veered all over, answering question after question as he sat next to his silent counterparts.

He weighed in on topics as diverse as North Korea’s recent missile tests, Iranian protests, the China trade deal and impeachment.

He delved into his relationship with the North Korean dictator, resurrecting his “Rocket Man” nickname but insisting the two men were close — a fact that Trump said gives him hope about a deal on nuclear weapons, despite the country’s recent missile tests.

“We’ll see what happens. It may work out. It may not, but in the meantime, it’s been a long time. President [Barack] Obama said it’s the No. 1 problem and it would’ve been war. You’d be in a war right now if it weren’t for me,” Trump said.

On the fate of a China trade deal, Trump said he felt no pressure to come to any agreement, even previewing that he might delay a deal until after the 2020 presidential election.

“In some ways, I like the idea of waiting until after the election for the China deal,” he said.

And on impeachment, Trump continued to call the congressional probe a “hoax” and a “scam,” as House Democrats move toward a vote on whether to impeach Trump in the coming weeks.

When asked if the impeachment process weakened his position at NATO, Trump insisted it did not, even though his administration has been pummeling Democrats for holding an impeachment hearing while Trump is overseas. Trump argued that he already knew the world leaders in attendance.

“It’s done for purely political gain,” Trump told reporters. “They’re going to see whether or not they can do something in 2020, because otherwise they’re going to lose.”

By the time Trump met with Canadian Prime Minister Justin Trudeau Tuesday afternoon, he was already responding to the news he had created earlier in the day. He opened the session with reporters by cleaning up comments he had made during his prior meeting about the anti-regime protests in Iran, which is experiencing its worst unrest in decades.

"A question was asked just a little while ago about supporting the people of Iran, and they are going through a very tough period — we do support them totally,” Trump told reporters, “and have supported them from the beginning.”

The remark was an attempt to clarify a cryptic answer he gave during his meeting with Macron about whether the U.S. supported the protesters.

But Trump then quickly raised eyebrows on another subject while sitting next to Trudeau, giving an evasive answer about whether the U.S. would commit to defending NATO countries that aren't hitting the alliance's domestic military spending goals.

“You know, I’m going to be discussing that today, and it’s a very interesting question, isn’t it," he said.

And, of course, Trump eventually veered back to impeachment.

"The Republicans have never been stronger, never been more unified," he said. "The Democrats have gone crazy."

Later on Tuesday, Trump will attend an event at Buckingham Palace with members of the British royal family.

He is also expected to meet with British Prime Minister Boris Johnson during his time in England, where Trump remains deeply unpopular.

But as of late Tuesday, British politics was the one subject about which Trump had been demure, living up to a White House pledge not to interfere in the country’s Dec. 12 elections, which could determine how, when, or even if Britain leaves the European Union. British officials had been preparing for Trump to drop an unpredictable bomb into the race.

“I don’t want to complicate it,” Trump said about staying out of the U.K. elections. “Look, I’ve won a lot of elections for a lot of people. If you look just over the last few months, two elections in North Carolina I won. I helped the governor of Kentucky. You know that I was a fan of Brexit. I called it the day before.”

But he did throw in a small compliment for Johnson: “I think Boris is very capable, and I think he’ll do a good job.”