MASHAV Heads Discuses The Potential Areas Of Cooperation With Nepal

MASHAV Heads Discuses The Potential Areas Of Cooperation With Nepal 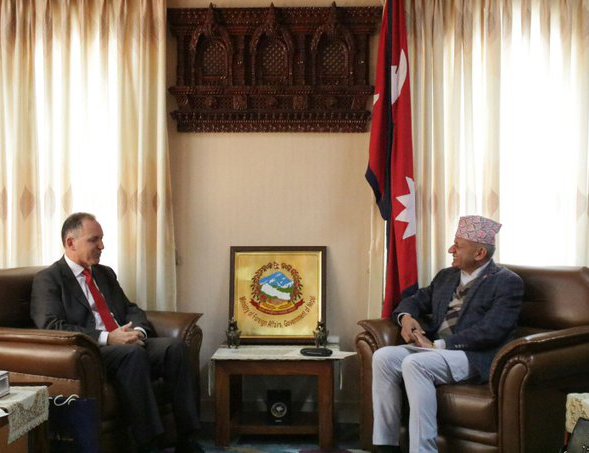 Ambassador Gil Haskel, Head of MASHAV (Israel's Agency for International Development Cooperation), has called on the Minister for Foreign Affairs Pradeep Kumar Gyawali at the Ministry. Various aspects of bilateral relations including the ongoing as well as potential areas of cooperation between Nepal and Israel were discussed during the meeting.

During the meetings, matters of bilateral relations as well as possible areas of cooperation between Nepal and Israel including the establishment of agriculture centers of excellence in Nepal were discussed.

Dr. Anjan Shakya, Ambassador of Nepal to Israel, Benny Omer, Ambassador of Israel in Nepal, as well as official from the Ministry of Foreign Affairs participated in the meetings.

Ambassador Gill Haskel is on a visit to Nepal from 8 to 12 December 2019 at the invitation of the Ministry of Foreign Affairs. MASHAV has been providing trainings to Nepali nationals in various fields, especially in the agriculture sector through their ‘Learn and Earn Program’ in Israel which has contributed in imparting knowledge and skills to young Nepali farmers in modern agriculture technology.