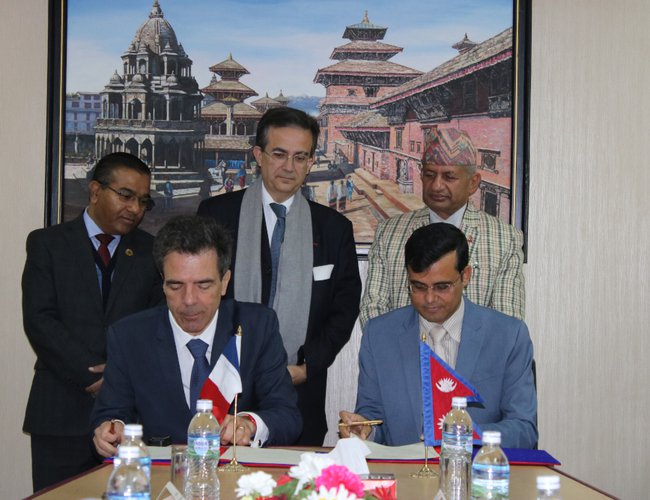 With a view to reviewing the bilateral relations and sharing views on regional and international issues of common interest on a regular basis, the Governments of Nepal and France have established a Bilateral Consultation Mechanism at the foreign ministry level. A Memorandum of Understanding (MOU) to this effect was signed in Kathmandu this morning.

Nirmal Raj Kafle, Joint Secretary of Ministry of Foreign Affairs and Francois Xavier Leger, Ambassador of France to Nepal, signed the MOU on behalf of their respective governments. The signing ceremony was witnessed by Pradeep Kumar Gyawali, Minister for Foreign Affairs, and the Nepali and French delegates to the first meeting of the Mechanism.

Foreign Secretary Shanker Das Bairagi and Thierry Mathou, Director for Asia and Oceania of the Ministry of Europe and Foreign Affairs of France, led their respective delegations to the meeting.

During the meeting, the two sides took stock of all aspects of bilateral relations and exchanged views on further promoting cooperation between the two countries. Views were also shared on the importance of continuing the exchange of high level visits, in the context of the successful visit of K P Sharma Oli, Prime Minister of Nepal, to France in June this year.

The two sides discussed the various ways and means of enhancing economic partnership, including in the areas of trade, tourism and investment, and promoting people-to-people contacts. Nepal requested the French side to encourage its private sector to explore opportunities in the Nepali market given the political stability, policy and institutional reforms and a business-friendly environment created in the country. The French side stressed on the need to enhance Nepal’s competitive edge, including through branding its organic products. It also agreed to provide cooperation towards making the Visit Nepal Year 2020 a success. 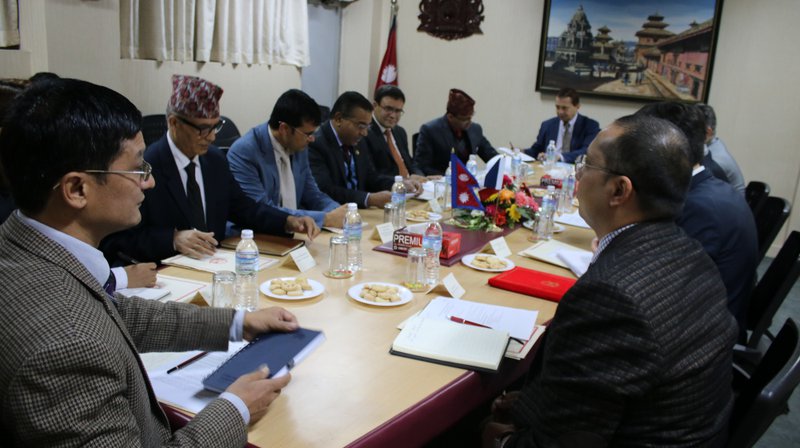 According to a press release issued by Ministry of Foreign Affairs, matters of regional and international importance were also discussed during the meeting. The two ministries agreed to further engage in several issues of common interest such as Climate Change and the UN Peacekeeping. With regard to the upcoming Sagarmatha Sambaad, France will positively consider its meaningful participation in this international dialogue dedicated to important issues of Climate Change and its effects on mountains.

Prior to the meeting of the Bilateral Consultation Mechanism, Director Mathou paid a courtesy call on Minister Gyawali at the latter’s office. During the meeting, various matters of mutual interest were discussed. The two sides also shared their views on the contributions made by the visit of Prime Minister Oli to the Nepal-France partnership and cooperation as well as on the priorities ahead to keep the momentum.

338 Households Displaced In Fungling Due To Fire By Agencies 12 hours, 28 minutes ago

Chanda Led Maoist And The Government To Hold Talks By NEW SPOTLIGHT ONLINE 22 hours, 54 minutes ago

Nepal Is Committed To End All Kinds Of Discrimination: Foreign Minister Gyawali By Agencies 6 days, 22 hours ago