Resilience And Poverty In Kathmandu: The Story Of An Encounter

At nine, he lost his father. He has to help to feed his family from then. Even if he has never learned to read and write, his English is very good 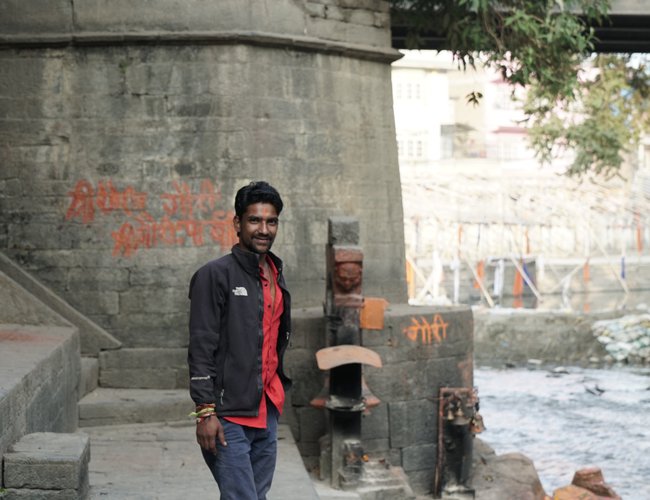 I'm jumping on the bus. I have heard the controller shout the name of my neighborhood: balajubalajubalaju. On the way, nothing seems to be able to get me out of my thoughts - not the nightclub music that resounds in the car, not even the 25 people squeezed like sardines in a bus supposed to carry 10 of them. A sardine puts a two-year-old child on my lap. The child is placid like any self-respecting sardine. And so do I. Back home, I remember the afternoon. A garden, a meeting, an invitation, monkeys, temples, a tea with milk, ginger and then the bus. Again.

The Dream Garden is the only green space in the city center. When I arrive, I accidentally walk on a squirrel. The poor wounded animal starts to tremble. It suffers, it moans. A Chinese tourist then finds the right time to take a picture of the poor animal. I despise the tourist but forget that, in the story, I am the murderer! Coup de grâce. Photographed one last time, the animal dies.

Pauline, whom I work with, beckons to me. She is accompanied by a Nepalese. The young man's name is Vicki and helped Pauline enters the garden. He seems to be in his thirties but is only 25 years old. The harshness of life has already left its mark.

At nine, he lost his father. He has to help to feed his family from then. Even if he has never learned to read and write, his English is very good. He works as a street shoemaker in Kathmandu - he cleans the shoes of tourists. So he learned English by talking to them. He is sociable, pious, tolerant, open, clean and handsome. He is small and slim and wears red converse, a western-style jacket and an open red shirt.

Out of expectations, he invites us to have tea at his house. On the way, he lights candles in our "honor" and smears a speck of orange dust on our forehead as a sign of good luck. At home, his mother welcomes us. The 45-year-old woman seems to be 70. The already old lady prepares us tea and offers us cookies. To clean the cups, she uses her scarf like a cloth. She pours the ginger, sugar, tea and milk into a small saucepan and places it on the electric stove at the foot of the bed. The tea is hot but good. The room has a floor bed, an electrical outlet and a small auxiliary stove. At the back of the room is a small Hindu temple in which the family likes to burn incense to honor the Gods. "Where do you sleep? "I asked innocently. "On the floor," he said to me, a disturbing semblance. The family sleeps together in the same room. 5 in a room of 8m4 = 1.6m4 on average per person. His mother then makes Indian bread. The family only eats once a day and the lady finds it normal to cook what little she has for complete strangers!

Vicki has a smile on his face. He's glad he met us. He is happy to share this moment. He wants to see us again very soon. To exchange, discover, laugh, share. So do we, by the way. He seems happier than we are. He lives full of anguish and doubts. We all are. But he has more reasons. Mine is ridiculous. I don't know about yours.

A few days later, I dare say that true friendship is being forged between us. He invites us to his house, which makes us discover the city. We understand better how some people learn to live with nothing except the support of those around them. Which is already a lot. Two English friends soon leave town and have $500 to give to someone who really needs it. Naturally, the two English people think of Vicki. Recently the police confiscated his work equipment, the toolbox he needs to work on the street. The reason: he doesn't have the permit to do so. The young man obviously cannot afford the permit, which amounts to more than $400, or 46,000 Nepalese rupees. With Pauline, we buy him the toolbox he needs and the English men offer him the money he needs to get “the” license. The young man refuses. We are at his house. His mother cries when she sees the precious dollars coming out of our pockets. He bursts out crying, overwhelmed by emotion. And so are we. He feels unworthy to receive so much money all at once. I feel unworthy to be so privileged compared to him. We are even. I exclaim that it is certainly karma (in which he believes deeply!). We were supposed to meet and that moment had to come. It is the consequence of all his good deeds. We finally convince him and he accepts the money.

When I discuss with other internationals, I am surprised by the criticism from all sides. "He probably found the cash cowshed needed to get the money he is unable to earn on his own" I am told. But they don't know this story. We do. Would they think the same if they knew? Perhaps. The Westerners fear for their money, fear culture shock, fear meeting the other, fear being swindled or manipulated.

For the first time, I am ashamed to be a Westerner. I, faced with so much inequality and injustice, am ashamed. I could be him, he could be me. But he is a Hindu God. Like Ganesh or Kali, there is no pain, sadness, bitterness or resentment in him. If we beatify the Hindus, he deserves to be a saint.

He's 25 years old. So do I. He has a little sister. So do I. He has brothers. So do I. He lives in Kathmandu. So do I. He sleeps on the floor. I don't. But he was at the Garden of Dreams. With me. And he shares his bread. With us. He walks out of the street. Like us. But he lives right here... Without us. And in indifference.... Of all of us.

EP DELEGATION Visit For Cause By A Correspondent 4 days, 22 hours ago