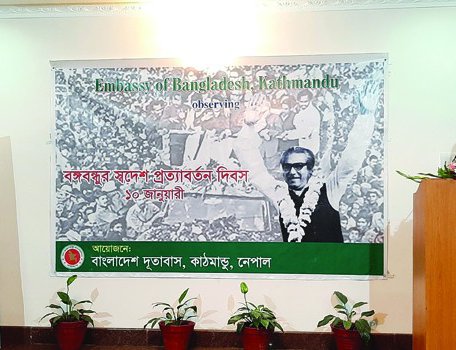 The Bangladesh Embassy observed the historic Homecoming Day and Countdown of the celebration of birth centenary of Bangladesh’s Father of the Nation Sheikh Mujibur Rahman on Friday.

On the occasion, the Bangladeshi Embassy here organised a programme to celebrate the Day with due pomp and festivity.

The program that began with the reading out of messages of the President and Prime Minister of Bangladesh, was followed by a screening of a documentary on Bangabandhu, titled “Amader Bangabandhu”.

The Embassy also screened a short documentary produced by the National Implementation Committee for the celebration of the birth centenary of Bangabandhu.

This was followed by a discussion session, in which, the speakers recalled Bangabandu’s achievements and extolled his single-minded devotion to the cause of the people of Bengal and his uncompromising position against exploitation and autocracy and his vision of establishing “Sonar Bangla”.

Paying homage to Rahman, Ambassador of Bangladesh to Nepal Mashfee Binte Shams said that on this day newly liberated Bangladesh felt that it had achieved the ultimate victory and now the nation could focus on rebuilding the war-torn country.

She mentioned that the homecoming day of the Father of the Nation was selected for counting down the celebration of his birth centenary.

Nepal And India To Discuss The Whole Gamut Of Bilateral Relations By NEW SPOTLIGHT ONLINE 5 days, 4 hours ago