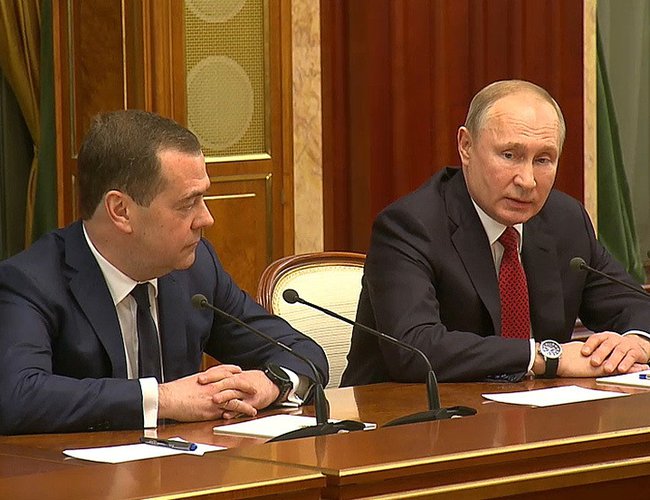 Accepting the resignation, Putin asked the ministers to function as a caretaker government until a new one is formed.

Before announcing the resignation of the cabinet, Medvedev met with Putin to discuss his state-of-the-nation address, which took place earlier on Wednesday, the Kremlin’s press office said.

Putin also said that he plans to create a position of the deputy secretary of Russia’s security council, and offer it to Medvedev.

In his address, Putin proposed several amendments to the constitution.

“In this context, it is obvious that, as the government, we must provide the president with a capability to make all decisions,” which are required to implement the proposed plan, Medvedev said.

Putin proposes major amendments to Russia’s constitution incl. about his own post, says people should vote on changes

The constitution should take priority over international law if the latter violates the rights of Russian citizens or violates Russia’s constitutional principles, President Vladimir Putin has proposed.

Amendments to the constitution could be put to a popular vote to ensure “the development of Russia as a welfare and rule-of-law state,” the Russian leader said in his annual state of the nation address.

Adopting a brand new constitution is not necessary because the current one will remain relevant for many years to come, Putin explained. But he did suggest some changes he’d like to see.

One of the key issues Putin outlined was that Russia should abide by international law only if it does not conflict with the constitution. Adopted back in 1993, it should serve as a primary source “in our legal environment,” he stated.

International agreements and treaties, as well as decisions by international bodies may apply in Russia “only to the extent that they do not entail restrictions on the rights and freedoms of people and citizens, and do not contradict our constitution.”

The president then suggested stricter profiling of the top political brass, starting with presidential candidates and going all the way down.

An amended constitution would include compulsory requirements for “persons holding positions crucial for ensuring the country’s security and sovereignty,” including the prime minister, cabinet members, governors, heads of federal agencies, MPs, and judges.

They should be barred from having foreign citizenship or residence permits for other nations, Putin proposed.

Anyone willing to run for president will be subject to “even more stringent requirements.” Aside from the absence of foreign citizenship “not only during elections, but also at any time earlier,” a candidate must have lived in Russia for at least 25 years as opposed to the current 10 years.

“I know there’s a debate in our society regarding a constitutional provision that the same person shall not hold the position of the president of Russian Federation for more than two consecutive terms,” he acknowledged. “I don’t think this is a fundamental issue, but I agree with that.”

Meanwhile, Russia’s Central Election Commission signaled a popular vote could be held as early as 2020. “If everything is solved quickly, this may happen this year,” the body’s secretary Maya Grishina said, according to Sputnik.