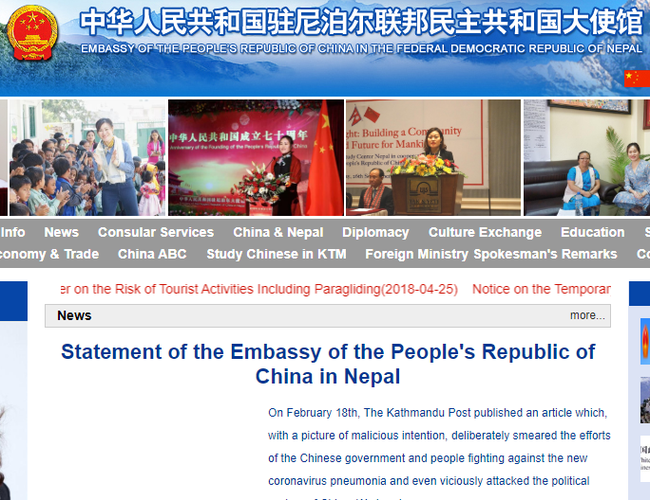 Embassy of the People's Republic of China in Nepal has expressed dissatisfaction over an article that was re-published today in an English daily in Nepal.

"On February 18th, The Kathmandu Post published an article which, with a picture of malicious intention, deliberately smeared the efforts of the Chinese government and people fighting against the new coronavirus pneumonia and even viciously attacked the political system of China. We hereby express our strong dissatisfaction and firm protest to it," read the statement.

Full text of the statement:

On February 18th, The Kathmandu Post published an article which, with a picture of malicious intention, deliberately smeared the efforts of the Chinese government and people fighting against the new coronavirus pneumonia and even viciously attacked the political system of China. We hereby express our strong dissatisfaction and firm protest to it. This fully revealed its ignorance and prejudice on China, deeply hurt the feelings of the Chinese people, and sparked strong indignation and condemnation among the Chinese people and the Nepali friends from all sectors.

The new coronavirus pneumonia is an international public health emergency. The Chinese government has taken the most comprehensive and strongest measures to contain the epidemic, and those efforts are yielding positive effects. Many measures taken by the Chinese government are far beyond the suggestions of WHO and the requirement of the International Health Regulations. We have built several hospitals with thousands of beds within a very short period of time, which is a vivid manifestation of China’s speed, efficiency and power, and fully demonstrate the strengths of China’s system.

As a responsible major country, China has been acting in an open and transparent manner from the very beginning and has been providing timely updates on the epidemic and pursuing international cooperation. We have not only done our very best to ensure the life, safety and health of the Chinese people but also effectively curbed the spread of the epidemic beyond our borders, making China's contribution and sacrifice for global public health. More than 160 countries and international organizations, including Nepal and WHO, has commended China on multiple occasions for its responsible actions, speaking highly of China's decisive response.

Virus knows no borders. In 2009, the H1N1 flu outbreak in some western country had spread to 214 countries and regions, lead to more than 18449 deaths that very year. However, that country didn’t declare it as a national emergency until six months later. Nobody credited it to that country's political system. Now, some western media took the opportunity to politicize the epidemic, criticize China’s efforts to fight against the epidemic and attack China’s political system. This is definitely a double-standard activity.

Public opinion will prevail. Since the outbreak of epidemic, the Government of Nepal and Nepali people have expressed their support to China in various ways. We are deeply moved and will remember it forever. The Nepali media also reported the epidemic and the prevention and control measures taken by China in an objective and fair perspective. It has played an important role in helping the Nepali people to understand the true situation, strengthening the prevention of the epidemic, and promoting the international cooperation in joint prevention and control.

"We are ready to accept any meaningful suggestions on how to control the spread of the epidemic as soon as possible. But we firmly oppose any ulterior motives and even malicious attacks on the political systems of other countries. It is regrettable that Anup Kaphle, Chief Editor of The Kathmandu Post has always been biased on China-related issues. This time he went as far as disregarding the facts and becoming a parrot of some anti-China forces and, therefore, his ulterior purpose is destined to failure. The Chinese Embassy in Nepal has made solemn representations to the newspaper and himself and reserves the right of further action.

Local Levels Oppose To Shutdown The Schools By Agencies 3 days, 5 hours ago

Helicopter Used To Drop Water On Wildfire In Shivapauri By NEW SPOTLIGHT ONLINE 4 days, 6 hours ago