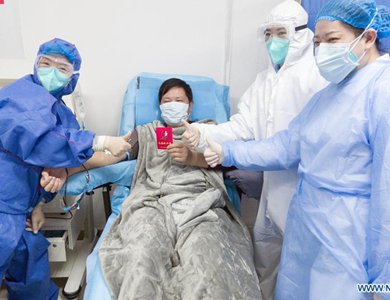 Consecutive declines of new confirmed cases of COVID-19 offered a flicker of hope, but observers said it is too early to declare victory or an inflection point, as Wuhan, the epicenter which is still under lockdown and just finalized the task of screening virus patients, now faces other tough tasks, such as dispatching enough resources to guarantee treatment of infected cases and preventing new transmissions.

Wuhan on Thursday issued a new measure, requiring residents at home to measure and report their temperatures twice a day. Those who have fever symptoms should be sent to hospital.

This follows the city's mission to mobilize local residents to to screen all confirmed and suspected infections of the virus, which was completed on Wednesday.

After all in need were rounded up, the city reached another stage in the battle, which is how to guarantee enough medical resources to treat patients and ensure quarantine work, Yang Zhanqiu, deputy director of the pathogen biology department at Wuhan University, told the Global Times.

Ding Xiangyang, a member of the central government steering group for the COVID19 epidemic, said at a Thursday press conference that the government must ensure all patients in Wuhan to get treatment. He also said the supply of medical resources to Wuhan and Hubei are guaranteed.

Wang said it is a pressing task for Wuhan to closely monitor possible new infections and their close contact, to completely cut off the transmissions.

Zhong Nanshan, China's top epidemiologist and the central government's top medical adviser, told a press conference on Monday human-to-human transmission continued in Wuhan, after the city has been under lockdown for almost a month.

The concern is that some patients took long before being treated when they may have already transmitted the virus to others, said Yang, warning that it is vital to contain the virus by rounding them up as early as possible.

The number of new confirmed cases in Wuhan on Wednesday dropped below 1,000 since February 2, according to official data.

Unlike SARS, the novel coronavirus may turn into a chronic disease and exist in the world like the common flu, Wang Chen, a deputy head of the Chinese Academy of Sciences, told the media on Wednesday.

Wang estimated that more than 90 percent of those infected in Wuhan have been screened, but the exact number of patients remains unclear. The silver lining in the past 14 days is that as the number of bed increased, "we got closer to the target of 'rounding up all those who needed to be rounded up.'"

As of Wednesday, a total of 32,395 medical workers have come to Wuhan from across the country to support the fight against the virus, National Heath Commission officials said.

The numbers of novel coronavirus infections reported outside Hubei Province declined for the 16th consecutive day as reported on Wednesday, with 45 new cases. Many places, such as Shanxi, Shanghai, Fujian and Jiangsu did not record a single new case on Wednesday.

Zhou Zijun, a professor at Peking University's School of Public Health, said concerns of a viral outbreak outside Hubei should be dismissed. Those provinces, municipalities and autonomous regions should reboot social and economic activities as soon as possible and gradually loosen their restrictions to avoid enormous disruption of the country's operations, while still remaining cautious and take effective measures to prevent large-scale transmissions.

Simply put, those outside Hubei should not overstate restrictions because of Hubei's epidemic. But Hubei should not loosen its regulation despite the alleviation of the virus' spread in other places, Zhou said.

Experts noted that scientists and medical experts are moving faster to develop a cure. Clinical experiences proved that traditional Chinese medicines can effectively increase the number of lymphocyte of critical patients, said Yu Yanhong, an official at the National Administration of Traditional Chinese Medicine on Thursday.