All eyes will be on the meeting between PM Narendra Modi and US President Donald Trump in Delhi, where an Indo-US trade deal is likely to be discussed 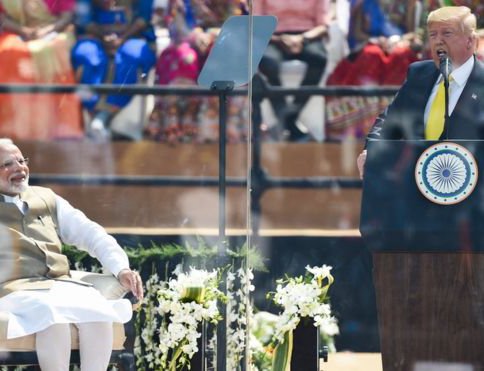 US President Donald Trump on Monday said "America will always remain a loyal friend to India" as he addressed a packed stadium in Ahmedabad, hours after landing in Gujarat's largest city with First Lady Melania Trump and his family. "Namaste, America loves India," President Trump said, drawing applause from the over one-lakh strong crowd. "I would like to begin by thanking my special friend, Prime Minister Narendra Modi. The Prime Minister - the son of a tea seller in this very city - has had a remarkable rise...

He is a great man. Everybody loves him, but he is a very tough negotiator," President Trump said. "Namaste, Trump," PM Modi said, opening his speech at the packed stadium. "America-India relationship is no longer just another relationship, but an inclusive and exhaustive partnership," PM Modi said. President Trump praised India's programmes to give electricity to millions of homes and other policies that have helped the country grow. The Trumps then flew to Agra and visited the iconic Taj Mahal, where they were given a guided tour before flying to Delhi and retiring for the night.

"It is our pleasure to welcome and greet President Donald Trump, First Lady Melania Trump, Ivanka Trump and Jared Kushner... Their visit to India shows the importance the closeness in ties we share," PM Modi said.

"The rise of India in the last seven decades has been remarkable... The pace at which it has grown in the last two decades is phenomenal... The people of India are an inspiration for the rest of the world," President Trump said.

"Every nation has the right to secure and control borders. The US and India have been working to stop terror and fight their ideology. My administration has been working successfully with Pakistan in fighting terror... India has a leadership role in promoting peace in the region," he said.

President Trump's convoy passed through the Sardarnagar area of Ahmedabad, which contains several slums. A four-foot tall, 500-metre-long wall has been built along this section, which residents say is meant to "hide the poor people" ahead of Mr Trump's visit. Local officials, however, say the decision to build the wall was taken well before the presidential visit.

At Mahatma Gandhi's Sabarmati Ashram, President Trump and the First Lady tried their hand at spinning the charkha as PM Modi explained the significance of the traditional spinning wheel to the visitors. PM Modi was seen showing the Trumps around the revered ashram and explaining the marble depiction of Gandhi's three monkeys to Melania Trump.

President Trump and his family were served high tea, which, reports said, featured broccoli samosas and apple pie. "Namaste, Trump" is being seen by many as a parallel to the lavish "Howdy, Modi!" event organised for PM Modi in Houston.

From Ahmedabad, Donald Trump and his family travelled to Agra where they visited the Taj Mahal and were given a private guided tour. "The Taj Mahal inspires awe. A timeless testament to the rich and diverse beauty of Indian culture! Thank you India," President Trump wrote in the visitor's book. Chief Minister Yogi Adityanath, hundreds of artistes welcomed the Trumps at the airport with beautiful performances reflecting the rich culture of Uttar Pradesh. President Trump and his family flew to Delhi on Monday evening for the operative part of the trip, which includes high level talks tomorrow.

An Indo-US trade deal is likely to be discussed. Apart from growing protectionism, Donald Trump's visit also comes against the backdrop of India's multibillion-dollar purchase of a Russian missile shield system.

US President Donald Trump and his wife Melania have visited the Taj Mahal on the first day of their trip to India.

The iconic "monument to love" was the second stop in a 36-hour official visit, Mr Trump's first to India.

Earlier on Monday he landed in Gujarat, the home state of Prime Minister Narendra Modi - who greeted him along with tens of thousands of Indians.

The leaders of the world's two largest democracies will meet on Tuesday. No big deals are expected to be signed.

Trump received an exuberant welcome in the northern city of Agra, which included dancers dressed as peacocks and horses.

While Mr Modi was not present, he was greeted by a close ally of his, Yogi Adityanath, the chief minister of Uttar Pradesh state, where Agra is located.

The Trumps then left for the Taj Mahal, a 17th-Century marble mausoleum built by Mughal emperor Shah Jahan in memory of his queen, Mumtaz Mahal. 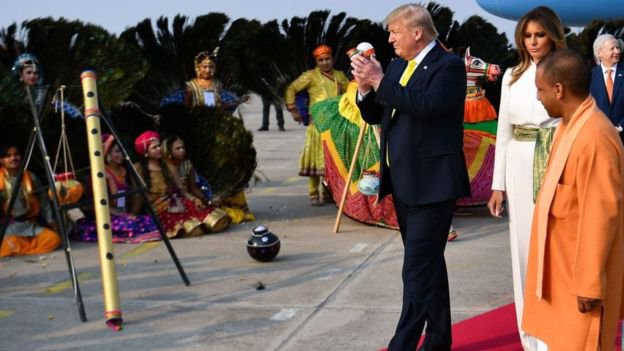 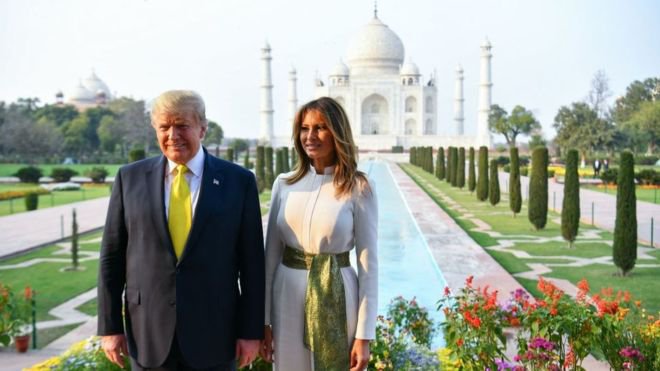