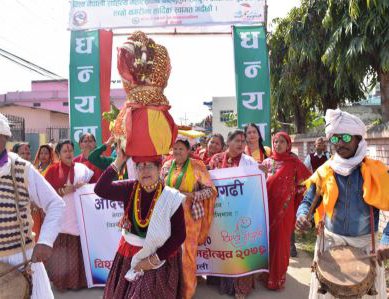 Nepali writers and litterateurs from across globe have arrived here to participate in the Nepali Literature Festival and to discuss the most contemporary issues of Nepali literature RSS reports.

The participants including some of the prominent names in the field of contemporary Nepali literature will deliberate on more than 30 sessions throughout the Festival period which includes a variety of programmes as debates, lectures, interface with writers, literary symposium and cultural events.

According to the organisers of the Festival, the topics of interaction include- Literature and Politics: Conflict or Inter-connection, The Story of Struggle and Success, University Where Loksabha is Not Read, Dignified Steps of a Dignified Race, Journey of Togetherness: the Sweetness of Maha, Destiny and Direction of Nepali Literary Criticism, History and Culture, Are they in Danger?, Influence of the Mahabharata on Nepali Literature, The Slap of Satire: Loving the Abominable, How is the Life of Nepali Speakers Outside Nepal?, and Tomorrow's Nepal in Perspective.

Nepal Is Committed To End All Kinds Of Discrimination: Foreign Minister Gyawali By Agencies 1 day, 21 hours ago