Handover Of The EU Gender Champion Role To The German Ambassador

Handover Of The EU Gender Champion Role To The German Ambassador 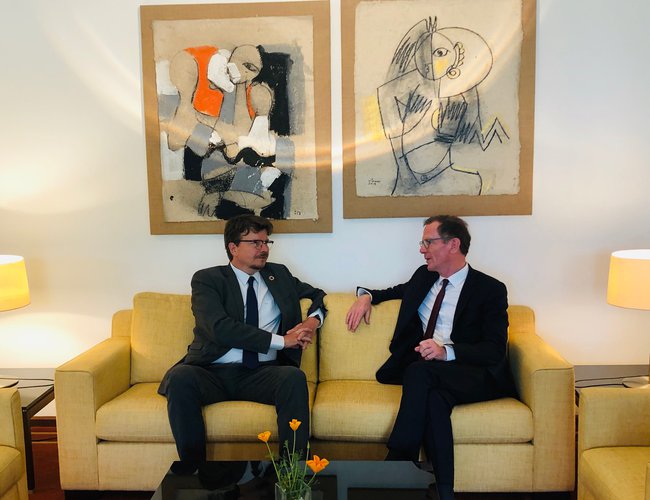 Ambassador Roland Schäfer is taking the position of the EU Gender Champion on 8th March 2020 for the coming six months. The role has been handed over by the previous EU Gender Champion, the Ambassador of the Republic of Finland, Pertti Anttinen in Kathmandu.

During its mandate, Ambassador Schäfer will be open to suggestions from all sides, but intends to focus on two topics. One is gender equality at the workplace, including in business, education and vocational training.

Ambassador Schäfer sees a good basis for an informed discussion between European and Nepali stakeholders in this area. The second issue will be women in conflict situations, an area where Nepal’s experience has a lot to offer to Europe. Roland Schäfer sees his role as an Ambassador for Gender Equality. He will not only focus on rising awareness about a world-wide debate through events and public diplomacy.

Together with his team, he will also work on concrete projects in Nepal which will help promote girls, women and equal rights for them. All dates of events and projects will be announced via the Embassy’s Facebook Page and Website.

The purpose of the globally established initiative “EU Gender Champions” is to promote women’s and girls’ rights in all countries where gender issues matter, embedded in the sustainable development goal no. 5.

For each period of office another ambassador of a European Union member states is designated EU Gender Champion, who then steps up his or her efforts to promote gender equality and women empowerment. Roland Schäfer hopes that by implementing this initiative in Nepal, multiple perspectives and views on the topic of Gender Equality will be advanced.

Nepal Requested India For The Supply Of COVID-19 Vaccines To Continue Administering The Second Dose By NEW SPOTLIGHT ONLINE 9 hours, 41 minutes ago