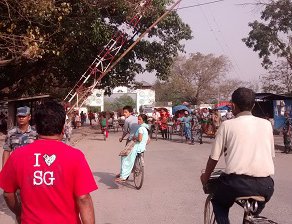 Stepping up measures to control the spread of coronavirus, India has shut down all the immigration check posts except four with Nepal.

According to press release, except those all types of passengers movement from immigration land check posts located at Indo-Bangladesh, Indo Bhutan, Indo Nepal and Indo-Mynamar will be suspended with effect from March 15 till further notice.

Excepts Immigration check posts in Banbasa of Uttarakhand, Sunauli in Utter Pradesh, Raxual in Bihar and Raniganj of West Bengal, all other posts will be shut down till further notice. However, Nepal is requesting two open two more check posts Rupedia in Nepalgunj and Jogbani in Biratnagar

Government of India on Friday announced the closure of all immigration check posts with four neighboring countries. As per the decision, cross-border passenger bus and train services to Bangladesh will be suspended from March 15 to April 15, though freight train services will continue.

The government will allow international passenger traffic only through 19 of the 37 land immigration check posts, and the rest will be closed from midnight on Saturday said Anil Malik. This measure is aimed at facilitating the better screening of people entering India through check posts.

Parshuram Kafle in his report in Nayapatrika daily writes that citizens of both the countries need to carry identity cards while crossing the borders.

Issuing a travel advisory for foreign and Indian nationals, Embassy of India In Kathmandu said on Thursday that the current measures are solely for the purposes of managing public health safety and that these measures do not have any impact on normal travel of Nepali nationals to India.

“The primary intention is to ensure the health and safety of both Indian as well as foreign nationals with bare minimum inconvenience to travel and mobility. These measures would be continuously reviewed depending on the evolving situation,” said a press release issued by Embassy of India.

Nepal To Resume Domestic And International Flights By Agencies 1 day, 16 hours ago

Karnali Highway Closed Due To Landslides By Agencies 3 days, 16 hours ago