Nepal Close Borders With India And China To Stop The Movement Of People : DPM Pokhrel

Nepal Close Borders With India And China To Stop The Movement Of People : DPM Pokhrel 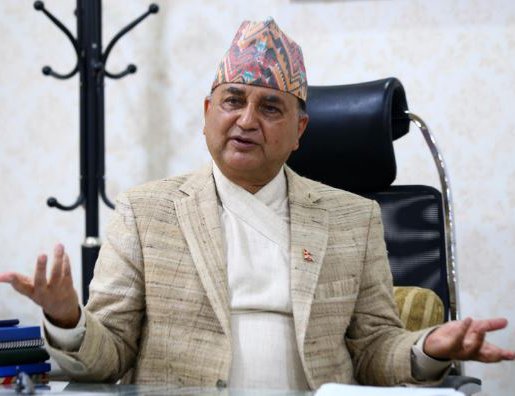 Deputy Prime Minister and Defense Minister Ishwor Pokhrel is heading the high level coordination committee on prevention and control of COVID-19 said that he has been taking decision not for the sake of certain section of society nor for the party in the government but for the entire people. He added that decisions are directed by need, not sentiment. It is for everyone's protection.

In an interview with RSS Chairman Harihar Adhikari Shyamal and reporter Ramesh Lamshal DPM Pokharel said,” We initially banned the people's movement via Nepal-India and Nepal-China borders. It is effective only for people's movement not for transport of goods and surveillance. The decision is not for the sake of certain section of society nor for the party in the government but for the entire people. Decisions are directed by need, not sentiment. It is for everyone's protection. “

He said that people's demand to enter Nepal from India at a time of crisis must be respected adding that only sentiment does not work here.” It is also taken positively by the Indian side too. We had decided to close the border before India imposed lockdown. They were allowed entry once in view of the pandemic, but on condition of quarantine stay. However it was not fully implemented in some areas,” said DPM Pokharel.

“We later urged those (Indians) in Nepal and Nepalis in India to stay in respective places. Arrangement of food and shelter to them is managed by both countries- India to Nepalis and Nepal to Indians. If the Indian government or its Embassy wants their people back, we allow it. If not, we don't ask them to leave citing safety, but provide facility within Nepal. The government has made it clear with Indian government,” said DPM Pokharel.

He said that today doctors and health workers are in the frontline to combat the infection and face this crisis. Driving ambulances and taking patients in the hospital is also alike. They have been working with full commitment. “Their jobs should be respected. By considering this very fact, the government has ensured 100 per cent allowance to them as long as they are involved in this job. Same provision is applicable to those remaining in the second layer too. Insurance of Rs 2.5 million is ensured. We all are ready for sacrifices,” said DPM Pokharel.

"After the formation of high-level committee, we held consultations by inviting leaders of all political parties with the determination of national consensus and commitment. Also, we talked to the Chief Ministers and Social Development Ministers of the States. Likewise, we held talks with drugs producers. As gaps were witnessed, we now have thought to talk with the retailers too. "

SC Issued An Interim Order Against Citizenship Ordinance By Agencies 3 days, 2 hours ago

SC To Start Regular Hearing On Dissolution Of House Of Representatives From June 23 By Agencies 4 days, 17 hours ago