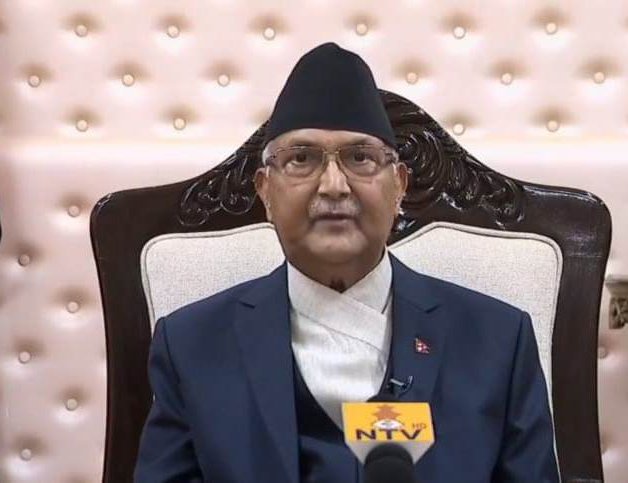 Prime Minister KP Sharma Oli has urged the citizens to alert the upcoming two weeks saying it will be likely to be more challenging for Nepal with regard to preventing and control of the novel coronavirus reports TheRising Nepal.

He added that there is a risk of the surfacing the symptoms of the infections and the spread of the COVID-19 pandemic in the country.

In his address to the nation today, PM Oli advises Nepalis to comply with lockdown orders and observe quarantine rules more strictly for their health safety in the next two weeks.

Prime Minister Oli has made clear that Nepal was at a high risk to be affected by the virus despite containing the spread of the virus.

Prime Minister Oli appealed to Nepalis staying in and outside the country to stay safe amid the global crisis of the COVID-19.

Likewise, PM Oli said that the doctors and health workers striving on the frontline to contain the virus were the soldiers of the war against an invisible enemy. "We all should support and encourage the front line health workers," he said.

Prime Minister Oli said that the lockdown is the only way to check the spread of the virus in today's scenario where the entire globe is researching a vaccine to contain the virus, the PM added.

He highlighted the importance of local-level government and representatives was also reflected by the ongoing crisis.

The Prime Minister elaborated on the measures taken by the Nepal Government to control the effects of the pandemic in the country, the steps that further need to be taken, and responsibilities of various sectors including the general public quoted The Rising Nepal.

“As of today, there are 30,566 quarantine centers in the country, 9,168 people currently in quarantine, 3,259 isolation beds in which 95 people are under treatment. The government has been trying to prevent the spread of infection and to take necessary measures in case of an outbreak,” said PM Oli.

Polymerase Chain Reaction (PCR) method of testing has begun in all seven provinces. Up until yesterday, 1,890 tests have been conducted. Preparations have also been initiated to give pace to start testing from 10 testing centers in the seven provinces. Likewise, preparations have also started to carry out a Rapid Detection Test (RDT) in districts that are currently at high risk.

Prohibitory Order Imposed In Rasuwa For A Week By Agencies 4 hours, 53 minutes ago

Nepal Has Suspended All International Flights By May 31 By NEW SPOTLIGHT ONLINE 16 hours, 8 minutes ago

DAOs Extend Prohibitory Order In Kathmandu Valley Till May 26 By Agencies 22 hours, 14 minutes ago

Kathmandu Valley Will Be Under Prohibitory Order For 15 Days By Agencies 1 day, 19 hours ago