Nepal Is Not For Opening International Flights And Border Movements Until The Crisis Comes Under Control: PM Oli

Nepal Is Not For Opening International Flights And Border Movements Until The Crisis Comes Under Control: PM Oli 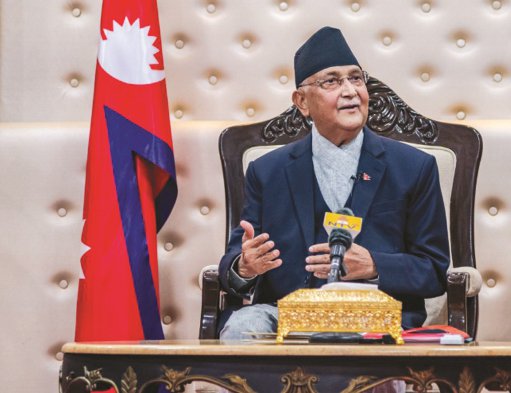 Prime Minister K.P. Sharma Oli has said that the country will continue the lockdown as the primary measure against the COVID-19 pandemic while adopting tighter measures at the borders and social distancing. He said that the government is not for opening international fights and movements until the crisis comes under control.

“We must not talk about opening the border without assessing the situation in India. The government is not for opening international flights and movements until the crisis comes under control. All the countries we talked with have assured facilities to Nepali nationals as their own citizens,”

“This is not the interest of the government; it is the question of the safety of people. It would be better to continue lockdown than to allow the deadly virus to infect more people and kill them. Increased number of death will create other maladies like depression. As it was difficult to maintain social distancing automatically on the part of the people, the government had to enforce the restrictions on the movement and everyday activities outside homes. Lockdown is proved as an effective measure against the coronavirus in other countries as well. Borders ill be controlled until the virus comes under control globally,” he said.

“It would be better to continue lockdown than to allow the deadly virus to infect more people and kill them. Increased number of death will create other maladies like depression,” said Prime Minister Oli to Gopal Khanal and Bed Dhakal.

“Nepal started preparedness well before the pandemic damaged the situation. We could not take the steps distinctive from the neighbouring countries. We could not impose lockdown when the virus was detected in China, because such act would have sent different message to the people and the world. Due to our proactive steps, we have achieved success in containing the virus,” said Prime Minister.

He added that the positive testing in 12 people who were hiding in Terai indicates a serious situation. “There can be cases of transmission to the local people and yet unknown to the government and other people. The government is now conducting rapid tests in order to find such cases,” said Prime Minister.

To control the disease, we have imposed lockdown and social distancing is in practice while health caution and awareness programmes are in practice as per the World Health Organisation’s guidelines and experiences from other countries.

He said that the situation will be under control in Nepal, it wouldn’t be a disaster. Lockdown will be enforced more effectively to foster social distancing. Health awareness campaigns will be continued. The entry-points at the borders will remain shut. No one can enter the country and the government is taking those people who enter Nepal illegally under control, keeping them in quarantine and testing them. Coronavirus testing facility and human resources have reached all 77 districts. We are conducting tests on people who came from other countries and who came in contact with them. Rapid Diagnostic Test (RDT) and Polymerase Chain Reaction (PCR) test are expedited. The first case was sent to Hong Kong since the country did not have the testing facility but in the last couple of months, we have testing facilities here.

“We do not risk the people’s lives in the name of saving the economy. Economy should be brought into life in every possible way but our first priority is to save life. Neither a child should be an orphan nor should a senior citizen be helpless. There wouldn’t be any politics, profit and loss in the economy is the secondary thing. Economy can be rejuvenated next year,” said Prime Minister Oli.

Prime Minister Oli said that there are some people who always play harsh tune against the government. He added that the PM against corruption.” I don’t have dual character. Investigations are underway in Lalita Niwas, wide body plane procurement and gold smuggling cases. Many of the criminals are already behind the bars. But executors of those crimes are playing the untimely tune. This government did not make any decision on those cases but started investigations into them. When the government brings the criminal who threw people into the furnace, they blame the government going against the spirits of good governance. There has been a progress in peace and governance,” said Prime minister.

He defended the decision to purchase health materials. “Health material procurement is not looked after by the Prime Minister’s Office, but a concerned department under the Health Ministry. Since normal procurement process does not work during the time of crisis, the government needs to bring in the materials via government-to-government or business-to-business contract in a fast track channel; it is the authority of the Director General of the Department of the Health Services. The department makes the decision and informs the ministry. The PM neither deals with procurements nor wants to earn money. My aim is to lead the country on the path of prosperity,” said PM Oli.

“However, the government officials should use their authority in a proper way. We are looking into the case. But I believe that no one should misappropriate public funds during the time of this crisis. There is a small section of people who have always been making statements against the government. Some of them actually want the government to fail even at the cost of the life of people. They think that there are no good people except them,” said PM Oli.

Regarding the recent demands for high-level mechanism, prime minister asked,”Have you heard about a high-level mechanism in any developed or developing country? Is there a mechanism in the USA including the democrats and republicans? Even the country where there is minority or joint government, does not have such mechanisms while we have a two-third majority here.”

“ We don’t need high-level mechanism. We have asked and received suggestions from the political parties, civil society, private sector and non-government organisations. We need the support from and coordination with all of them. This is the demand of some individuals not the organisations, this is an exception. They want to push the government in the trouble. Who is the civil society? Let’s make a high level mechanism led by the PM including all citizens of the country. Otherwise, who will decide whom to include and whom to exclude?”

“This government runs as per the public mandate and constitution. It will fulfil its responsibility in an accountable way. We are in dialogue with all concerned stakeholders.”

Regarding the allowing Nepali from abroad, Prime Minister Oli said,”they demanded that people should be allowed to enter Nepal and let them go to village with the virus. But the government wants to stop all wherever they are until the situation comes under control. We have talked to various countries about the well-being of Nepali nationals. I myself talked to the Indian Prime Minister and Crown Prince of the United Arab Emirates regarding the safety of Nepali nationals there while communications were also with Kuwait, Oman, Bahrain and Saudi Arabia.”

“As we cannot bring in our citizens to the country during the worsening situation, the government is talking with the respective governments. They have assured us of equal treatment to Nepali citizens as their own.”

Expressing displeasure over the role of media in current crisis, Prime minister Oli said,”I urge the media to report to the governments or Hello Sarkar if they find any citizen stranded or facing trouble due to lockdown rather than waiting for the story to be published the other day. It will be more constructive than criticising the government. Twenty four people are in stand by position round the clock to hear the problem and direct to the concern agencies. I request Nepal Television to run a programme to hear the grievance of people so that all the governments can take required actions.”

“This is not the time to exhibit nationalism or patriotism nor leave the situation at the nature’s will. India has kept 2186 Nepali citizens in quarantine camps and is providing food. Some people rejected Indian government’s request to stay in the hotel and came to the no mans’ land at the border. We have constructed a makeshift tent for them. Some intellectuals are worried that the COVID-19 has not spread rapidly and making provoking statement. They are criticising the government for not letting them in the country and reaching their home in the far flung villages. Sudurpaschim state has the risk of becoming epicenter of coronavirus. There are people who are turning the pages of the constitution and reminding the government about the right to mobility. Is this the time to implement constitutional provisions? Or mobilise all resources to manage the crisis?”

India Hands Over 150 ICU Beds To Nepal As Part Of COVID-19 Cooperation By NEW SPOTLIGHT ONLINE 6 days, 1 hour ago