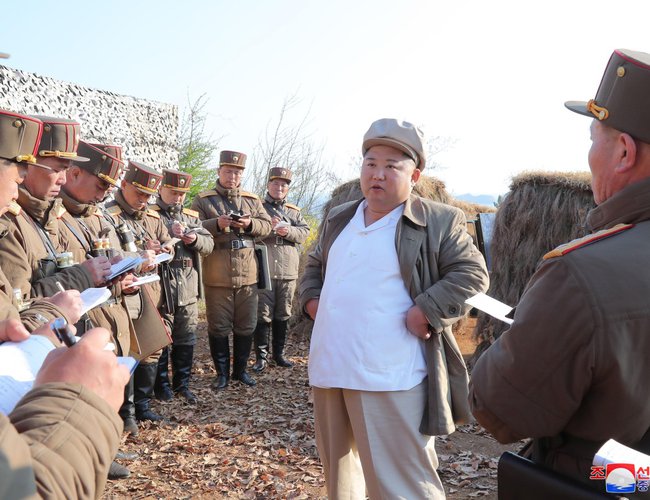 With North Korean leader Kim Jong-un missing from public view for two weeks, conflicting, unconfirmed accounts about his health, some even indicating his death or near-death, are raising tensions here.

Speculations swirled Sunday that Kim may be incapicitated, following a media report citing Shijian Xingzou, a vice director of Hong Kong Satellite Television, based on a “very solid source.”

Separately, Japanese magazine Shukan Gendai reported the 36-year old leader was in a “vegetative state” after undergoing heart surgery earlier this month, and that he is not expected to recover. South Korean media outlet Monthly Chosun also reported the leader was in coma.

The South Korean government maintains that “no unusual activity has been detected in North Korea.”

Despite the speculations, North Korea has kept mum on Kim’s health and whereabouts. The only mention was that he expressed thanks to workers building facilities in Samjiyon, situated near Paektusan, according to the North’s official Korea Central News Agency on Sunday.

Amid growing conjecture, a train likely belonging to Kim was spotted at Wonsan, a resort town along the country’s east coast where Kim has a holiday compound.

A satellite image unveiled by 38 North, the US-based North Korean monitoring website, said the 250-meter-long train has been parked outside of a railway station reserved for Kim’s family since at least April 21.

“The train’s presence does not prove the whereabouts of the North Korean leader or indicate anything about his health, but it does lend weight to reports that Kim is staying at an elite area on the country’s eastern coast,” it added.

Reuters on Friday reported that China had dispatched a team, including medical experts, to North Korea to advise Kim. But the report said it could not determine whether the dispatch was indicative of Kim’s health status.

The rumors concerning Kim’s health arose when he skipped an annual event at the Kumsusan Palace of the Sun on April 15 to commemorate the birth of his late grandfather, national founder Kim Il-sung. Kim Jong-un was last seen April 11, when he presided over a politburo meeting of the ruling Workers’ Party.

Multiple reports followed after Kim’s unusual absence at one of the country’s most important events, including that the regime’s leader is in “grave danger” after botched cardiovascular surgery.

This, however, is not the first time Kim has been out of sight from the public eye. In 2014, he was absent for about six weeks from state media reports, leading North Korean watchers to believe he had health issues. Later, he reappeared with a cane, with South Korea’s National Intelligence Service saying he had a cyst removed from his ankle.

Speculation about North Korea is difficult to verify from the outside due to tight controls of information. But this time, the unconfirmed coverage is gaining traction once again because Kim has been suffering health problems and has a long family history of heart issues.

Kim, who is a heavy smoker, has put on weight rapidly since he assumed power in 2011 and is also believed to suffer from high blood pressure and diabetes.

Both Kim’s father and grandfather died of heart failure, in 2011 and 1994, respectively.