Over 2,000 Nepalis Stuck In Pithargaud and Dharcula In India Allowed To Return Home

Over 2,000 Nepalis Stuck In Pithargaud and Dharcula In India Allowed To Return Home 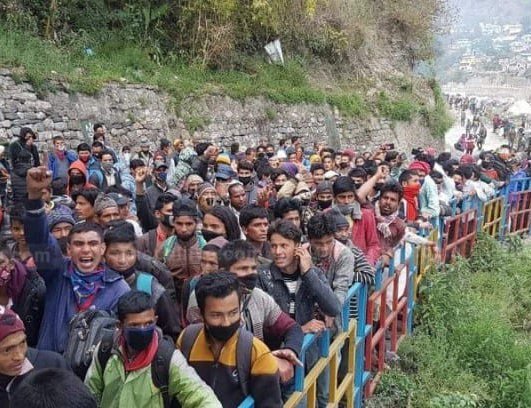 Over 1000 Nepalis who had been staying in quarantine in India for 34 days returned to Nepal via Khalanga and Dattu border points on Thursday. Similarly, over 1000 Nepalese who are stranded in Jhulaghat also allowed entering Nepal.

After the international borders between Nepal and India got sealed following the lockdown in both the countries, 1,061 Nepalis of 10 districts including Darchula, who were working at Pithauragadh district of India and returning home after the lockdown, were kept at five different quarantines between Dharchula and Jauljibi of India.

Although their quarantine period had completed, the government of both nations had not made a decision to send the Nepalis back home.

"Both the countries agreed on sending the Nepalis to their home on Wednesday, said Tek Singh Kunwar," assistant Chief District Officer of Darchula. "They were brought to Nepal this morning in coordination with District Officer of Pithauragadh of India."

Preparations are underway to send them to their concerned local levels by conducting primary health tests.

Assistant CDO Kunwar said that all of the returnees would mandatorily be kept in quarantine for 14 days and they would be sent home only after they test negative in the COVID-19 test.

He also informed that all of the Nepalis were brought to Nepal by maintaining social distancing.

Dilendra Mahata of Marma Gaupalika-6, who had stayed at Joulbibi-based quarantine in India said, "Though late, I am happy to be returning to my homeland."

Around 850 Nepalis staying at Jhulaghat border of Baitadi district will be brought to Nepal today. Hundreds Of Undocumented Nepalese Migrant workers Applied To Return Home Under An Amnesty Announced By Kuwait

India Provides Grant For The Construction Of New School Building In Butwal By NEW SPOTLIGHT ONLINE 1 day, 22 hours ago

PM Oli Adopted A Rhino By Agencies 2 days, 11 hours ago

338 Households Displaced In Fungling Due To Fire By Agencies 3 days, 1 hour ago

Chanda Led Maoist And The Government To Hold Talks By NEW SPOTLIGHT ONLINE 3 days, 11 hours ago