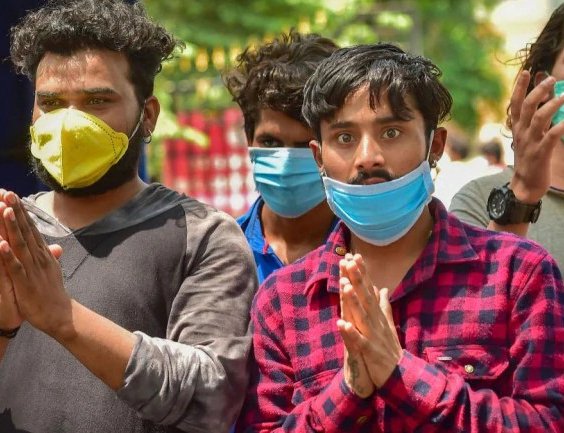 India’s Union Health Minister Harsh Vardhan said India is doing better compared to other countries on all parameters in its fight against Covid-19 and should be able to win this decisive war in the coming few weeks reports India Today.

Minister claimed that India has 'gone quite ahead' on its way to winning the war against Covid-19. The statement from Union Health Minister Harsh Vardhan came as his ministry claimed that India's coronavirus recovery rate has reached 25 per cent with just 3.2 per cent mortality rate, even as the toll from the deadly virus neared 1,100 and the national tally climbed to over 33,600.

Union Health Minister Harsh Vardhan said India is doing better compared to other countries on all parameters in its fight against Covid-19 and should be able to win this decisive war in the coming few weeks.

Meanwhile, the states began preparations to help lakhs of migrant workers and students reach their homes from different parts of the country where they are stranded for over a month due to the Covid-19 lockdown.

As the nation nears the end of the Lockdown 2.0, the economic fallout of the strict restrictions has started to become increasingly visible. A study by the International Labour Organisation has claimed that almost 50 per cent of the global workforce faces job loss. Its effects in India are also increasingly visible as industry experts say it will take around six quarters for several industries to get back on their feet.

Even as India reported 1,823 new cases and 67 deaths due to Covid-19, the Union Health Ministry claimed that India is on the path of victory as the recovery rate has reached over 25 per cent.

As per Union Health Ministry data, the total death toll due to Covid-19 rose to 1,075 and the number of cases climbed to 33,610 in the country on Thursday. The number of active Covid-19 cases stood at 24,162, while 8,372 people have recovered, and one patient has migrated, the ministry said.

"Thus, 24.90 per cent patients have recovered so far," a senior Health Ministry official said. The total number of cases include 111 foreign nationals.

A total of 67 deaths were reported since Wednesday evening of which 32 fatalities were from Maharashtra, 16 from Gujarat, 11 from Madhya Pradesh, three from Uttar Pradesh, two each from Tamil Nadu and Delhi and one from Karnataka.

The death toll reached 27 in Tamil Nadu, 26 in Telangana, 22 in West Bengal while Karantaka reported 21 deaths. Punjab has registered 19 fatalities so far. The disease has claimed eight lives in Jammu and Kashmir, four in Kerala, while Jharkhand and Haryana have recorded three Covid-19 deaths each.

Bihar has reported two deaths, while Meghalaya, Himachal Pradesh, Odisha and Assam have reported one fatality each, according to the ministry data.

According to the Health Ministry data updated in the evening, the highest number of confirmed cases in the country are from Maharashtra at 9,915, followed by Gujarat at 4,082, Delhi at 3,439, Madhya Pradesh at 2,660, 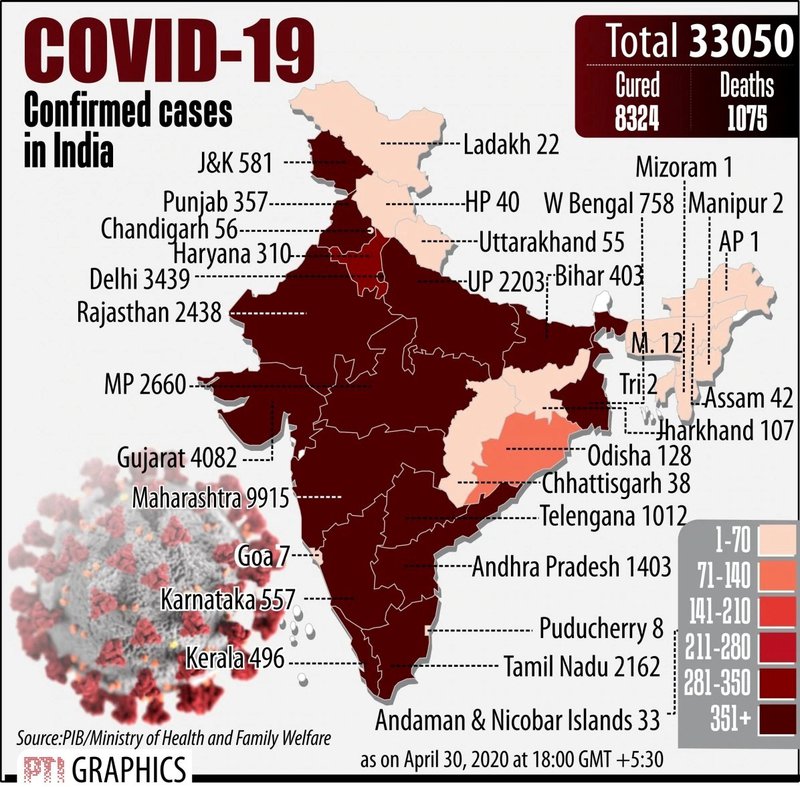 Manipur and Tripura have two cases each, while Mizoram and Arunachal Pradesh have reported a case each.

"Our figures are being reconciled with the ICMR," the ministry said on its website adding, "280 cases are being assigned to states for contact tracing."

States wise distribution is subject to further verification and reconciliation, it said. Bengal attributes 72 of 105 deaths to co-morbidities

At least 105 patients diagnosed with Covid-19 have died in West Bengal -- 33 directly due to the disease and the rest because of co-morbidities, Chief Secretary Rajiva Sinha said on Thursday.

Eleven people have died due to coronavirus infection recently in Bengal, he said, adding that an experts committee constituted by the state government for conducting an audit into Covid-19 deaths submitted its report to the health department earlier in the day.

"The expert committee has examined altogether 105 cases. Of that, 33 were found to have died due to Covid-19 infection. And the rest 72 deaths were attributed to comorbidities, where Covid-19 was incidental. The committee submitted its report today and these figures are not of a single day," Sinha said told reporters at the state secretariat.

With over more than 8,300 people recovered of novel coronavirus in India, the country's recovery rate has reached 25.19 per cent from 13 per cent a fortnight ago.

While virtually interacting with civil society organisations (CSOs) and non-governmental organisations (NGOs) on Covid-19 issues at an event organised by Niti Aayog, the Union health minister said, "We have gone quite ahead towards winning this war against Covid-19."

Elaborating further, he said the country has done better on "all our parameters compared to the rest of the world. And I am sure in the coming few weeks, we should be able to win decisive war against Covid-19".

At a press briefing on the Covid-19 situation, Health Ministry's Joint Secretary Lav Agarwal also said the doubling rate for Covid-19 cases has improved to 11 days as against 3.4 days before the lockdown was imposed.

India's recovery rate is comparable to global 30.6 per cent and death rate is almost half of the global rate of 7.1 per cent.