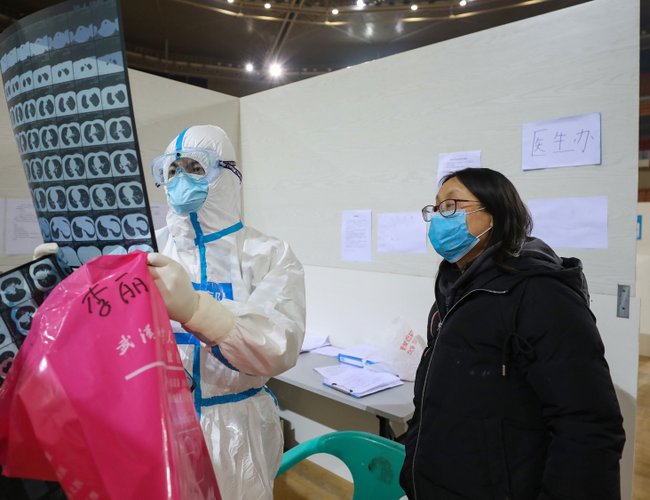 Dr Bikash Devkota, spokesperson of the Ministry of Health and Population (MoHP) said that three persons, one from Kathmandu and two from Birgunj, who were discharged after recovering from COVID-19, have tested positive for the virus in the follow up test done through PCR technique.

A 51-year old male of Suncity Apartment, Kathmandu, tested positive for the virus again, a week after he was discharged from Patan Hospital, informed He said that two patients of Birgunj were kept in isolation.

But, just because you recover from the virus does not mean you cannot catch it again, WHO confirmed in a statement released on 24 April.

More than 260 COVID-19 patients in South Korea tested positive for the coronavirus after having recovered, raising alarm that the virus might be capable of "reactivating" or infecting people more than once. But infectious disease experts now say both are unlikely.

Rather, the method used to detect the coronavirus, called polymerase chain reaction (PCR), cannot distinguish between genetic material (RNA or DNA) from infectious virus and the "dead" virus fragments that can linger in the body long after a person recovers, Dr. Oh Myoung-don, a Seoul National University Hospital doctor, said at a news briefing Thursday (April 30), according to The Korea Herald. Also Reads COVID-19

These tests "are very simple," said Carol Shoshkes Reiss, a professor of Biology and Neural Science at New York University, who was not involved in the testing. "Although somebody can recover and no longer be infectious, they may still have these little fragments of [inactive] viral RNA which turn out positive on those tests."

That's because once the virus has been vanquished, there is "all this garbage of broken-down cells that needs to be cleaned up," Reiss told Live Science, referring to the cellular corpses that were killed by the virus. Within that garbage are the fragmented remains of now non-infectious viral particles.

To determine whether or not someone is harboring infectious virus or has been reinfected with the virus, a completely different type of test would be needed, one that is not typically performed, Reiss said. Instead of testing the virus as it is, lab technicians would have to culture it, or place that virus in a lab dish under ideal conditions and see if it was capable of growing.

Patients in South Korea who re-tested positive had very little to no ability to spread the virus, according to the Korea Centers for Disease Control and Prevention, the Korea Herald reported.

Reports of patients testing positive twice aren't limited to South Korea; they have also poured in from other countries, including China and Japan. But the general consensus in the scientific community — with all the information available to date on the new coronavirus — is that people aren't being reinfected, but rather falsely testing positive, Reiss said.

What's more, "the process in which COVID-19 produces a new virus takes place only in host cells and does not infiltrate the nucleus," or the very core of the cell, Oh said during the briefing, the Herald reported. Here's why: Some viruses, such as the human immunodeficiency virus (HIV) and the chickenpox virus, can integrate themselves into the host genome by making their way into the nucleus of human cells, where they can stay latent for years and then "reactivate." But the coronavirus is not one of those viruses and instead it stays outside of the host cell's nucleus, before quickly bursting out and infiltrating the next cell, Reiss said.

"This means it does not cause chronic infection or recurrence," Oh said. In other words, it's highly unlikely that the coronavirus would reactivate in the body soon after infection, Reiss said.

But reinfection at some point is a theoretical possibility. "We don't know what's going to happen a year from now, nobody has that kind of crystal ball," Reiss said.

Reassuringly, the virus is currently undergoing very small genetic changes that are "too tiny" to evade the immune systems of people who have already been infected. The genetic changes would have to be substantial enough that a person's existing antibodies to SARS-CoV-2 would no longer work against a new strain. So far, that seems unlikely.

"If this virus remains as it is [with] really tiny changes … then it's highly unlikely" that a person would be reinfected next year, Reiss added.

In the best-case scenario, which Reiss thinks is likely, the virus will behave like the virus that causes chickenpox, "imprinting" on the host immune memory. Then, even if antibody levels drop over time, people will retain a population of memory cells that can rapidly boost production of more antibodies if they are exposed to the virus again, Reiss said. Of course, this is still an "assumption," and it will be some time before we can fully understand the strength of the army the immune system creates against this virus — and whether that army's protection is long-lasting.

"There is currently no evidence that people who have recovered from Covid-19 and have antibodies are protected from a second infection," the organisation said.

According to Li QinGyuan, director of pneumonia prevention and treatment at China-Japan Friendship Hospital in Beijing, those who have been infected with Covid-19 develop a protective antibody - but it isn’t clear how long the protection lasts.

"However, in certain individuals, the antibody cannot last that long," Li told USAToday. "For many patients who have been cured, there is a likelihood of relapse."

This means that people who initially recovered are more likely to relapse rather than get reinfected with the virus.

According to one study, people with mild infections can test positive for the virus by throat swabs “for days and even weeks after their illness”.

But, that doesn’t mean it isn’t possible to contract the disease again, especially in those who are immunocompromised.

While further studies are needed to understand whether it is possible for an individual to be reinfected with new coronavirus, experts recommend those who have been infected follow the hygiene steps outlined by CDC, which include staying away from people who are sick, frequently washing hands, and covering coughs and sneezes.