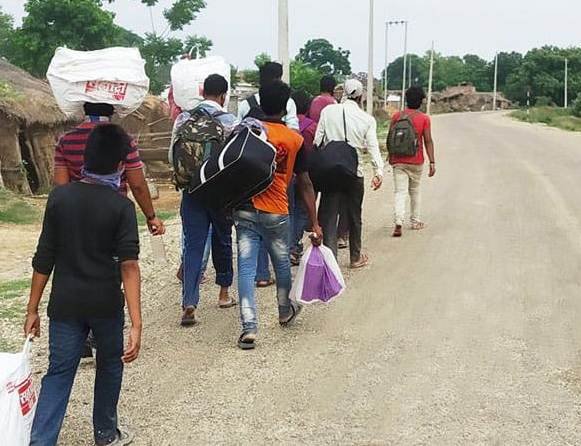 Four districts in Southern Nepal are emerging as hotspots of COVID-19. After some containment in Udayapur, Banke, Parsa, Rautaht and Rupandehi are now in very critical situation.For the past week, even the numbers of cases in Parsa has gone down. However, Rautaht and Banke are forefront in the past few days. As the numbers of migrant workers from India continues to enter in Nepal, the risk of spread of COVID-19 is going to be higher.

Narainnpur Rural Municipality of Banke District has been declared as a hot spot of COVID-19 Nepal after identification of 67 cases. According to District Public Health Office Banke, the district has now 93 cases.

A day after the second COVID-19 death in Nepal occurred in quarantine at Narainapur-5, in the eastern part of Banke district, the area has further reported 59 positive cases on Monday.

With this, the total number of COVID-19 cases in Narainapur Rural Municipality alone has reached 67. Bordering with India, Narainapur is located 35kilometres south east from the Banke district headquarters, Nepalgunj.

And east of Rapti River, the village is in complete isolation from rest of Banke district.

After the death and spike in cases, Narainapur has been declared as a hotspot and sealed off from all four sides. The detection of a high number of cases in a single day has left not only Narainapur but everyone in Banke worried.

Assistant Chief District Officer of Banke Hari Pyakurel said that the area had been sealed off and the administration and security forces, including Nepal Police, Armed Police Force and Nepal Army had been deployed in the area by exercising high caution. Travel to and from Narainapur has been closed and high security alert is in place, Pyakurel added.

With the high number of cases, it has sent shock waves throughout Narainapur with families of those under quarantine panicking, said Naraianpur Rural Municipality’s chair Istiyak Ahmad Sah.

Earlier in Banke, 25 COVID-19 cases were detected in Ward Number 8 of Nepalgunj Municipality and all of them are undergoing treatment in isolation at Khajura-based Hospital.

200 isolation beds to be added in Banke, quarantine condition to be improved. Meanwhile, owing to high number of cases and a death, a meeting of the District-level COVID-19 Crisis Management Centre held in Nepalgunj under the chairmanship of Banke’s Chief District Office Kumar Bahadur Khadka in the presence of State 5’s Minister of Social Development Sudarshan Baral decided to add 200 isolation beds in the district. With the increase in cases, Baral is in Nepalgunj and coordinating the response efforts.