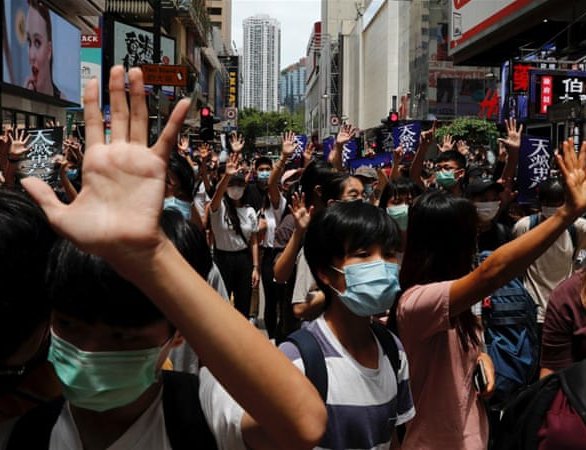 Critics say the new law would infringe on Hong Kong's autonomy and the civil liberties of its residents.

China's proposed national security legislation for Hong Kong could lead to US sanctions and threaten the city's status as a financial hub, the White House has said.

The two superpowers are in a deepening war of words amid disputes over the handling of the coronavirus pandemic and trade deals.

"It looks like with this national security law they're going to basically take over Hong Kong and if they do ... Secretary [of State Mike] Pompeo will likely be unable to certify that Hong Kong maintains a high degree of autonomy.

"And if that happens there will be sanctions that will be imposed on Hong Kong and China," National security adviser Robert O'Brien said in an interview with NBC.

The statement came as the US continues to scale up its condemnation of the proposed law, with Pompeo on Friday calling Beijing's plan to bypass Hong Kong's legislative processes a "death knell" for the territory's autonomy.

The proposed bill, submitted on Friday on the opening day of China's largely rubber-stamp national legislative session, would forbid secessionist and "subversive activity", as well as foreign interference and "terrorism" in Hong Kong, which rejoined mainland China from British rule in 1997 under a so-called "one country, two systems" agreement.

Taliban Regime Bans Female From Working In Afghanistan By Agencies 2 hours, 18 minutes ago

France Recalls Envoys from The US And Australia Amid Security Pact Row By Agencies 1 day, 1 hour ago

Change Of Power In Afghanistan Not Inclusive: Indian PM Modi At SCO Summit By Agencies 2 days, 1 hour ago