Nepal,Israel Exchange Greetings On 60th Anniversary Of Establishment Of Relations 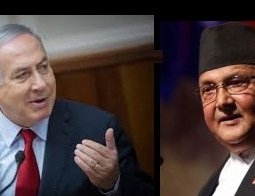 Prime Minister K P Sharma Oli held telephone conversation with his Israeli counterpart Benjamin Netanyahu today and exchanged greetings and best wishes on the occasion of the 60th anniversary of the establishment of diplomatic relations between Nepal and the State of Israel,

The two Prime Ministers expressed satisfaction on the state of bilateral relations that grew and consolidated in the past 60 years and agreed to further strengthen it in the future. The two leaders highlighted the importance of increased level of engagements at bilateral and multilateral forums, people to people contacts and Nepal-Israel cooperation. They agreed on the exchange of high-level visits at an appropriate time for the expansion and deepening of bilateral cooperation.

The two Prime Ministers talked about the highly developed technology that Israel has pioneered in many areas. Prime Minister Oli stressed on the need of transfer of such technology in priority areas of Nepal such as agriculture and health. He also appreciated the Government of Israel for taking care of Nepali nationals in Israel who stand as a bond of friendship.

The conversation also covered the global fight against COVID-19 and its impact in the economic and social lives of the people. Prime Minister Oli shared the measures taken by the Government of Nepal for containing the virus and protecting the lives of the people and admired effective measures taken by Israeli Government to control the spread of the virus.

Earlier today, Minister for Foreign Affairs, Pradeep Kumar Gyawali and the Foreign Minister of Israel, Gabi Ashkenazi, exchanged separate messages of greetings. In the message, the two Foreign Ministers have expressed happiness over the 60 years of friendship and cooperation between the two countries and touched upon the potential areas of expanding cooperation, including trade, human resources and agriculture among others.

According to Ministry of Foreign Affairs ,Nepal and Israel established diplomatic relations on 1 June 1960.