Science And Technology Not A Priority In Nepal’s Budget

Finance Minister Dr. Yubaraj Khatiwada presented Rs 1.47 trillion budget (USA $ 13.71 billion) in the parliament last month with a promise of 2.3 percent double-digit economic growth and focus on revitalizing the economy from Covid-19. He allocated Rs 395 billion more allocations to the health, infrastructure and agriculture sectors. The Ministry of Education, Science and Technology got Rs 171.71 billion—11.64% of the budget. Education features include new initiatives such as ‘one school one game teacher,’ school building, scholarship with a total of 17 billion but investment in STEM is not prioritized and mentioned.

The investment in the Research and Development (R&D) was less than 0.1% until 2009 and subsequent increase to 0.3 % in 2009 to 0.45% by 2020 show a positive trend but such an increase is a face-saving exercise only. Allocation of Rs 110 billion for Madan Bhandari Science and Technology University and Science-Tech Lab in every province and plan to National Biotechnology Center (NBC) since last fiscal year are all promising steps but lack of strong leadership, commitments and politicization of education and S&T sectors are compounding the problems.

Nepal needs to make a quantum jump and take a bold decision and increase R&D investment to at least 2 % of GDP. In addition to existing R&D public and private S&T infrastructures such as government departments, University and Industrial laboratories, there is a strong need to set up Center of Excellence and National Laboratories in specific areas, create innovations, collaboration and start-up funds to trigger and drive entrepreneurial R&D cultures to benefit and keep abreast with emerging science and technology. The above initiatives will serve as an R&D growth center and provide a platform for training and collaboration.

Science and Technology (S&T) is the engine and backbone of economic growth and prosperity. Research and Development investment in Science and Technology is competitive, expensive and long term. Global R&D is currently 1.7 trillion dollars and 80 percent of this investment is by the top ten countries. China is on the top and its R&D growth curve is like the early stage of COVID pandemic graphs, a strong upward steep rise, unlike most countries flattening the R&D curve. The real competition is between the USA and China to be a global leader in innovation, to consolidate their position in the economy and military strengths. China’s overall R&D investment is $511 billion (2.19% of GDP) compared to the US $ 550. billion (2.7 % of GDP).

India is also following the trend but is far behind with US$ 66 billion (<1%). This investment is reflected on their key performing indicators, the number of patents (China 5 lakhs, USA 3 lakhs, India 50 thousand per annum) and follow a similar trend in publication. Future of global R&D innovation is driven by quantum and computing science in medicine, agriculture, artificial intelligence, 3D printing, drones, robotics, genetics, and innovation will become fiercely competitive and expensive.

Low R&D investment for decades remains a million-dollar question. In Nepal, R&D activities commenced in 1977 in Government departments and Tribhuvan University (TU)’s and later through the establishment of NAST, Nepal Agricultural Research Council (NARC) and the Ministry of Science and Technology (MoST), Research Center for Applied Science and Technology (RECAST), Center for Environmental and Agricultural Policy Research (CEAPR) in the 1980s. In the last 40 years or so, R&D efforts failed to make any impact and experts attribute this to poor commitments and resources. Nepal R&D investment of roughly 0.45% of GDP 29.4 billion and human resources post-graduate and higher education manpower ~ 200,000 is evidence of our poor vision.

There is also a strong need to set up a dedicated and independent department run by the Board of Trustees comprised of highly acclaimed scholar entrepreneurs and investors who will drive above agenda and advice both Federal and State Governments independently. The University also needs to change its primary focus and include R&D as a core activity besides providing quality education. Their funding also should be tied to R&D performances.

NRNA Science Knowledge and Technology Department (SK&TT) could also play a major role and act as a conduit between Nepal and Global R&Ds to mobilize diaspora expertise, experience and networking to help in technology transfer, exchange of scholars, collaboration, incubation and innovation funds and co-partner with the Government in innovation journey to make Nepal a knowledge-based nation and become a global player. 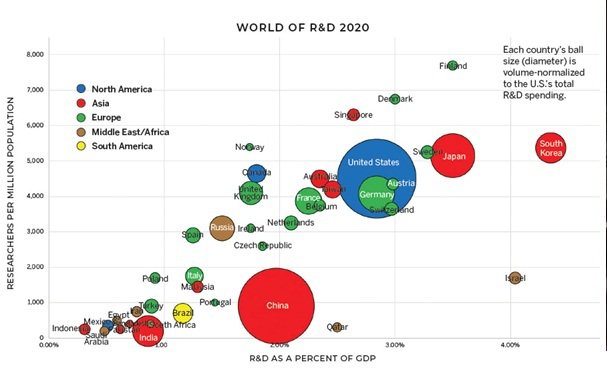 Dr Adhikari is a scientist based in Melbourne, and involved with NRNA Skill Knowledge and Technology Transfer Department and Nepal Science Foundation Trust. He can be reached at r_adhikari@hotmail.com

ADB PROJECTION: Nepal To Grow By 3.1% By A Correspondent 3 days, 18 hours ago