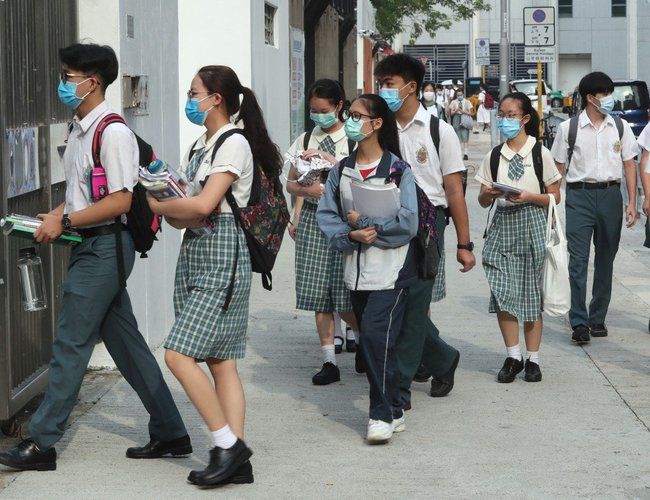 Hong Kong’s Education Bureau has asked school heads to report on their support measures for students and guidance plans for those arrested amid the resurging social unrest.

In a circular issued on Tuesday, the bureau urged schools to “nurture students’ positive values and positive thinking”, also asking them to encourage pupils to rectify inappropriate behaviour.

It pointed to police figures showing 40 per cent of cases related to the anti-government protests involved students.

“Recently, there have been more cases of prosecution and conviction. The situation is distressing and worrying,” the circular said. Apart from imparting knowledge, schools also had a responsibility to cultivate virtue, it said.

Notes marking the first anniversary of protests are seen behind students at a ‘Lennon Wall’ on Hiu Ming Street in Kwun Tong. Photo: Nora Tam

Notes marking the first anniversary of protests are seen behind students at a ‘Lennon Wall’ on Hiu Ming Street in Kwun Tong. Photo: Nora Tam

“For students who have deviations in behaviour or even values, schools have the responsibility to strengthen the work in assisting the students to develop positive thinking, as well as good character and behaviour,” it said.

Among the 8,981 people arrested over the anti-government protests since June last year, 3,664 were students, including 1,602 secondary school pupils and eight primary ones.

A form has been distributed to schools to report on the support measures and whether progress has been made. They have until the end of September to return them.

The bureau’s circular asked the schools to develop long-term, personalised guidance and discipline plans for the arrested students. But it also reminded them such plans should not affect the relevant judicial proceedings.

“For instance, it is inappropriate to discuss the evidence or how to deal with the relevant litigation with the students concerned,” it said.

Teddy Tang Chun-keung, chairman of the Hong Kong Association of the Heads of Secondary Schools, said the bureau’s instructions were vague and he hoped authorities would explain the purpose of the “additional administrative work”.

Tang said schools had always provided support to students in need and he believed school heads would not consider it a move by authorities to tighten control over them.

“But the form is a new thing,” he said. “Many school heads hope the authorities will explain more on how to report back to them, like, what details they would like us to report. The form does not ask schools to report if they have students getting arrested in protests. But after all, it is additional administrative work.”

Last week, Education Secretary Kevin Yeung Yun-hung asked schools to discipline any students or teachers who intended to join a planned strike and class boycott over Beijing’s imposition of a national security law on Hong Kong.

In a reply to lawmakers on Wednesday, the Education Bureau said about 100 members of staff from secondary and primary schools in Hong Kong, as well as 10 at tertiary-level institutions, had been arrested during the anti-government protests that broke out last year.

“No cancellation of registration of the teachers concerned has been recorded so far,” it said.

The bureau said it would look into the circumstances surrounding the teachers’ arrests to determine whether any misconduct was involved, adding their professional status may also be reviewed.

“For serious misconduct cases, the [bureau] may consider cancelling the registration of the teachers concerned or refusing their registration applications,” it said, vowing also to “ferret out” the small number of teachers “who have broken the law, breached the rules and violated moral standards”.

Meanwhile, a survey by a local teachers’ union found over a third of teachers said they had been asked by their supervisors to steer clear of political topics on campus, while four in five said they avoided holding discussions on sensitive subjects in class.

About 80 per cent worried about being the subject of parents’ complaints or doxxing because of their political views, while 60 per cent said they avoided joining marches and two-thirds refrained from using social media.

Conducted by the Professional Teachers’ Union, the survey also found 90 per cent of teachers were losing confidence in the autonomy of the profession in the wake of what was deemed “suppression” by education authorities regarding the handling of recent controversies in the sector.

The union interviewed 1,185 teachers, headmasters and senior administrative staff in primary and secondary schools and kindergartens, as well as special schools, between June 2 and 10.

“Schools and teachers are forced to waste time and effort to deal with political nuisance from the outside,” Fung said.

Hong Kong’s education sector has stepped into a brewing political storm triggered by the anti-government protests that began last June. Between last June and March this year, the Education Bureau received 192 complaints of teacher misconduct related to the unrest.

Wrongdoing was substantiated or likely substantiated in 93 of 144 cases in which investigations were substantially completed. About 80 teachers and teaching assistants were arrested for offences related to the protests.

Examination authorities struck out a controversial test question in the history paper of this year’s university entrance examination on whether Japan “did more good than harm to China” in the early 20th century, following a request by the bureau.

In a strongly worded commentary, China’s state-run news agency Xinhua called the question “poisonous”, saying: “Hong Kong’s education system is a place where the worst elements of society are assembled and students are being poisoned.”