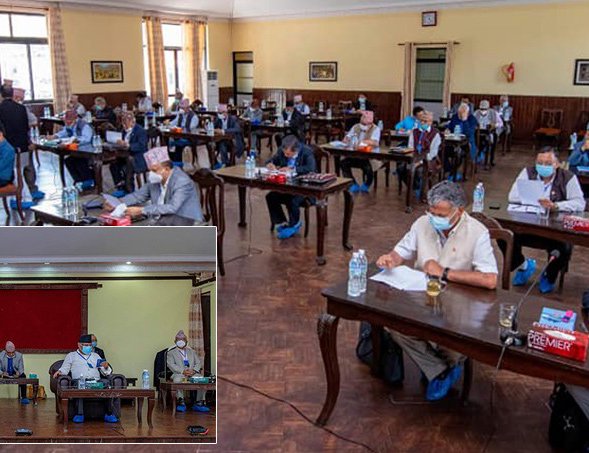 As all senior leaders and majority members of standing committee demanded his resignation, Prime Minister KP Sharma Oli was in defense. Following his statement charging India for working to pull down his government, it angers party leaders and members.

Co-chair of the ruling NCP Pushpa Kamal Dahal and other senior leaders of the party Jhalanath Khanal and Vice-chair Bamdev Gautam were among those who asked Oli to step down as PM on the third day of the Standing Committee meeting.

Khanal demanded the resignation of Oli as well as party co-chair for his ‘inefficiency in running the government and the party’.

Most of the leaders who spoke today were of the view that Oli should resign as the PM, but there were some who sought his resignation from both the top posts.

The PM, on the other hand, told the Standing Committee that he had received information about meetings being held in hotels to remove him from the PM’s post reports The Himalayan Times.

According to NCP spokesperson Shrestha, discussion was centered on whether there is any involvement of NCP rank and file in the registration of the new party and on the issue that NCP leaders were active to topple the government.

CPN(UML) Nepal Faction Divides Over Joining The Government By Agencies 6 hours, 8 minutes ago

CPN (Maoist Center), Decides To Give Full Shape To Cabinet At Earliest By Agencies 4 days, 5 hours ago

PM Deuba Wins Vote Of Confidence In HoR By Agencies 2 weeks, 4 days ago

UML POLITICS Divided We Stand By A Correspondent 2 weeks, 5 days ago

MPs Have No Choice Other Than To Vote Deuba By Keshab Poudel 2 weeks, 6 days ago