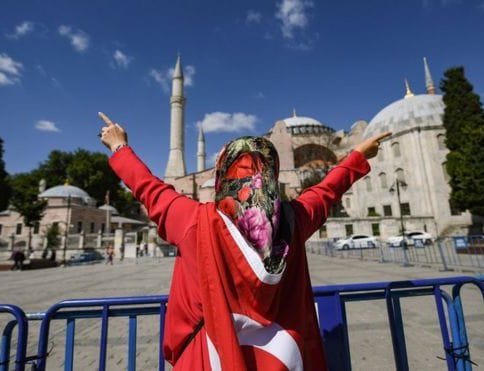 President Tayyip Erdogan declared Istanbul’s Hagia Sophia a mosque on Friday with the first Muslim prayers to begin in two weeks, after a top court ruled the ancient building’s conversion to a museum by modern Turkey’s founding statesman was illegal.

Erdogan spoke on Friday just hours after the court ruling was published, brushing aside international warnings not to change the status of the nearly 1,500-year-old monument that is revered by Christians and Muslims alike.

The United States, Russia and church leaders were among those to express concern about changing the status of the UNESCO World Heritage Site, a focal point of both the Christian Byzantine and Muslim Ottoman empires and now one of the most visited monuments in Turkey.

Greece’s culture ministry described the court decision as an “open provocation” to the civilized world, while UNESCO said it regretted it was not notified ahead of time and would now review the building’s status.

Erdogan has sought to shift Islam into the mainstream of Turkish politics in his 17 years at the helm. He has long floated restoring the mosque status of the sixth-century building, which was converted into a museum in the early days of the modern secular Turkish state under Mustafa Kemal Ataturk.

A Deadly 'Terror' Attack In Vienna By Agencies 6 months, 2 weeks ago