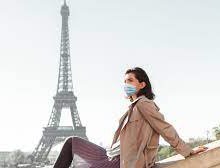 France has entered a third national lockdown as a recent surge in the number of new cases infected with a coronavirus variant has overwhelmed the country's healthcare system.

The coronavirus variant initially confirmed in Britain has spread across France, bringing the daily tally of new cases to nearly 60,000.

More than 5,200 people are being treated in intensive care units. The figure is higher than that recorded in the peak last fall.

The French government extended restrictions on people's outings and operating hours of retail shops in the capital, Paris, and parts of northern regions to the entire country on Saturday evening.

It is the third time that nationwide restrictions on outings are in place following those introduced in the spring and autumn of last year. The current measures will last for four weeks.

This time, the government decided to close schools for the first time for either three weeks for kindergarteners and primary school pupils and four weeks for older students starting Tuesday.

Unlike the two previous lockdowns, people are allowed to move within 10 kilometers from their homes during the day.

But there are doubts about the effectiveness of the measure as the restrictions in Paris have had little impact on the number of people out and about since they were imposed in mid-March.

French President Emmanuel Macron seeks to boost the country's intensive care unit capacity from the current 7,000 beds to more than 10,000.

He also plans to speed up the government's vaccination efforts by establishing large venues for inoculation.

EU Delegation Refutes News By A Correspondent 1 year, 2 months ago

UK Variant 'May Be More Deadly' By Agencies 1 year, 8 months ago

A Deadly 'Terror' Attack In Vienna By Agencies 1 year, 11 months ago