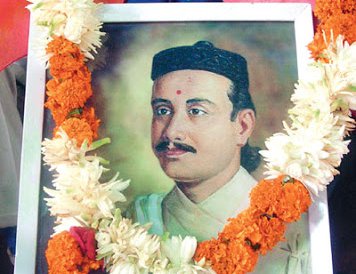 207th birth anniversary of Aadi Kavi Bhanu Bhakta Acharya being marked today by Nepali speakers in Nepal, India and all over the world amid Coronavirus Pandemic.

Bhanu Jayanti is a celebration of the birth anniversary of Bhanubhakta Acharya. It falls on the 29th day of the month of Ashad according to Nepali calendar. It is celebrated every year by Nepal government and Nepalese people as well as by the Nepali speaking people around the world.

Acharya is the first poet of the Nepali language. He is highly honored for translating the epic, Valmiki’s Ramayan, in the local dialect about 150 years ago. Bhanubhakta’s Ramayan is known as the first major literary work in Nepali.

Bhanu jayanti is celebrated to remember that Great Poet who had used Nepali script for the first time to write a Nepali poem.

He gives his life to cutting grass and earns little money,

he hopes to make a well for his people so he will be remembered after death,

I have achieved nothing though I have much wealth.I have neither made rest houses nor a well,

all my riches are inside my house.

This grass-cutter has opened my eyes today,

my life is worthless if the memory of my existence fades away.

Bhanubhakta was born in a very wealthy Brahmin family of Chundiramgha, Tanahu on B.S. Asar 29, 1871. His grandfather Shrikrishna Acharya who was very well known of his time.He received an excellent education with a strong leaning towards religion at home from his grandfather.

When Bhanubhakta was 22 years, he was influenced by a incident so much that made him to turn out a poet. One day he encountered a grass-cutter and in their conversation he found that the grass-cutter wanted to give something to society so that he could be remembered after death too.

After listening to the grass-cutter answer Bhanubhakta felt ashamed of himself.It not only sparked literary creativity in Bhanubhakta but also inspired him to do something noble, which eventually resulted in his translation of the great epic Ramayana from Sanskrit into Nepali and he made it to accessible, readable and understandable for a wide range of Nepali people. And because of his noble work Bhanubhakta and Nepali language became synonym in Nepali literature.

Poet Bhanubhakta was not only a romantic but a satiric poet too. Other remarkable books by him are Badhu Sikshya, Bhakta Mala and Prasnottar Mala.